Boys Are Still Boys — Even at Harvard

RUSH: Harvard.  “Harvard Cancels Men’s Soccer Season Over Sexually Explicit ‘Scouting Reports’ — Harvard University announced Thursday that it would forgo the remainder of its men’s soccer season after the school’s lawyers found several ‘scouting reports’ prepared by team members that assessed members of the women’s team based on their physical appearance. The Ivy League school’s newspaper, The Harvard Crimson reported last week that members of the 2012 team created a document rating each of that year’s women’s soccer recruits on a numerical scale and assigning them a sexual position.”

I’m not trying to be funny.  I’m not trying to get your attention by saying something outrageous.  It is something that is part of our culture.  Boys have been raised to believe that in their natural state, they’re unacceptable. They are predators; they are potential rapists; they are rough, insensitive, selfish, all of these things, as defined by women.  So the chickfication of the education system — and there’s no other word for it. All it means is that women now dominate positions of power in education, and they have done their best to redefine masculinity.

I’ve even had a couple of stories in the past couple of weeks about that very thing, about how colleges are actually attacking the notion of masculinity as though it is a negative trait.  Look, folks, if you are new to the program, if you’re just tuning in because it is election time and you want to see what is going on, do not doubt me on this.  I know this sounds funny and cliched, and I know how sensitive people have been made in our culture today, that it’s safer to conform. It’s safer to go along, don’t make waves.  But I’m telling you, this makes perfect sense.

They have spent at least a generation trying to convince and teach boys not to act like boys.  That’s why I made reference to the opening scene in Hacksaw Ridge.  Nobody will think a thing of it, except I did. See, I’ve been trained to spot the politics in everything because the left politicizes everything.  I’m just telling you, you watch it. Go see this movie with friends.  I guarantee you in opening scenes you’re going to have some people say, “Do you believe what they used to let kids do?  We would no more let our kids do this…”

Yet what you’ll see portrayed in this movie is the way you used to grow up in this country.  We are trying to take masculinity away from men.  They have spent their lifetime in schools trying to pound into young boys’ brains that being a man is a bad thing, or potentially.  If you don’t get a handle on it.  If you don’t get control of it.  What’s amazing is despite these efforts… You know what this is like?  Back in the early days of the modern era of feminism… Some of you may be too young to remember. In the late ’60s, early ’70s, what they tried…

So what these parents did is they gave all that girl stuff to the little boys and they gave G.I. Joe dolls and all that to little girls.  Do you know what happened?  The girls started looking for different outfits to put on G.I. Joe and little boys started using Barbie dolls as missiles, throwing them around.  In other words, nature is nature.  Feminism came along and was attempting to basically redefine basic human nature because, for some reason, they don’t like it.

So for the past number of years there have been efforts to strip masculinity and manhood out of the young male population, and they failed.  They’ve obviously failed.  If the men’s soccer team at Harvard has come up with a secret numbering system to rate the female soccer team recruits on a scale of, what, 1 to 10.  Stop and look at the way Harvard’s dealing with it.  Cancelling the soccer season.  This is considered to be such a great cultural and societal offense.

If you listen to Hillary on the trail, one of the things, one of her mantras is when she talks about Trump (imitating Hillary), “Donald Trump, I’m getting sick and tired of Donald Trump basing women on their appearance. I’m sick and tired of Donald Trump rating women on their appearance.” Now, I watch this and I ask myself, who’s odd?  Hillary, do you really think that stopped happening some time ago?  Do you think men stopped rating women based on the way they look?

But you know what I’m talking about.  People hook up, they get together, everybody eventually does.  There are exceptions, of course, not everybody, nothing ever is a total of 100 percent.  But the abnormal, the unnatural way of looking at this is this Hillary Clinton’s way.  Most men look at women and see them on a scale.  You can’t help it.  It’s in the genes.  It’s built in.  We are designed this way.  It’s rooted in this mysterious thing called life which does everything it can to perpetuate itself.

Life is an amazing thing.  It will do whatever it can to perpetuate itself, to avoid going extinct.  And it’s built into virtually every living thing, and it’s something that you scientifically cannot capture or quantify.  And therefore a lot of people reject it because you can’t scientifically quantify it, qualitative it or get a consensus on it.  So every time I hear Hillary Clinton say it, so what’s wrong with that?  Everybody else does, too.  And women do it.  Women judge men the same way.  Maybe not a number scale, but they’ve got their own ways of doing it.  It’s just as natural as it can be.  (imitating Hillary) “I’m sick and tired of Donald Trump who judges women based on how they look.”

I’ll tell you what, Donald Trump’s hired more women in positions of authority and power and paid them a lot more than Hillary Clinton ever has or ever will.  You can make book on it.  Donald Trump has hired more women than Hillary ever will, and he pays them more than she ever will.  And they are of different types and appearance and looks.  They run the spectrum.  One of my main gripes about liberalism is that it is essentially, given everything else it is, it’s an assault on basic human nature that they’re trying to erase and wipe out.  And this trying to erase masculinity and trying to take manhood out of little boys, this is classic what they’re doing at Harvard here. 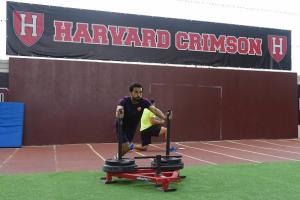 But on the bright side, you can look at it and say, they’ve tried to strip masculinity and traditional manly characteristics out of young boys, and it’s obvious at Harvard they have failed big time.

Well, you know that happens.  You know it happens, just like it does with men and women.  What would Harvard do if they found out that gay men were rating other newly arrived gay men on the attractiveness scale? “Well, nothing, Mr. Limbaugh, because that has nothing to do with masculinity.” Don’t give me that! Do not.  I don’t want to go there.  Don’t tell me… Because it does.  Hey, it’s just a think-piece question.  I’m just asking it.  I like to ask questions to blow up people’s logic.