Rush Revere and the Presidency Is Available for Pre-Order Right Now!


RUSH: Okay, folks, the election’s in five days.  We obviously have all been thinking a lot about the presidency and what it means to us and how much we invest in it, how important it is to us individually, personally, how important it is to our country and how unique an office it is around the world.  And we are certainly in one of the most important presidential elections in our history.

Living through this modern-day election — and I’ve lived through a lot of them — and each one of them, every one of them seemed as crucially important as the previous one, if not more so.  We invest so much passion, effort, desire, in presidential elections, those of us who care and are involved in this.  It has a profound meaning.  And living through it, particularly living through this election, inspired me to go back and really examine the whole office of the presidency.

You know, the Hillsdale College people have this online course recently about the presidency, the Supreme Court, but they even devoted some time to the constitutional aspects of the presidency. And I was inspired to go back and really look at how our first presidential elections came to be and why.  Because if you look at the traditions, the institutions of this country and how they’ve survived over 250 years, it’s momentous, and it’s awe inspiring.

In a nutshell, after the long, hard fight for independence from the British, our Founding Fathers and patriots never wanted to live under tyrant rule again.  They never wanted to be under the thumb of a king.  The days that we’re just supposed to take our beatings were over.  They fought for the freedoms described in the Constitution, the Bill of Rights, the Declaration of Independence. They worked to ensure that our liberty and freedom would always be protected.

George Washington was inaugurated as the first president of the United States in 1789 to be the leader of the American people.  The role of president was created to serve the people instead of the people serving him.  There was no king, although the morality of George Washington is what gave us our modern-day presidency, because even after the hard fought battle for independence, human nature is what it is, and some devout believers in Washington wanted him to be king.  They believed in him so much and his morality that they had no problem if he was king, but he resisted.  He resisted the opportunity to be king.  He did not want it, not after what he had fought for.

It was the first time in history, folks, that anything like this had ever happened.  It reminds me how important the presidency is and how many have sacrificed for our right to actually vote and participate in the selection of the person who will be president.  The people who fought and gave their lives and sacred fortunes to create this system we all know now very well and how vital it is that we continue to pass these traditions on to the next generation.

So we were inspired at Rush Revere to do the next Rush Revere book on the presidency, and I am ecstatically excited to announce today, right now, the latest book in the Adventures of Rush Revere series, Rush Revere and the Presidency.  It’s available for pre-order right now, today.

Now, in this adventure, Liberty, the time-traveling, talking horse and the crew of students travel back in time to meet the first presidents and first ladies.  We focus on the women, the wives of the first presidents of this country. We give a lot of attention to them and the roles they played.

The time travelers experience the election process firsthand during the days of the first presidency.  Through the magic of time travel, they speak with, they get to know George Washington, John Adams, Abigail Adams, Thomas Jefferson, the other incredible patriots and Founding Fathers.

In this book, one of the students, Cam, is interested is becoming student body president of his middle school. So how perfect is it that we can time travel back and he can get advice from George Washington on how to run for president, how to do it, what’s important. 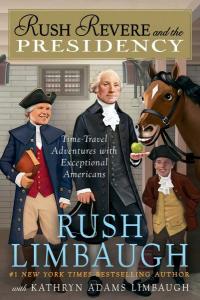 Folks, it’s one of the most amazing teaching elements and methods that we have come up with yet in order to make this book for young people relevant to today and to try our best to get them to understand that traditions and institutions from our founding that still matter as much, if not more so, than today.

Now, these books, they are a true labor of love.  We hear from hundreds of thousands of young readers and teachers and parents and grandparents all across the country who have a new real love and understanding of America, American history, and our founding, and they now love reading about it.  It’s simply incredible.  There are pictures, and you can see them at RushRevere.com.

They send us these pictures, they dress up as Founding Fathers, or colonial citizens, colonial-era citizens, young people dressed up as George Washington or Betsy Ross, the book reports, the photos of the class projects that are pouring in are heartwarming.  They give us real hope for a bright future, and it’s hundreds of thousands that we get as a result of these books.

Folks, it’s magic to be able to connect with young readers this way and on these subjects, subjects that normally to them are boring and not exciting.  But they are taken to these events, and they participate in these events as they read these books, and therefore these events in American history so important come to life and the reader is actually a part of them.

We want every young American to learn the story of our incredible founding, what makes this country such a miracle and why it is so important to preserve it as founded. The efforts to undermine the greatness of this country are constant and they have been around since the country was founded. It’s an ongoing effort to preserve liberty, to preserve the Constitution, to preserve the presidency, all of these institutions as defined, the court, the three branches of government, the separation of powers. All of this is crucial for young people, and actually everybody, to understand, and that has been our project and task.

And the timing, well, we intended it this way, but I’m telling you it still sends chills up and down my spine and goose bumps, with everything going on.  Just the opportunity to have the truth of this country’s greatness and its history explained and taught in engaging ways.  Tremendous opportunity, Rush Revere and the Presidency.