With Podesta’s Pal Inside the Email Investigation, Are We Being Set Up?

CALLER:  Hi, Rush.  Rush, it’s an honor to get to speak with you.  I’ve been listening to you for years, and you have provided a great part of my education about politics and the way the world really is.

RUSH:  Thank you.  I appreciate that, Bruce.

CALLER:  I want to ask you, regarding these nice things that Obama and company are saying about Comey. That he is, you know, a person of integrity and he’s doing this and that, you know, and it looks as if they’re throwing Hillary over the side.

RUSH:  If I’m not mistaken, I think Peter Kadzik is slated to handle the foundation investigation, the Clinton Foundation investigation.  But you’re right that this guy’s a friend of Podesta’s, they went to school together, he’s in the DOJ.  Let’s cut to the chase on what this could be, because, you’re right, a lot of people emailed me last night: “Rush, can it be they’re get ready to throw Hillary overboard?  Here’s Obama backing up Comey,” and all these other things that I’ve shared with you earlier during the day.  To gauge this, you have to also include the LA Times story last night that somebody in the FBI said they could have preliminary results this week, 650,000 emails could have preliminary results.

So let’s say exactly as I hypothetically asked yesterday happens.  Let’s say that tomorrow or Thursday the FBI says, “Our preliminary investigation says nothing new here.”  Well, Obama is set up. He’s already claimed Comey is filled with integrity. Comey is entirely trustworthy.  So if they say nothing new to see here before the election, Obama’s backed it up, hey, we trust this guy implicitly.

It could also be the other, that they know that there’s really bad stuff here.  It involves Weiner and that Huma has lied and all kinds of stuff, and it could well be that Obama does not want to be tied to this as it goes down for his own legacy.  We just don’t know.  There’s no way of knowing what all this means right now because these people play games with us all the time.

RUSH: AP story:  “Justice Department Vows to Quickly Review Emails Related to Clinton.”  This is a story the LA Times hyped last night, and they indicated that there might be a preliminary review announced this week.  Now, you put that in context with Obama praising Comey and the New York Times saying there’s nothing to see here with Trump and Russia.  You could look at this one of two ways, that either Obama and powerful entities in the Democrat Party know that they’ve got the goods on Hillary.

Look, what are the odds here that there’s nothing?  They’ve got 650,000 emails, there are 33,000 emails that Hillary supposedly deleted that others say, no, no, no, they’re there, we can get ’em.  WikiLeaks alluding to the fact that they have them.  Huma Abedin’s not acting like somebody who is unconcerned.  I mean, if they grab your computer that you’ve been sharing with your husband and there’s nothing on there, if you’ve been truthful with the FBI all along, your reaction is, “I don’t care, there’s nothing to see there.  I gave the FBI everything I had. I told them everything I knew, and there’s nothing to see.”

But if the FBI — let’s go the other way.  If they’ve got this preliminary announcement or an announcement of a preliminary assessment of the emails and if it is, “Sorry.  We haven’t found anything yet.”  Then Obama, “See, I knew Comey’s a man of integrity, I knew.”  And they’ve totally, therefore, endorsed, if the FBI says tomorrow or Thursday, “Preliminarily, nothing to see here.”

How would you feel if that happened?  I mean, that’d make you feel pretty depressed, right?  And that’s what these people specialize in doing.  Just keep a sharp eye.  Okay, so there’s that.

John Podesta’s best friend at the Department of Justice will be in charge of the Justice Department’s probe into Huma Abedin emails.  Now, this is the guy by the name of Peter Kadzik.  He is the assistant attorney general, lifelong friend of Podesta’s.  They went to law school together.  Kadzik defended Podesta during the Lewinsky days.  Kadzik also lobbied Podesta to get Marc Rich his pardon.

This group of establishment types, the elites, it’s an incestuous group, it’s a small group, everybody knows everybody. They go from media to Congress to legislative aide back to media, to think tank, to lobbyist.  They change jobs and they change roles but their objectives are all the same.

The FBI will then turn over whatever they find, not this week but whenever this investigation actually ends, they’ll turn it over to the Department of Justice, at which point this guy, Podesta’s friend, will get it.  Podesta’s best friend will be in charge of the Department of Justice probe into Huma.  That’s months from now.  It doesn’t have anything to do with what Comey announced.

The Comey announcement and its impact will or will not be felt between now and Election Day or has already begun to be felt and factored. But the FBI will eventually turn over whatever they’ve learned to the DOJ, and they decide whether to prosecute or not.  They decide whether to impanel a grand jury or not.  That’s the area where the DOJ guy would get involved.  He’s not — I suppose he could be involved now and could be telling Comey — (interruption) Recuse himself?  Are you kidding?  The establishment doesn’t recuse itself.  Republican members of the establishment would, but, no, no, this guy’s not gonna recuse him.

Recuse himself?  No way.  There’s no way he’s gonna recuse just because he’s Podesta’s buddy and called Podesta and asked him to get a job for his kid in the Hillary campaign.  There’s no way he’s gonna recuse himself.  That would be a tantamount admission, “Hey, you know, I’m glad you guys have let me in the establishment, the club, but I’m not gonna do anything for you.”  That’s the end of him. 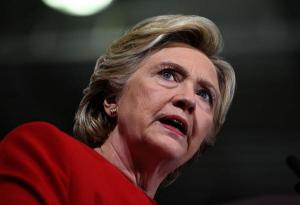 That’s why it’s so corrupt.  And this is… Whether people know it specifically or not, the people of this country have gotten a sense that this is not how the country is run, that it’s not fair, that there’s not a level playing field, that certain people get certain advantage that others don’t in the justice system. You know, equality from the law is one thing and equality of opportunity is another.  But the deck is stacked.  That’s why these people exist, is to Stack the deck in their favor, to stack the deck in favor of their kids.

Like Chelsea Clinton: $600,000-a-year job at NBC and has never done a single thing in that business.  That’s exactly how membership in the club works!  Bill Clinton and Hillary Clinton have not paid… I saw a story. They have not paid serious money for any private jet travel in the last 10 years.  They are constantly flying on other people’s jets. Donors to their foundation, people who are paying them to show up to do speeches, people attending Clinton Global Initiatives, the Clinton Foundation will call, “Thank you so much for the use of your plane, King Abdul,” and so King Abdul donates.

Bill Clinton flew from — What was it? — I think Qatar, somewhere in the Middle East to Ethiopia in the king of the country’s Boeing 747. Another potentate flew him on a 3,700-mile trip on a Boeing 767.  The Clintons don’t pay for any of this, and they have the gall to demand it of people already donating to their charity or to the Clinton Global Initiative or what have you.  Anyway, a caller referred this Peter Kadzik guy and wondered if this investigation — if whatever Comey’s doing, the FBI, whatever they gather on Huma’s and Weiner’s laptop — if Kadzik will then…

Don’t think Loretta Lynch won’t have a role, either, in determining how far the investigation goes, whether it goes anywhere or not.  In another story, U.K. Daily Mail: “Hillary Clinton Staffers Knew FIVE YEARS AGO That [Anthony] Weiner Was Talking to Underage Girl,” that he was sexting, “But Did Nothing About It — Hillary Clinton’s staffers knew as early as 2011 that Anthony Weiner had been messaging an underage girl, but they did nothing about it, according to WikiLeaks emails published Monday.

“John Podesta – now chair of Clinton’s presidential campaign — and Neera Tanden, another adviser, were forwarded news of an investigation into Weiner’s online contact with a 17-year-old Delaware high school student by Jennifer Palmieri, the current campaign communications director, in June 2011,” and they did nothing about it.  Huma’s boyfriend… I don’t know how long they been married. Huma’s boyfriend or husband, whatever, was sexting with a 17-year-old, the Hillary campaign knew it at the time he was married to Huma, “who is now at the center of fresh FBI investigation,” buh, buh, buh, buh.

“The email detailed lurid claims of private messages to an underage girl being investigated by police — and was met with the response ‘oof’ by Podesta,” meaning they didn’t do anything about it.  A piece by A.B. Stoddard, formerly of TheHill.com, now at Real Clear Politics: “Clinton Owns It All,” meaning all of this is her fault. Don’t try to blame it on Comey or anybody else.