RUSH: Here is Robert in Southampton in New York.  Great to have you, sir.  Glad you waited.  I appreciate your patience.

CALLER: (muffled cell throughout) Hello.  Thanks for taking my call again.  I appreciate it.

CALLER:  My question is having to do with Kasich.  Kasich just wrote in John McCain’s name —

I mean, is this a good indicator of why nothing of any consequence has been conserved over the last 50 years? Not our borders, not our demographics, not marriage, not even women’s bathrooms! I mean, they can’t even hold… They can’t even hold the line on that. (chuckle) It’s just… I mean, is there any…? Is there any hope for these people?  I mean, I don’t think so, but, I mean, when they do things like this… I mean, if it isn’t controlled opposition, Rush, then why are there no corresponding figures like Paul Ryan or Kasich or —

RUSH:  Wait a second.  Are you saying “hold the position” or “controlled opposition”?  What are you saying?

CALLER:  I’m saying that much of the conservative movement isn’t meant to actually win because here we are at the bottom of the ninth with two strikes and we have people like Ryan, Egg McMuffin and now —

RUSH:  No, it’s my hearing. If you’re saying conservatism “holds its position,” you’re right about something there, which I wanted to expand on.  If you’re saying, “controlled opposition,” I don’t know what that means, so that’s why I was trying to clarify.  Look, I’m gonna answer this after the break.  I think I know what you’re asking me.

RUSH: Now, as to the previous caller from Southampton’s question about Kasich admitting that he voted for McCain, folks, this isn’t complicated.  He had a phrase called “controlled opposition.”  I had not heard the phrase, and rather than assume I know what it meant I looked it up, to the extent that I could.  The theory behind “controlled opposition” is this: That Republican elected elites work with the Democrats by controlling just how much actual opposition to the Democrats there is.

And in this way, by maintaining controlled opposition, Republicans are able to stay in close association with Democrats.  Controlled opposition is a way of limiting how strident and successful conservatives are in opposing Democrats.  Here’s the bottom line.  It’s no more complicated than this.  John Kasich does not think that it’s important to defeat Hillary Clinton.  Who cares why! All you need to know is that.  If John Kasich, the governor of Ohio, who has… Since he’s the governor, he has the mechanisms to get ground game activity going to facilitate the Republican nominee.

Now, I happen to get the sense — I’m pretty confident that I know this — that the vast majority of you firmly believe that the country’s on the wrong path and has been for a long time largely because of Democrats and establishment types, and you want them stopped.  You don’t want Hillary elected because you don’t want a continuation of the last eight years.  You want the Democrats out of power.  You think the Democrats’ priorities are not the best to maintain this country as founded, so you don’t want Hillary elected.

You don’t like the leadership of the country as it’s currently constituted.

You think there needs to be a change in leadership.

John Kasich obviously doesn’t.  John McCain’s not gonna win anything, so he writes McCain’s name in.  McCain’s not gonna win, so it’s not really a vote for McCain.  John Kasich doesn’t want to do anything that might actually lead to Hillary Clinton losing.  That’s what he’s saying.  How else can you analyze this?  Help me out.  Am I missing something?  I mean, you can say, “He’s making a statement of principle, Mr. Limbaugh.  He is diametrically opposed to Mr. Trump because Trump doesn’t deserve to be in the Oval Office! He’s reprobate. Trump’s this; Trump’s that.” 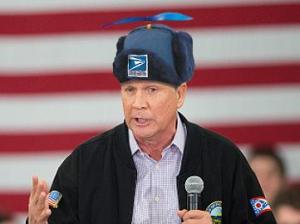 But in the specific case of Kasich, folks, it isn’t complicated.  It’s obvious that John Kasich is not interested in Hillary Clinton losing.  Will people forget it?  No, Republicans won’t forget it.  But what Kasich and others will rely on is all politics are local, you know, depending on what Kasich — can he run for reelection or is he term limited governor?  I don’t have any idea.  Anyway, I’m not even thinking about what people forget.