RUSH: Let’s go back to last Friday, because I need to do a little housekeeping here.  This is an object lesson.  On this program, we were here when the news broke that the FBI had reopened the investigation into Hillary Clinton and her emails.  At the time, news was scarce.  It was just beginning to be reported.  And we were, like everybody else, trying to put everything together with every little morsel that we learned.

And it caught everybody off guard.  Everybody was taken aback because we were of the impression that the investigation had been closed and that was there nothing to be found.  We all were under the impression, those of us on our side, that everything that happened in that regard was odd.  FBI directors don’t do what Comey did.  They don’t go out and lay out a case and then publicly announce the recommendation not to prosecute.

Everything that Comey has done in this case usually happens behind the scenes without cameras and microphones present.  I was making that point; then we started wondering, “What does this mean? What do they have? What have they found?” Because Comey had previously behaved in such a way as to make it look like he had been intimidated by Lynch and by Obama to sweep this thing away.  One of the many theories people evolved was, “Well, this is a smoke screen. This is a distraction to take people’s attention away from other things.” 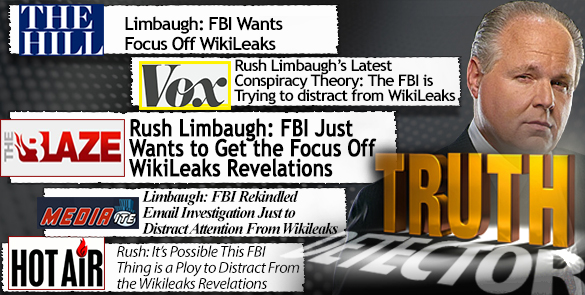 Because it was getting hot and heavy.  WikiLeaks was finally penetrating.  It was getting through to people, and it was about the Clinton Foundation and how the Clintons got filthy rich off of their own charity.  It featured emails from Chelsea Clinton to a guy named Doug Band, and what happened was that Chelsea was complaining about what Band was doing, or what the foundation was doing. It was looking like people were being hustled, and Band took it personally.  He said, “Don’t blame me.  Your dad’s doing all this, too.”

That was in the WikiLeak’d emails.  “Your dad’s doing all this,” and then he laid out the things that Bill Clinton had been doing, or had asked him to do.  One of the examples that Band gave is he called Coca-Cola and asked for a donation of whatever it was, $3.5 million to the Clinton campaign foundation and then suggested that Coca-Cola hire Bill Clinton for another $3 million and change per year as a “consultant.” So they make a donation and they hire Clinton, and then Band was detailing how other donors would be hit up to hire Hillary to give speeches and so forth.

And I shared with people a theory that was offered and given to me by a friend of mine who’s a huge cynic, a know-it-all cynic.  The theory was that there’s nothing here. “Nothing’s gonna happen! There is no further information that’s gonna be produced by the FBI damaging to Hillary.  All this is, is a diversion to distract people’s attention from what is becoming killer data, killer information in the WikiLeaks dump.” I even did my Morning Update today on that very thing. I began the Morning Update by saying, “I do not describe to this but this is a cynic’s view.”

Well, lo and behold, on Friday night my email starts blowing up, and my brother says Twitter is blowing up. They’re saying that people are assigning that cynic view to me, that I actually owned it and announced it as my own on my program on Friday.  And people were cackling and being critical and comparing me to conspiracy kooks and nutcases, that such a theory is insane, it’s absurd. And the fact that it was never my theory — and I stated clearly! If I said it once, it had been a minimum of five minutes that it’s a cynic’s view, not mine.

So the people who reported it as mine had to know and had to do it on purpose.  It would simply be impossible for them not to know.  All they would have to do is go to my website, read one little sentence or passage of me prefacing the theory by assigning it to where it came from: An email from a cynic — a friend of mine who’s an arrogant, know-it-all cynic.  And yet they ran with it.  Well, I don’t know who “they” is.  My email was blowing up.  I guess a lot of people in the networks. Even Fox.  And TV in LA.  We’ve got some sound bites to deal with this just to show you.

I just want to clean all this up because it’s an object lesson.  I didn’t say it, but they think I did, or they want you to think that I did.  We will start with… And there are many examples.  This is just… What is this? It’s KTTV Eyeball News LA, Good Day LA, the cohost Steve Edwards speaking to a Republican strategist John Thomas about me and my supposed take on Comey reopening the investigation into Hillary’s private server, and they had this little conversation.

EDWARDS:  There’s all kinds of conspiracy theories going around us about everything now.  Rush Limbaugh has suggested — and Rush carries a lot of weight among Republicans, has suggested — that Comey did this to draw attention away from the release of WikiLeaks. (snorts)

THOMAS: (scoffs) I don’t buy that!

EDWARDS: That was Rush! 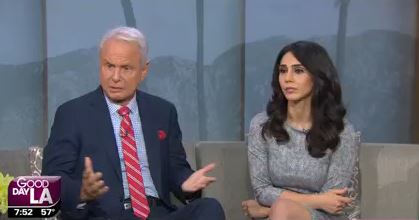 RUSH:  All right.  So that’s just one of many examples.  The next is Fox News, and this was Sunday on Fox News Channel’s Fox & Friends Weekend, and they had Peter Schweizer on, the author of Clinton Cash.  They asked him to react to a sound bite of mine.  Listen to the sound bite that they take out of context and leave out how I set it up.

RUSH ARCHIVE:  Comey is just doing this to take everybody’s attention off of the WikiLeaks email dump. … The WikiLeaks scandal right now is starting to hurt because it’s exposing the fraud and the hustling and the collusion and the corruption that’s going on at the Clinton Foundation.

RUSH:  So that was taken total out of context.  Now, it could well be that the time you get to the producers at Fox & Friends Weekend, they have no idea.  They’re just getting it second, third-hand.  But whoever originally got this wrong got it wrong on purpose.  How many times…? How many times did I attribute this to where it was from, a cynic, not me? Multiple, multiple times.  And yet people ignored that and attributed this to me and assigned it to, “That’s the kind of conspiracy thinking! It’s just a silly, irrelevant kind of theory,” and so forth.  Peter Schweizer even answered the question.  They had him react to the bite that they played, that out-of-context clip. This is number five… 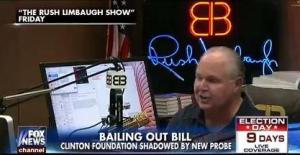 RUSH:  Okay.  So I just wanted you to here Schweizer’s reaction to it just to get his thoughts on it, but I wanted to get the record set as quickly as I could here in the opening of the program, for what good it may do. It’s either that or people just don’t listen.  It could just be people just don’t listen, ’cause I could not have been more clear about it, but it is what it is.  Anyway, that sets the record now.

RUSH:  A question, Mr. Snerdley.  Why do you think so many people find it necessary to distort what I say?  And it’s beginning to happen more and more among so-called right-wing or friendly so-called conservative sites.  Why do you think that’s necessary?  Why is it necessary to distort what I say?  (interruption) Oh, you think that’s what it is?  I don’t want to share his answer, folks.  His answer’s tied to people having grudges.

But my point is, if what I say is so outrageous and so terrible, why not just report what I say?  Why have to distort what I say?  (interruption)  Oh, they can’t report what I say because then they’d have nothing to say themselves.  Well, this is what I meant and what I have meant, folks, when I have said for the last recent number of years that there’s an internecine fight on the right.  We can’t even unify around the concept of defeating Democrats anymore because conservatism is too busy trying to take itself out, essentially, and it makes no sense whatsoever.

Thank God for Leonard Pitts.  Leonard Pitts just honestly happened to portray the exact mind-set of the entire Democrat Party in his column.  That is exactly what they want.  We can’t even unify around the concept of beating them, much less immolating them or grinding them into dust.  We’re too busy trying to extort what various members of our so-called own club have to say.  It’s just mind-boggling.

But again, I don’t know why anybody would find it necessary to distort what I say, if it’s so bad to begin with.  I think they have to distort what I say in order to construct ways in which to disagree with me or to otherwise impugn my honor and integrity.  But this was kind of blatant.  The left didn’t do this.  I mean, this is our so-called buddies on the right purposely taking full out of context what I said on purpose.  It had been on purpose because I prefaced this way too many times for what it was.