It’s not what he said.  That’s what they want people to think he said, but they must be afraid of something.  The next day, this is my point about them, no sense of humor.  Trump goes out and how does he react to the controversy?  There’s a number of ways you can react to this.  After the debate when everybody in the media, I mean, everybody!  Even people you think are friendly are just practically having cows over this.  You can go back to your hotel or get on your airplane and fly away, start wringing your hands, “Oh, my God, oh, geez,” and you maybe think you call a press conference, “Hey, you guys misunderstood.  I didn’t say that.  I didn’t mean that.”  You can do that.

But it’s, as I say, a teachable moment for me because they don’t understand. For example — talk about myself for a minute — when I do this program, there’s a whole heck of a lot of it here where I’m just trying to be funny, outrageously funny, a little over the line funny, push the envelope, that’s where they lose it.  We’re not allowed to push the envelope anymore, not allowed to cross the line of propriety that they define.  There isn’t anything funny. There isn’t anything funny about whatever it is I’m talking about.

So they take things that are intended as humorous comments or a joke and they attach serious political meaning to it and then proceed to get profoundly, deeply outraged and say it’s unacceptable, this is intolerable, this will not stand.  And they’re doing the same thing to Trump, or trying to.  But his supporters all get it.  “But, Mr. Limbaugh, it’s not his supporters that are the problem.  Trump must engage in outreach and try to explain to the people who don’t get what he’s trying to say.”  Well, I understand all that, I understand that thinking.  But that isn’t my point.

My point is that all of this near unanimous, belief in something that genuinely is — you talk about unhinged, to believe Trump said what you think he said when he didn’t say it.  Didn’t even say it.  To go out then and believe he said it or try to convince other people he said it, convince yourself what he really meant, it’s unhinged.  If these people had been around in the 1700s we’d have never had a revolution.  They would have never tolerated the Founding Fathers’ objections to King George.

They would have wanted to put in jail people like James Madison and Patrick Henry because they dared speak out against the establishment.  We’d have never had the revolution if the people in the Democrat Party today had been ruling the roost in the media back then.

RUSH:  Yeah!  Donald Trump’s unacceptable!  We’re not gonna put up with Donald Trump!  Nobody should.  Why’s Trump unacceptable?  That means over half the country’s unacceptable as far as these people are concerned.  It’s a classic example.  We can’t have Trump look what Trump, Trump say he won’t accept the result of the election.  Which is not what he said.  Well, they’re saying they won’t accept him!

It wasn’t that long ago, maybe, I don’t even remember, five, eight years ago that I was approached to join a group of people that wanted to buy the St. Louis Rams.  I was gonna be a minority investor in the project.  And somehow that information leaked out.  Now, I had been approached by people who knew me, and there had been no more public fan of the NFL for 24 years than me, from the environmentalist wacko picks to violating my no guest rule by having football people on on Fridays, especially Super Bowl week, there was no question.

I was such an NFL fan that I had people calling here saying, “Stick to the issues.  We don’t want to hear about this.”  But then somebody leaked to the media that I was in this group that was going to try to buy the Rams.  You know what happened next?  A bunch of reporters started writing stories quoting me, things I’d never said about wishing for the return of slavery and other abominable things.  Things I had never said that were just totally made up that turned out having emanated from Media Matters.

These reporters were heralded as doing great work.  A reporter for the New York Daily News went to a couple of NFL locker rooms armed with these quotes seeking out black players.  “Do you want somebody like this owning a team in the NFL?”  We can’t have somebody who wants to return to slavery in this league, no way.  And it mushroomed and it blew up.  I’m sure those of you who were listening around then remember it. 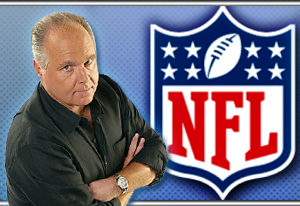 And the same thing’s being done to Trump.  The exact same hysteria.  Something he didn’t say is being reported as something he did say, and, furthermore, something that he really means, to the point they’re trying to convince people that Trump might go so far as to mount a coup if he loses.  It’s hysteria beyond any boundaries of reality.  So I ask myself, “Why?  What’s behind this hysteria?”

If it’s so outrageous what Trump said, laugh it off and make fun of the guy and just ridicule him and so forth.  Why this hand-wringing outrage?  I’m not even sure it’s mock outrage.  I think these people are genuinely blown away.  I think they really do think what they think.  Some of them do.  And to them it is maybe the most offensive thing that Trump has ever said. It’s more offensive than whatever they think he did with these women. It’s more offensive than what he did when they claim he mocked a disabled reporter.

To say he’s gonna wait for the outcome of the election to decide how he wants to approach it.  Why, this may constitute the single greatest assault on freedom as we have known it, if you listen to these people.  And there’s no exception.  Every one of ’em, hundreds, thousands of reporters and media people and professional political people around the country all act and think the same way.  And it just doesn’t make sense, unless there’s something going on that we don’t know.  ‘Cause this is not rational behavior.  It’s not a rational reaction.

And it’s further emphasized by Trump going out the next day and jamming ’em by saying, “Okay.  I’ll accept the results, if I win.”  That’s designed to make ’em explode after they’ve been simmering all night long.  He’s toying with ’em. He’s tweaking ’em.  I know it well.  I do it all the time.  I sometimes even tell you in advance when gonna tweak the media here.  I can do it any time I want.  They fall for it. Even when they know I’m gonna do it, I can make ’em freak out and go get the vapors.

Yet the Democrats constantly engage in the very behavior they accuse Trump of engaging in.  They’re out alleging that this was fraudulent, that was cheated from them, that was taken away from them as though they are somehow the paragons of virtue in all this.  It’s laughable.  I mean, these are the people that stand in the way of every idea to take fraud out of elections.

They oppose every idea, every great idea to remove fraud from elections, they oppose it.  Photo IDs, purging the voter rolls of people who’ve passed away.  It’s the Democrats who stand in the way, “No, no, no, no, no, no, you can’t take dead people off the rolls.”  Why not?  It’s just clutter, they can’t vote.  Well, you can’t do it.  Wonder why.

Photo ID.  It’s racist.  It’s racist to demand a photo ID.  How in the hell is that racist?  “Well, black people know the history of this country and you make them go down to city hall, you make them go down to a big, giant government building and tell ’em they have to pose for a picture, damn right they think they’re gonna be sent back to the next plantation.”  Are you kidding me?  This is what they say.  You can’t do photo ID because bring about horrible memories of generations ago in plantation south.  And we can’t do that.  It’s too traumatic.  We can’t have African-Americans being asked to go to a federal building to pose for a picture.

Now, Democrats are worried about cheating, right?  The Democrats are worried about the election being rigged.  Why?  ‘Cause Trump claims that it’s gonna be rigged.  Trump’s out there saying that if he loses, it’s rigged.  This is funny in itself.  You know what they’re thinking?  Trump knows he’s gonna lose, and so Trump in his own mind can’t lose.  Trump is so sick, Trump has such an out-of-control ego, that Trump is so out of touch with reality, he can’t possibly lose, so that if he does, it’s going to be rigged. And, see, Trump knows he’s gonna lose and so he’s out there giving everybody on his side, all of his supporters, he’s telling them right now it’s rigged, because in his mind he can’t legitimately lose an election.

I’m telling you the reaction to this is akin to a bunch of people that are on the verge of getting caught.

RUSH: Let me run something by you, folks, because for the second day in a row I say this. This hysterical reaction to Trump’s essentially common sense and harmless answer, when you get right down to it, did you hear Trump say that he was going to definitely refuse to accept the outcome?  No.  Had he done that, the story the next day would have been “Trump concedes election at final debate.”

Okay, so why the hysteria?  They know he didn’t say what they want you to think he said.  Why they hysteria?  There has to be a reason for this hysteria, folks.  This is not normal.  This massive identical reaction from hundreds of people is hysterical.  Why?  Could it be — just posing a possibility — could it be that what they actually heard Trump say was this:  “You know you’re cheating, and I know you’re cheating, and I’m not gonna act like your average Republican loser and let you get away with it.”  Could that have been what they heard?

When Trump said “Stand by.  Let’s wait and see,” could they have heard Trump actually saying, “Look, you guys, I know you’re cheating and you know you’re cheating,” or “I know you’ve cheated and you know you’ve cheated, and I’m not your average Republican loser that isn’t gonna challenge you on it”?  Maybe they heard something like that.  Something has to explain this fear, this hysteria.