Fox Reacts to Me on Trump


RUSH: Audio sound bite time.  We’re gonna start here at the top.  My reaction yesterday to Trump’s statement on Monday night that he was gonna withhold any action until the election results are actually in, this is where this unanimous, hysterical reaction all over Washington, New York, hell, all over the country, “Trump said he’s not gonna accept the results the election! Trump’s gonna pee on 200 years of American tradition.”  Remember the reaction to it.

RUSH ARCHIVE: There isn’t anybody who really thinks Donald Trump doesn’t respect the traditions of America or American elections.  There isn’t a soul out there.  This is people trying to convince low-information voters and others who aren’t paying attention that Donald Trump is some alien from outer space who wants to blow up the greatest traditions of American elections and politics and so forth.

RUSH:  Pretty self-explanatory.  It’s pretty much what I said.  I mean it is exactly what I said.  I said more.  I extrapolated and added to it. I basically said, “Look, this hysteria here is a little bit over the top.  They all know what Trump said.”  I’ve now revised my thinking.  I think they heard Trump say something else.  It has to be something along those lines to explain it.  Let me just repeat this.  What if what they heard Trump say — you all heard it — he said, “Check with me later.”

“Mr. Trump, will you accept the outcome of the election?”

“Check with me later.”  Panic ensues.  What if what they actually heard was Trump saying, “Look, you know you’re cheating and I know you’re cheating, and I’m not gonna be your average Republican patsy and just lay down if it happens.”  Something has to explain it.  Anyway, here is Krauthammer’s reaction after Bret Baier played that clip.

KRAUTHAMMER:  Leading up to this, for days he’s been telling rallies, this election is precooked, it’s rigged, it’s unfair and it’s about to be stolen from us. Now, when you say that and you couple it with, “I won’t know what I’ll do, I’ll figure it out at the time,” then you have a threat to the tradition. The idea of a national election stolen, which would require an enormous conspiracy, which, of course, Trump is also invoking, a global conspiracy involving the banks, the Democrats and who knows who else to rig an American election. It’s not plausible. He has not presented any facts. And he’s shaking a fundamental principal of our democracy, which is the peaceful transition which requires the open recognition of the legitimacy of an election by the loser. And that is something that he obviously threatened. 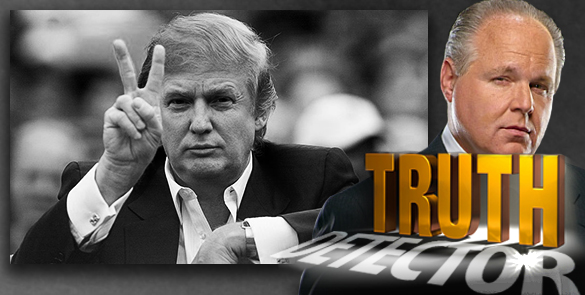 RUSH:  Oh, they think he did.  They obviously think he did.  They obviously think he threatened to not accept the fact that he lost, if he does.  I know for a fact — well, I don’t know for a fact.  I’m fairly almost ontological certitude certain that if Trump had answered that question the way they want the whole story that night and the next day would be: “Trump essentially conceded the election last night, Megyn. We all heard it last night right here on the Fox News Channel expertly moderated by our own Chris Wallace.  You heard when Trump answered the question, he pretty much admitted he didn’t have any prayer here.  If he’s already conceding the election, what must he really know in terms of how bad it’s gonna be?”

You know they would have run with the story that way.  Besides, he didn’t say it.  Anyway, so now we go to a different sector of Fox, Fox & Friends this morning talked about basically the same thing.  Set it up.  Here’s the cohost, Pete Hegseth, introducing and playing the clip.

RUSH ARCHIVE:  Anybody in their right mind knows that Donald Trump was not promising a civil war, he was not promising to blow up the country, he was not promising to not accept the results if he lost, and these people know it, folks.  The people stirring this up know full well.  Why should he concede that?  Why should he foreclose that?  Why should anybody running against the Democrats foreclose that given what has already happened in this cycle?  Given what we’ve learned from the Project Veritas videos of James O’Keefe?  Given what we’ve learned from the WikiLeaks email dumps consisting of things from John Podesta.  Smart thing to do.

RUSH:  And here is the response from the Fox & Friends crew.  We have Steve Doocy, Hegseth again, Ainsley Earhardt.

DOOCY:  He is such a pro.  He talked right up to the commercial.

HEGSETH:  It reminded me of that first Fox debate where he raised his hand, it was just honest, “I don’t know if I’ll –” are you gonna contest election?  Maybe, if it’s rigged or if there’s things that are wrong, who knows.

EARHARDT:  Yeah.  I mean, you can’t hold it against him if he’s being honest.

Well, all right, anyway, then it’s clear that certain members of the establishment for some reason feel really threatened here.  And, by the way, you heard Dr. Krauthammer say it would require a massive conspiracy to do this, and it would involve too many people.  It just couldn’t be done, and he doesn’t have any evidence of it.  Well, Mrs. Clinton apparently does, because the Democrats are running around, they’ve got this story from Reuters today.  They’re running around making it look like that we should look for leaked documents in the future, that the Russians have hacked or rigged the election.  They’re already setting up the premise.

This is not just Trump talking about it.  But I think they’re misunderstanding the way Trump’s keeping his people fired up, the way Trump is trying to keep his base together, he knows who they are.