RUSH:  By the way, folks, did you hear last night Hillary Clinton announced to the world that it takes America four minutes to spin up and launch nuclear weapons?  Have you ever heard any president admit this, much less a potential president, a former secretary of state, have you ever heard anybody tell our nuclear enemies how long it takes us to spin up a nuclear launch?  Four minutes.  You want to talk about qualified, irresponsible?

RUSH: So there’s McCain.  I just saw a statement from McCain.  You know, this degree of purposeful dishonesty is getting really, really tough to stomach, and we’ve been putting up with this for 30 years, folks.  There isn’t a person in the media or in the Republican Party — if they’re telling you otherwise, they’re not being honest with you — there isn’t a person in the world that thinks Donald Trump last night said that he will not concede if he loses.  There’s not a single person who thinks that’s what he said. 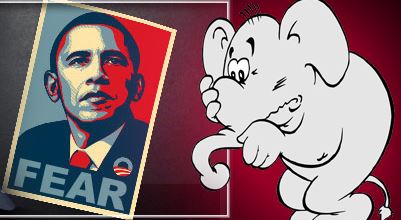 With so much evidence of widespread cheating on the part of the Democrats that has already impacted Trump, he would be a fool, just like the Republicans were fools to take impeachment off the table, and for Mitch McConnell to promise Obama, you know what, we’re not even gonna oppose you in calendar year 2016 ’cause we don’t want to goof it up for our nominee.  I guess they thought it was gonna be Jeb and so they thought they were doing great things by not opposing Obama, that the American people gonna really appreciate the Republicans, yes, look, they’re not even gonna do politics. They’re not even gonna oppose Obama, I guess we should elect Jeb.  That’s the thinking.

Now, if you’re Obama, you’re sitting there, my God, I can’t believe what idiots these people are.  They’re telling me that I’ve got green lights and blue skies and an unobstructed view of the future, and they’re not gonna stop me?  What am I gonna do?  And he’s doing it.  Okay, I got sound bites. Look, I could spend the rest of the hour venting on this ’cause I still, folks, even with all I’ve said I haven’t yet gotten to the meat of the bone on this, I am so livid about this.  But my better instincts are telling me to rein it in at this point because I’m very, very close to being near the boundaries of profanity.  And I refuse to go there.  It’s a family show.  I’m just tired.  All of this is an insult to all of our combined intelligence.

How I Found the Newest Song I’m Obsessing On

RUSH: Did you get this in the bumper rotation?  You know I wish you’d a told me that you did because we need to upcut this at about 3:25, 3:15.  This is my new favorite song of all time right now, folks.  I’ve been grooving to it in every free moment that I have.  It’s called Can’t Do Without You, and that’s the whole lyric line.

Whoever wrote this song was really missing the babe, because that’s it, for six minutes, “Can’t do without you,” by a group called Caribou.  But it takes two minutes to get into the actual tune here, which we don’t have, so if you want to produce a bumper here, go at about 3:10 — well, here’s a flavor — no, take it out. Start at 3:10 and then give me the next two minutes of it and then you’ll get to the meat of it, at least my favorite part.

RUSH:  How did I what?  Oh.  Snerdley wants to know, since I can’t hear new music, how did I discover this new song that I’m obsessing on? I was watching one of my formerly enjoyed TV shows, How to Get Away with Murder.  Have you ever seen that?  And it was last week’s episode or the week before, I forget which, but two lesbians are sitting in a bar, that was the scene, they’re getting all touchy-feely and this techno music started, and the captioning had the lyrics, and the lyrics said, “Can’t Do Without You.”

I said, “I never heard of this,” so I Shazamed it, what the hell was this. There was dialogue, they were talking, I could just hear the base rhythm, which is what hooked me.  So I Shazamed it, and Shazam told me it was “I Can’t Do Without With You” by Caribou.  So I went and looked, and there’s two versions. There’s a single and an extended mix, which is six minutes.  The extended mix is the one. I said, “If we’re gonna make a bump out of this, you need my guidance on this. We can’t escape the vocals, but they’re not obtrusive.”  It would be just like when I was watching the scene on the TV show.  They kept talking. You couldn’t hear the vocals.  It won’t matter.  It’s actually cool.