RUSH: Before we get going with the primary substance of the program today, there’s something that just happened about two hours ago that, for some of you, is going to be extremely — well, actually for a lot of people this is gonna be very relevant.  On Monday, Barack Hussein O will sign executive orders lifting the embargo on Cuban cigars, rum, and other things.  Now, but wait.  It’s actually not lifting the embargo full-fledged.  You will not be able to, while in this country, go online and order Cuban cigars or rum and have it shipped.

As you know, there are brand names, Cuban cigars, there things like Cohiba and Partagas, Punch, La Gloria Cubana, there’s all kinds of them, but practically all of them are also marketed in the United States and they are owned by cigar manufacturers that are not Cuban obviously. They’re owned by domestic cigar manufactures, some down in Dominican Republic, some in Nicaragua, and they use tobacco from all over the place.

What the domestic manufacturers had been long intending to do if the embargo was ever lifted, full-fledged embargo, they were gonna go — they’ve already done this, by the way — to the Treasury department, the Commerce Department, and make first dibs on raw Cuban tobacco.  They were going to claim that it would be unfair trade to allow Cuban cigars to be sold retail in the United States on the basis that they, the domestic manufacturers, had actually established those brands and trademarks for the U.S. market.

Cohiba, Partagas, Punch, La Gloria Cubana, whatever it is, they were going to say Cuban cigars should remain illegal because they are trademark violations. They were gonna claim that they wanted dibs on the raw Cuban tobacco to do with as they please, blend it into their existing cigars or roll new ones.  That’s now out the window, and they’re gonna be fit to be tied.  This is not congressional action.  This is another Obama executive order, and it is designed to promote trade between the United States and Cuba. 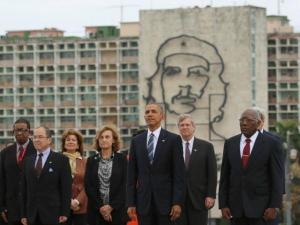 But it’s largely because the domestic manufacturers that have built up these brands in the U.S. market, want those brands to not be violated by competing Cuban brands.  Even though the Cubans may have invented the brand first, the brands haven’t been available in this country since 1959, 1960, ’61, whenever the embargo went into place.  It’s not gonna make the domestic cigar makers happy, but at least it does not allow the import of Cuban cigars retail.  So it’s still a big day.

I mean, for people who smoke cigars and want Cuban cigars, it’s now legal. You’re gonna be able to get as many as you want and bring them in.  You just gotta go to Canada, gotta go to Mexico, the U.K.  I mean, Cuban cigars are everywhere but here.  You can buy them in France, anywhere.  South Pacific.  They made certain blends for certain countries, certain brands in certain countries. It doesn’t matter now. But you’re still not gonna be able to buy them while you’re in this country. Not legally, anyway.