Democrats Want to Manage Your Misery

CALLER:  Thank you very much.  I’m a devoted listener since 1990, and I agree (chuckles): He needs to stay away from that bait.  I believe the effective way for Donald Trump to counter all the effort to discredit him with women is for him to focus on safety, you know, to give them a compelling reason to vote for him.  Crime and terrorism in this country is out of hand, and there’s no doubt that this world’s a much more dangerous place that it was eight years ago.

I mean, Trump has plans to address crime in this country, and I don’t think it’s a priority at all for Hillary.  I mean, some of the statistics that I’ve heard I think from you and others just amaze me. You know, like 30% of our prison inmates are illegal aliens.  When we see the police being assassinated in our streets and riots in our cities and, you know, murder rates going up to record highs, higher than they’ve been in such a long time —

RUSH: They won’t talk about it. Her constituents probably commit most of the crimes taking place. Not all, but a good percentage of them, but she can’t talk about crime as a problem because her party’s been running the show for eight years.  That’s why it’s wide open.  I agree with you. It’s wide open for Trump.  If security and policing is a way to go out and convince women that they can support him, then go for it.

CALLER:  And the same thing with domestic terrorism.  I mean, it’s now just becoming a frequent occurrence.  It didn’t happen eight years ago.  I mean, we have people shot in our malls, stabbed, slashed. And when you go and look at these domestic terrorists events in Boston, Orlando, San Bernardino, or New York —

RUSH:  That’s workplace violence.  That’s not terrorism.  That’s another thing.  They won’t even call it terrorism.

CALLER:  Right. Right. But the thing that they all have in common is that all of these perpetrators were known to the authorities ahead of time.

CALLER:  And that’s just incredible to me.

RUSH:  And they all vote Democrat.

CALLER:  Well, the Democrats aren’t gonna do anything about it.

“How dare you say someone benefits!”

But that’s the point; they do!  You can see them trying to benefit from it!  When Gabby Giffords got shot, what did they try to do?  They tried to benefit by blaming on Sarah Palin and the Tea Party!  When the guy in Colorado shot up the movie theater, Brian Ross at ABC claimed the guy was a member of the Colorado Tea Party.  He wasn’t! They try to benefit from all of this, politically!  I’ve got a story in the Stack where a number of environmentalist wackos are openly expressing disappointment that Hurricane Matthew was not more destructive.

Because had it been more destructive, they would have had an easier time blaming it on climate change.  I don’t know.  It just seems to me that all of these things that people acknowledge are out of whack…  I mean, the job situation is not right. The economy isn’t right. Our cultural dissent isn’t right.  I mean, people instinctively know it. There isn’t any unbridled joy in the country. There’s no sense of the American spirit triumphing anywhere.  There isn’t a sense that we’re on the right track.

You find optimism in small pockets of people and places.  It’s not something that’s national. Versus when we are in robust economic times, you know it. You’re living it. You experience it because it’s all around you.  And, by the same token, when things are not going well, you see that, too, because you live that.  You see it in your own home or in the home of friends and relatives or even in town people that you don’t know. But you just know it, and that’s where we are.

We could be doing so much better.  We ought to be doing so much better.  I cringe, I literally cringe when I hear Millennials tell me that they think it’s just an accident of birth that they happened to come of age as adults at that moment in history when the US has begun its inevitable decline.  They just think it’s the luck of the draw.  Their mom and dad didn’t meet at the right time and so they were born too late.  And now they face a lifetime of misery and student debt and whatever it is.

I mean, the single the greatest destruction that the left has meted out is the student loan program.  This is a big bugaboo of mine.  The college education since the Great Depression has been the ticket out, the ticket up.  Every parent has believed it.  Every parent has had the dream of their kids going to college and becoming something by virtue of a degree, maybe even go to graduate school, become a lawyer, a doctor, a scientist, that has been the dream.  And it always was.  I mean, it was a ticket out.  The greater your education and the better you did at it, the greater your odds for financial success and independence were. 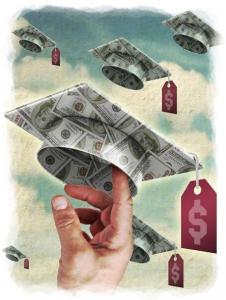 The left has said to every American, “Let us do these things for you.  We know you’re not qualified.  We know you’re not competent,” and they make a mess of everything they tell you they’re gonna improve.  And I think the greatest illustration of how they have bastardized one of the great American institutions is the college education, because it has now become an albatross around the neck of most graduates.

Not only that, look at what people are majoring in: East Ovarian Studies in ancient Africa pre- the Roman empire.  Where are you gonna go to implement the knowledge you have acquired in that field?  Yeah, you start teaching other arcane, irrelevant things, like ocelot studies in the era of feminism circa pre-Roman Empire, whatever.  It’s asinine.