RUSH: A.B. Stoddard is on Fox right now warning people, do not believe the polls yet; they may not be as predictive as they look.  And it is exactly as I said last hour.

Folks, I implore you to do your best here not to get dragged down to the depths of depression and defeat and fatalism.  Do not do it yet.  Now, I don’t know what A.B. Stoddard said.  I just saw the graphic underneath her while she was speaking, and the graphic said she was warning people that the polls may not be as predictive as they look. Which is a way of saying that this race may not be nearly as one-sided for Hillary as it looks right now.

Don’t forget, there is an undeniable truth in politics, and it is this:  Polling data is used to shape public opinion.  Polling data… Whether it’s presidential races or anything else, if it’s a poll, it is being used to make news.  Polling has become the mechanism by which the media can write their own stories, can set their own agenda, and make it look like they’ve got nothing to do with it.  The polls have these reputations of independent, nonpartisan, bipartisan, uninterested in the outcome.

“Why, we don’t do anything funny with our polls.  We just go out there, we try to find the best sample we can, and try to give you the most accurate presentation we can, and that’s it.” But they use polls to make and shape public opinion and they will do so until a week before the election.  Pay attention to the polls in the last five days.  That’s where the pollsters will want to actually have it right.  And I’m just telling you, I don’t want you to be surprised if we get down to 10 days and five days and these polls show a sudden surge by Trump that they can’t figure out, they’ll say. 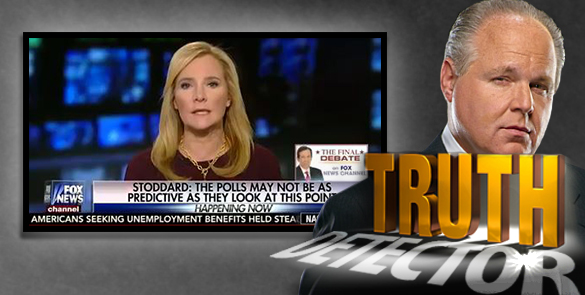 This is what they’re trying to say, and people are abandoning Trump in droves.  They’re trying to make that happen.  Who knows?  We don’t know whether it’s being effective but they are trying to do it.  But I’m telling you, with A.B. Stoddard out there warning everybody to be a little suspicious of polls…

RUSH: A.B. Stoddard on Fox from TheHill.com mentioned about a half hour ago that the polling data that we see right now may not be entirely predictive.  It’s her way of saying that she doesn’t think the race is this far in Hillary’s favor and is nowhere near over.

And I want to take her occasion of making that comment to remind you again that all of these polls are being used to suppress support for Trump.  They are being used to encourage people to abandon Trump.  They’re being used to encourage Trump to abandon his campaign.  Their purpose is to dispirit and depress everyone and convince as many people as possible that it’s over, that Trump is a buffoon and has no chance whatsoever, all of it’s a waste of time, they might as well concede now and you might as well concede now.  That’s the purpose of it.

The pollsters, about five to seven days out, is when they issue their last poll or the last two polls before the election. Those are the ones you really look at, because they are the polls their reputations will be staked to, and every polling unit at the end of a campaign wants to be trusted and reliable, they want to be shown to be right.

This is a race where their objective, the Clinton campaign, which includes the media and the White House and the Department of Justice and every other government organization and affiliate, their objective is to make Trump more unlikable than Hillary.  Her negatives are already higher than any other candidate who’s ever been elected president.

They can’t turn that around.  They can’t make her liked.  They can’t raise her favorable numbers.  She can’t do it herself.  She’s had two debate appearances, and there’s nothing there that makes people go, “Yeah, yeah, man, I want this. I want more of this. Yeah, I want what she’s saying.”  She doesn’t inspire any of that.  So everything here, as far as they are concerned in terms of strategy, opposition research, is to try to make Trump hated, more unliked, more suspected than Hillary is.

Now we gotta get to the phones.  We have to start.  We’re gonna start in Clearwater, Florida.  Jacqueline, you’re first.  It’s great to have you.  I’m glad you’re out there.  Hello.

RUSH:  Jacqueline, I appreciate it.  Let me tell you something.  I say frequently here that I don’t watch news, cable news, any of it, anywhere near regularly.  There are a host of reasons, all of which I have shared.  The primary reason is that I never discover anything I don’t already know.  I never hear an opinion I haven’t already considered.  And too much of it is predictable; formatically it’s predictable.  Content is predictable.

And I don’t watch CNN for the same reasons.  I just don’t watch any of it.  I haven’t watched World News Tonight or the evening news or a Sunday morning show in I can’t tell you — the last Sunday morning show I watched was the one I was on, Fox News Sunday with Chris Wallace.  Other than that, I just don’t.  It’s for a combination of reasons, as I say.  Number one, it isn’t news anymore.  I know that the things I believe in and the people I believe in are gonna be savaged.  They’re gonna be unfairly criticized. I know that I’m gonna be.  I know that if I ever show up, I’m going to savaged and lied about and besmirched, you name it.

In fact, if I do watch it, I get even angrier because I’ll see what I happened to see today.  There is an absolute reprobate leftist who is responsible for more character assassination and damage via his website than almost all of them.  And I watch Republicans and conservatives regularly sit next to him and appear with him and agree with him.  Why do I want to watch this tripe?  Why would I want to read establishment Republicans sidling up to Democrats so that they can maintain their proper membership in the establishment, who won’t even unify around the concept of defeating Hillary Clinton.

So I’m a lot happier.  If you want to know why I remain optimistic it’s because I do not immerse myself in the single greatest source of pessimism and depression that exists in American media, and that’s today’s news media.  I avoid it.  “How do you prep the show, Rush?”  I have my ways, folks, but most of show prep today, you know what it really is?  It’s catching up on events and then remembering what I already know about the people and what they mean and what they want, the left.

CALLER:  While it emboldens me and emboldens you to vote for him, that’s not true of everybody else who’s kind of disgusted by his behavior.

RUSH:  Let me tackle this because — and I’ve got 30 seconds to do this — in the first place, the mechanism to do that, there isn’t time, and it would not be automatic that Pence would be the replacement.  I mean, you’d have a bunch of conservative commentators and other Republicans, “Well, if you’re gonna get rid of Trump you gotta get rid of the ticket and put somebody else in there!”  It’d be a big fight.  Here’s the thing.  Whoever, if this were to ever happen, would get the same treatment that Trump is getting.  They’d be called Trump Jr. or somebody couldn’t… They’re gonna do the same thing to anybody that gets the nomination. Always!

RUSH:  Okay, folks, look, just hang in. We still don’t know where things are headed.  We know where the media wants you to think they’re headed, but stay up. Stay engaged.  Don’t let them convert you into a depressed… Not quitter. Just don’t cave yet.  Not time.  That’s what they want.  We don’t know how it’s gonna end up yet, is the point.  They don’t, either.