What Trump Should Do in the Final Debate

RUSH:  I appreciate that.

RUSH:  Well, I think he will, ’cause he talked a lot about the WikiLeaks.  And he had it down pat.  I have to tell you, I’m still in the process of organizing.  I still need the crib sheets in front of me to remind me of everything that’s in these leaks so far.  And he was rattling them off.  He wasn’t spending a lot of it time on each one, but he was rattling them off and making a point about them.  And when he got to the one about Hillary having to be coached when to smile, he illustrated what that would be like if he had to be coached to smile.  He faked reading a teleprompter and then said, “And now it says to smile.”  And then he smiled real big.  And then went back to what he was saying.  It was a great, great way of mocking her.

But you need to know something out there, Sean.  The Drive-Bys have already subtly begun the conversation that we don’t even need a third debate, that Mrs. Clinton should just cancel it.  The only side for her is a downside.  She’s got this election won.  It’s in the bag, they say.  It’s over.  There’s no reason to give Trump another chance to get back in it.  Another debate isn’t necessary, the Drive-Bys say.  And, by the way, this is all coming from the Clinton campaign.  The Drive-Bys do nothing independently.  It’s all from the Clinton campaign.

So the talking points are out there.  And one of the other reasons being given is that Trump is so embarrassing, and these debates feature language that’s just not suitable for our children.  It’s just the worst.  It’s a national embarrassment to have Donald Trump with this kind of national exposure.  The only decent thing to do, they say, is cancel the third debate.  We can’t subject our children to any more of this.  We can’t subject our women to any more of this.  This is some of the lowest of the low that Trump represents.  He’s just filth personified, and there’s no reason to have this third debate.  That’s starting to simmer out there. 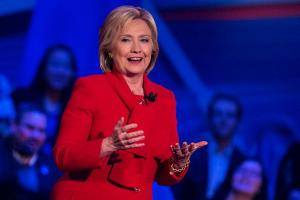 So I just want you to know that there is effervescing beneath the surface this — I think it’s an effort to build up support somewhere for canceling the third debate.  And the reason for it would be, the real reason would be that Hillary’s got nothing to gain.  They think it’s over. I mean, they really do. They think she’s won it in a landslide, it’s in the bag, it’s finished, and so the only thing that could happen for her would be things that go wrong.

RUSH: Charlie in Sedalia, Missouri.  You’re next, sir.  Great to have you with us.  Hi.

CALLER:  Thank you, Rush Limbaugh, the legend lives. Greetings from the queen city of the prairies.  How are you, sir?

CALLER:  I was wondering if you think it would be appropriate or inappropriate if next week when Trump’s hammered by Hillary about his locker room talk, if he were to reply by saying, “Mrs. Clinton, to plagiarize a line from you, at this point, what difference does it make?”  Would that work for him?

I think Trump’s gotta appeal to the American people, and not just convince people that she’s dangerous and so forth.  He’s gotta make himself look better, not make her look worse.  And I don’t mean that he looks bad.  I mean in a comparison of the two, he’s gotta become more desirable.

RUSH:  Look, folks, I know we want to see Hillary Clinton blown to smithereens, but that may not be the best way to effect victory in the next debate.