RUSH: The WikiLeaks dump continues.  It’s a bunch of BS being spread out there.  Folks, you’ve gotta be very, very careful.  This always happens.  A bunch of so-called conservative websites that I don’t believe are conservative; I think they’re run by a bunch of pajama-clad liberals in their basements purporting to be conservatives, are manufacturing completely erroneous and distorted examples they say they have found from the WikiLeaks dump, and they’re absolutely wrong.

I’m not even gonna waste time pointing them out.  Just be very, very suspicious.  If you don’t recognizance a website, if you don’t think you’ve heard of it before, ignore it.  It’s a better bet to ignore it than to believe it and then be guilty of perpetuating BS that you then retweet, forward as an email or whatever that you do. 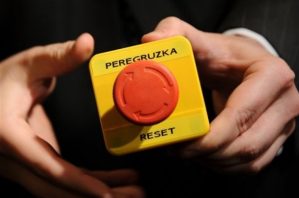 “Failure to act will put promotion chances at risk, according to local reports,” from the KGB, and all of this “[c]omes amid worsening relations between Russia and the West,” which means us.  “Putin cancelled a planned visit to France amid a furious row over Moscow’s role in the Syrian conflict.” Putin is furious over what’s being said about him by the Democrats.  The Democrats are blaming him for hacking.  I watched Marianne what’s-her-face, the gal that lives in Boston, the Democrat strategist-consultant that’s always on Fox, Marianne Marsh.

To defend the stuff that WikiLeaks has found and published… They’re not denying any of it.  Podesta and these people are not denying any of it.  The standard line from the Democrats is (smug shouting), “This is illegal! This is a breach of faith! This is against the law!  This is the result of a Russian hack!  The Russians are attempting to insert themselves into the outcome of a presidential election!  It’s horrible!”  They’re not denying the truth of it, but dumping it all on the Russians, and the Russians are claiming they didn’t have anything to do with this.

So Putin is getting ticked off about it, and even the beloved Mikhail Gorbachev has warned that the world is at a dangerous point due to rising tensions between Russia and the US.  It is percolating out there.  People are not noticing, paying attention, ’cause their attention is diverted.  Anyway, Sergey Lavrov, he’s been on TV explaining the Russian reaction to some of these charges, and in one place he says it’s flattering to get this kind of attention, but we’re not doing any of this.  We’re not hacking the Democrat servers!

You know, and for her to blame the Russians? I mean, the WikiLeaks dump… The degree to which the Democrat Party and the Clinton campaign is coordinating with the Department of Justice, the FBI, the White House in running Hillary’s campaign and protecting her from every investigation which has been looking into her, you want to talk corruption? We haven’t even seen this kind of corruption!  Richard Nixon? This is Romper Room compared to what they were accusing Nixon of, and we have it all documented.

We’re gonna try to make hay of it during the program today. But Sergey Lavrov was on the program today, and Christiane Amanpour was interviewing him, and she said, “Can I just try one last question?  It’s a bit cheeky, but I’m gonna ask you.  Russia had its own Pussy Riot moment.”  Pussy Riot, by the way, is a Russian feminist punk rock protest group.  They’re based in Moscow. Just so you understand what Christiane Amanpour is asking about here.

I mean, it’s… (sign) It’s just CNN’s way of getting the word on the air, is what it is.  That’s all they want to do is get the word “pussy” on the air so they’re using “Pussy Riot” in a question to Sergey Lavrov.  So she says, “Can I just try one last question. It’s a bit cheeky but I’m gonna ask you Russia has had its own Pussy Riot moment.  What do you think of Donald Trump’s Pussy Riot moment?”

LAVROV:  Well, um… I don’t know.  English is not my mother tongue. I — I don’t know that I would sound, I mean, decent.  There are so many pussies around your presidential campaign on both sides that I prefer not to comment about it.

RUSH:  And out of the mouth of somebody who claims not to speak English well, comes gems of truth.  Were you able to understand through the thick accent? (interruption) Oh, you weren’t?  I need to play it again, folks.  There are some people here that claim they had trouble understanding the very thick Russian accent of Sergey Lavrov.  So here again, Christiane Amanpour — just desirous of getting the word “pussy” on the air at CNN — has to ask this guy about something that’s totally unrelated: The name of a punk rock protest group named Pussy Riot.

So she does that, and she says to this guy, “You in Russia had your own Pussy Riot moment.  What do you think of Donald Trump’s Pussy Riot moment?”  (replaying of sound bite) And in not commenting on it, he just did.  “There are so many pussies around the presidential campaign on both sides.”  So there you have it, folks. So that’s what… They’re sucking us in.  They’re sucking us in and they’re taking us down the whirlwind. We try to get off.

We try to maintain here a level of propriety and decency and the Drive-Bys on the left and their guests on those shows just suck us into this filth and take us right down wherever they’re headed with them.