RUSH: Here’s Molly in Washington, DC.  Great to have you on the program.  Hi.

CALLER:  Hey, Rush.  Thanks.  And thank you most of all for the most poignant comment of yours of all, which is America is ordinary people doing extraordinary things.

CALLER:  Thanks a million.  I have a question.  I wonder if a lot of this election doesn’t boil down to something that is between the lines, something that people talking about many times every day 24/7, 365, and that is — and I don’t know a lot about social anthropology, but at the bottom, there are people in the Democrat Party and those who are RINOs fearful of, because of Trump, the reemergence of American manhood, masculinity, a sloughing off of men being hesitant, cautious, subdued.  You’ve said many times, men have been run off campus, out of the professions because they’re not going into them anymore.  Out of the military. We witnessed what happened in the Navy recently, removing the word “man” out of sports.

Maybe Luntz, it was Frank Luntz I think you mentioned, who said that the Republican psyche is dead.  Hooray.  Good-bye and good riddance.  Nothing times nothing is still nothing.  What we need is the reemergence of testosterone.  Are they afraid of the strength of testosterone, but more important than that, are they fearful of the power and might of logic?  Men have tremendous logic.

RUSH:  Well — ha ha ha — you are great. You are filled with things that I would just love to react to, and that men have tremendous logic.

RUSH:  There’s a counterpart to that, too, that one is not supposed to say.  Let me start dealing with your questions here.  Number one, are they afraid of manliness?  Is the left afraid of manliness, and is this one of the things that they’re actually attacking?  Well, I think they don’t like manliness.  I don’t know that that’s a factor in the campaign, but it clearly is behind feminism and breaking down manliness and defining manliness as predatory behavior, child abuse, wife abuse. They’ve tried to categorize this as quasi-normal male behavior and that women and children aren’t safe.  It’s subtle to the extent that — I think rather than that, I think what really, really — I don’t think “frighten” is the right word.  Maybe. 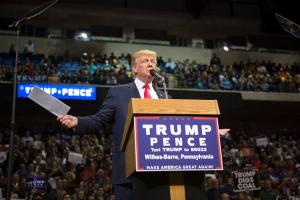 Now, about Hillary, I hadn’t heard this, that she’s getting letters from coaches. (laughing) Isn’t this a neat trick?  Democrats get letters from everybody when a cause comes up.  They got letters from school kids back in 1995 claiming they were being starved.  They were going hungry in school because of school lunch cuts.  So now coaches are writing Hillary Clinton, “I just want to let you know that Trump’s not right.  The people in my locker room don’t talk that way.”

There’s a writer for the Washington Post that has a column on this today. That there may be this kind of talk in the locker room, but they’re not the leaders in the locker room.  The leaders in the locker room do not talk the way Trump says that he was talking his locker room talk.  Ladies and gentlemen, I happen to have been in locker rooms.  I was required to go there as part of my job, and I’m telling you it’s unmerciful what can be said, the practical joking, it is a man’s place.  You had better be ready.  And if you have any vulnerability, it will be found, and you will be teased beyond your ability to take it.