Reports from the Front: 10-Year-Old Gets Rush Revere from Her Local Library… But Another Library Rejects the Books!


RUSH: I want to grab the phones now because it’s Open Line Friday.  We try to take as many as we can and we have a 10-year-old from Baton Rouge.  This is Amelia.  It’s great to have you with us.  Hi.

CALLER:  I wanted to tell you how much I like your Rush Revere books.

CALLER:   And my brother read them all, too.

RUSH:  No kidding.  How old’s your brother?

RUSH:  Who’s your favorite character in the — I can guess, I guess it’s Liberty, I bet you like Liberty, the horse?

RUSH:  Well, you know what? When we finish here, don’t hang up because the nice man who answered your call and screened you and put you up wants to get your address, and I want to send you a full-fledged Liberty stuffed doll.

RUSH:   Since you’ve got all the books, I don’t need to send you those.

CALLER:  No, I don’t have the second one and the fourth one.

RUSH:  Oh!  Well, pardon me. I assumed you did since you’d read them all, the second one and first?

CALLER:  I got the other two — I got the ones I don’t have — from the library.

RUSH:  Oh, okay.  Gosh, they let it…? They let it into the library?  That’s progress.  So you don’t have the second one and the fourth one?

RUSH:  — copies in case, you know, your brother spills something on one of them, you’ll have some pristine copies just for you.  Thank you.  Now, hold on.  Don’t go away.

RUSH: Here’s Chris in Sanger, California.  I’m glad you waited, sir.  Great to have you on the program.

RUSH:  You got it all the time?  Oh, because of the confusion in the name? I get it.

RUSH:  Okay.  Okay.  I was thinking about other reasons why that might be, and I was curious.  But we won’t focus on that.  What was the reason for your call?

CALLER:  Well, I am just so angry because I contacted the Rush Revere group to see if they would donate some books to me so I could donate them to my daughter’s school.  She’s 10-years-old. She goes to John Wash in Sanger Unified [School District], and they graciously sent me the first three in the series. I donated them to the school, and that was a year ago.  And I just found out on Tuesday night at our PTA meeting that the book could not be entered into the library because the librarian stated that they were politically leaning and historically incorrect.

RUSH:  They are specifically not political!

And they teach the truth of the American founding.  There’s no politics in this.  There’s no conservatism or liberalism.  You know what this is?  This is just your librarian with her own politics.  She’s injecting and imposing her own political view — and because my name is on the book, she’s assuming that it’s rotten and bad and wrong and she’s not letting it in the school.  That’s outrageous! It’s simply outrageous!

RUSH:  Where is Sanger?  Where in the state is Sanger, in California?

RUSH:  Because we go to great lengths to make sure these books are not political, especially not in relationship to modern day politics and what might be going on.  We’re just trying to teach the truth of the founding of this country because it isn’t taught enough anymore, and we’re doing it… I mean, for crying out, a talking horse is political?

RUSH:  We’re trying to… We write these books in such a way that the people that read them are actually taken to these historical events via time travel, and they actually get to see the events take place, such as the debates at the Constitutional Hall and the Pilgrims arriving and the trip across the Atlantic Ocean and all that. That burns me up!

CALLER:  It makes me so angry.

RUSH:  Did you say anything to her about it?  The librarian.

CALLER:  Yes!  Oh, yes.  I said it right in front of everybody there. I said, “It is not politically leaning.”  I said, “I’ve read every single one of his books.  They have nothing to do with politics, and they’re historically correct.” I said, “Rush did all of the research.”

RUSH:  We have a whole staff of people that puts these books together.  We’ve got the people that do the illustrations.  We’ve got fact-checkers and double-check when we make historical assertions of fact in these books.  That’s the first and foremost objective is that what we write about is true, not politics.

RUSH:  We’re not propagandizing in these books.  There’s no need to.  The truth of the American founding is a great, beautiful story.  There’s no reason to lie about it.  They’re the ones that do that.

RUSH:  Well, is it…? No change?  I mean, they’re still not gonna let the book stay in the library?

CALLER:  No.  My husband picked them up yesterday, and we are going to donate them to another school and hopefully they will put them in their library.

RUSH:  I suspect that you’ll have some takers now, after today. 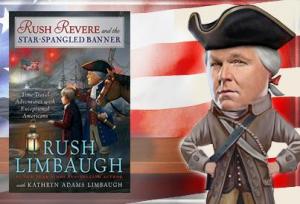 CALLER:  You sent me the first three.

RUSH:  Just one copy of the first three?

CALLER:  No, you sent me three copies of the first three, and I donated them to Terry’s House and another school in Fresno Unified.

RUSH:  Okay.  ‘Cause I was gonna say, we usually donate a package when these come up.  Well, look, I want to put you on hold, if you will. If you would give Mr. Snerdley — the nice man who screened your call. If you would give him some contact information so we can send you some more to be donated elsewhere. Since Sanger won’t take them, we’ll dwarf whatever influence Sanger has by donating them all over the place, if you want to try that.

RUSH:  All right.  So hang on.  You hang on just a sec, Chris, and we’ll be back as soon as we get your contact information… We’re not gonna be able to get to this until next week, so be patient, but we’ll make it all happen.

RUSH:  Thank you.  No, no.  Thank you for trying to make this happen.  You’re warming my heart, and I really appreciate it.

CALLER:  Oh, thank you.  I’m just glad my cell phone held out to get through the call. (chuckles)

RUSH:  You bet, and we’ll hope to talk to you again soon.