RUSH: Have you all heard of this imminent historian by the name of Allan Lichtman, L-i-c-h-t-m-a-n?  He is an occasional guest on cable news networks and he has been for years.  He is a history professor at American University.  He has a whole way of analyzing presidential races, and he says he has not been wrong since 1984 when he began to use his method.  He has accurately predicted the popular result, not the Electoral College result they mostly follow.  He has accurately predicted the popular result since Ronaldus Magnus had his landslide victory over Walter F. Mondale back in 1984.  He calls it the Keys to the White House analysis, and he’s predicting a big win for Donald Trump.

Professor Lichtman is giving himself an out though. He’s acknowledging that it is tight and he said that his system could be proven wrong in this election which means simply that he wants to keep his job teaching at American University.  He said, how big is the immigration issue in deciding the election?  Answer:  “I think immigration is a very important issue.  America is a nation of immigrants and immigrants have been demeaned for more than two centuries.  The two candidates have fundamentally different approaches to dealing with them.”

Anyway, the details, what his keys are, and I’m not gonna go through all 13 of them, but basically he is saying that this is Trump’s election to win.  It’s an issue-oriented thing.  He doesn’t look at Electoral College votes. He doesn’t look at polling data so much.  He looks at other things.  And he’s not been wrong since 1984.  So take that for what it’s worth and do with it what you will.

UPI.  We don’t hear much about UPI, United Press International.  But they also have been conducting state polls and they are reporting that Trump is gaining in all but five of them in this past week, when Trump was supposed to be seeing the bottom falling out.

Lichtman can have his theories.  I’ve got one of mine, and I’m gonna stick with it.  I have believed in it since this whole primary began.  American politics is within itself a business.  It’s like any other business.  It doesn’t want to be characterized as a business because politicians routinely rip into business as being run by dishonest sharks.  And politics, of course, is about the better things in our futures, it’s about issues and ideas and so forth.  And by business, I mean there’s certain things you have to do to climb the ladder of success in that business.

There are certain things you have to do before you are allowed entry into what we call the establishment.  For example, you get elected to Congress, you better do what the leadership says or you’ll not get reelected.  To hell what you think.  The leadership wants you to vote something you disagree with, you better do it or they will defund your next campaign, you won’t win reelection.  That’s how they do it. It’s standard operating procedure.  Both parties do it.  But there are other elements of the business of politics.

Politicians release their tax returns and they’re analyzed by others in the media who are also in the business of politics.  But Trump has never been in politics. He has never once lived his life or constructed his life to be judged in the political realm.  His advancement, his climbing his own success ladder is far different than what people in politics have to do.

Trump hasn’t done any of this.  He hasn’t lived his life as though he’s a politician and is gonna be covered as a politician.  So if it’s learned about and discovered then it’s gonna be measured the way we measure politicians.  But now he’s running for the presidency, and so the people that don’t want him to win are judging him and putting him into the political business or rubric and judging him accordingly, when you can’t.  You simply can’t.  And the proof of that is, they have not been able to convince Trump supporters to abandon him no matter what they’ve done.

Trump can’t even make them abandon him.  Trump says some outrageous stuff, he says some curious stuff, he does things that his supporters wish he wouldn’t do, but they do not abandon him.  And it’s precisely because it’s bigger than he is.  What Trump represents is the chance to wrest control back from these career political types to average, ordinary Americans who feel that career political types really don’t care about them or their future while they lie every day about how much they do care. 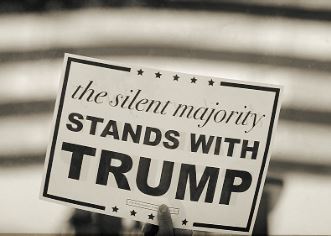 So I maintain to you that any attempt to assess this campaign, including his debate performances, by plugging Trump into the same system that we’re judging career politicians by is causing the analysts here to totally miss what may be going on with Trump.  And I’ll tell you that one of the big things — and I know this because a Washington Post reporter gave this away — one of the things that the career politicians are really worried about, you know, half the people in this country don’t vote.

A full 50% of the eligible voters don’t vote.  And we know this with statistical data.  We also know this because every four years various politicians in the media wring their hands, “It’s so bad for our democracy, half our people are not voting, what can we do?”  So there’s early voting and there’s motor voter registration, illegal immigration, anything we can do to ramp up voter participation.  Fifty percent don’t.  They don’t vote because they don’t think it’s gonna matter.  They don’t think their vote counts.  They think they’re powerless against this massive Washington establishment and it just doesn’t matter and they don’t even want to waste time paying attention.

Then Trump comes along.  And what they’re worried about is that some of that 50% is gonna show up and vote for Trump when they don’t ever vote, they’re hard to find, hard to poll, and it’s one element obviously here in the voting public or in the political public that the establishment doesn’t control.  If people aren’t voting, if you’re not participating, then you can’t say that there’s any control, so you can’t determine what they’re gonna do.  So what the establishment’s doing is doubling down on their attempts to impugn and attack and destroy Trump and his character by virtue of his personality, his mean-spiritedness to women and all this stuff, hoping to kill the enthusiasm that exists for Trump.

And I don’t think they’re gonna be able to do it.  It would have been done by now.  They tried it all during the Republican primaries.  When Hillary asked the other day, “Why aren’t I ahead (coughing) by (coughing) 50 (coughing) points?”  She meant it.  They’re sitting there thinking they can’t believe this guy is still standing and still has a chance.  But like our previous caller, still doesn’t exempt Trump.  His supporters still want him to go out and kick butt, and they don’t think he did against Hillary in the first debate.  They think he phoned it in the last half.  They don’t know why; nobody does.

But that’s the only risk that Trump runs.  Trump I don’t think — a lot of people disagree with me on this, by the way, but I don’t think the Drive-Bys can destroy Trump.  Trump is the only guy that can do that.  They can’t defuse the energy that Trump supporters have for.  He can.  I’ve always thought that’s the risk that he runs.  So when you look at the way they’re analyzing his taxes or his statements about Mexicans or the way he’s talked about women, I mean, the fact is — and they don’t want to admit this in politics — that’s how normal people talk about other people.  But with political correctness, they whisper it or they go to the bathroom to say it because the speech police are everywhere.

So I don’t think the establishment still knows what to do with him and how to go after him.  They’re trying to attach the same techniques that they use to destroy others in the political establishment, like Romney and like McCain and like George W. Bush and like Scooter Libby and Karl Rove, but it bounces off Trump, and it frustrates ’em.  This is not to say that I think Trump’s headed for a huge win.  I don’t know any more than anybody else does.