RUSH: To the phones we go, Steven in Kingston, Tennessee.  It’s great to have you on the EIB Network.  Hi.

CALLER:  Hello, Rush.  It’s a pleasure speaking with you from transplanted New Englander to the cow fields of Tennessee.

RUSH:  Thank you, sir, very much.  Great to have you here.

RUSH:  That’s a good point.  That’s a good point.  You might get some argument from people who think that Trump is Reaganesque because of a couple things. Although I have to tell you, Jeffrey Lord at American Spectator, who worked in the Reagan White House in the political office, political department… When I learned last year that he was an ardent Trumpist, I was a little surprised, and I said, “Jeffrey, what’s going on?”  He said, “Rush, I’m sorry.  I’ve met him, I’ve talked to him, and the early stages here reminds me of so much of Reagan in so many things.”  Trump has never reminded me of Reagan, but I didn’t know Reagan personally the way Jeffrey Lord and other people do.  So I can’t sit here and say that Jeff is wrong.  He knew Reagan intimately, and Trump knows him pretty well, too. You’re not the first person otherwise to make this reference to me.

CALLER:  The way he can do this ability to be in the limelight and almost be celebrity just like Reagan was, and the way the media’s attacked him like they attacked Reagan for him being celebrity or a doofus or whatever. You know, they tried labeling Reagan with, you know, unintelligent, and now they’re trying to use the same argument with, “Oh, he shouldn’t have the finger on the button!” You remember how Reagan was gone launch the missiles? 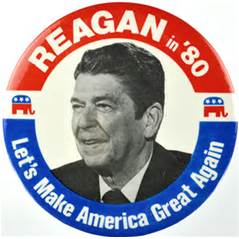 But one big difference:  Trump will do any media that asks him.

You know, if Talk Radio Mars called, Trump would make time. He’d go to a studio with an uplink to Mars.  He does everyone. He does every interview that people ask him to do. He’s everywhere, and he’s not afraid of ’em, and he’s not afraid to be who he is.  And a lot of people, that’s… You realize how many people in politics, you always wonder what they really are?  With Trump, you don’t.  You know exactly who he is.  Steven, I’m glad you called.