RUSH: At the site of tonight’s debate we have an MSNBC ban. I’ve banned all audio from MSNBC. There’s no reason to promote those people and increase their ratings, and I don’t want to lift the ban for this. I just want to tell you what happened. One of the Barbie doll anchorettes at MSNBC was talking to a crowd of students at Longwood University in Farmville, Virginia. That’s where this debate is tonight. I love this because this proves a point of mine that I have been trying to make of Hillary Clinton for months now.

This infobabe at MSNBC has gotten all these students out there. She’s chatting with them, talking to them. “Do you feel connected to Hillary as a candidate?” And the women in this crowd loudly shout, “No!” And they shake their heads no. They do not… This is not supposed to make the air. Somebody at MSNBC goofed. You’re not supposed to ask questions to which the answers you’re not sure of, and they did it, and they didn’t get the answer they wanted. The infobabe reported she got the same reaction from women at a sorority the night before.

Now, what’s interesting to me about this, is we keep hearing that women hate Trump. We keep being told that women despise Trump, they don’t want anything to do with Trump, and that Hillary is cleaning up with women, that women naturally gravitate toward Hillary Clinton. Well, they don’t, particularly in the case of young women. They don’t have respect for her. When young women learn about Bill Clinton and the women and the bimbos, and when they learn about Hillary’s role in all that, they don’t have this great feminist respect for Hillary.

Because the truth be told, feminism sold out.

Feminism actually sunk itself in the ’90s in order to save Bill Clinton. The left had a choice. You had all these women claiming Bill Clinton had abused them. One woman claiming he had raped her. It was a never-ending parade. It was so many women that the Clinton Campaign created a unit called “the Bimbo Eruptions Unit” to deal with them. Hillary Clinton was in charge of the Bimbo Eruptions Unit and its purpose was to destroy, to discredit, to malign, to impugn every woman with whom Bill Clinton had an affair who wanted to go public with it.

Women today, when they hear about it, there’s nothing to respect about that. Remember, women of today on college campuses think that all men are predators out there, and that rape is happening with great frequency on campus, and they hear about this and they’ve not been told by the Drive-By Media. They’ve not been told by the Democrat Party. This stuff gets swept under the rug. So when they hear about it, they don’t have this new-found respect for Hillary and they don’t connect with her.

Let’s go to the audio sound bites. I want to first play a Hillary sound bite followed by, of all people, Maureen Dowd and Katie Couric. Hang in. It will be worth it. This was just this afternoon in Haverford, Virginia. It’s a townhall campaign event as a prelude to the vice presidential debate tonight. And Hillary took questions from the audience, not from the media. She took questions from the audience, and a 15-year-old girl asked about “body image,” and said, “How would you help girls understand that they are so much more than just what they look like?” 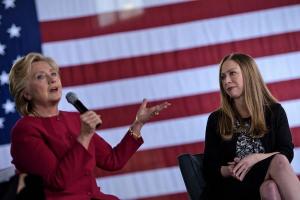 RUSH: Stop this for a second. Do we believe that this was a legitimate, unplanted question? No, folks. We don’t. We believe that this was a setup and planted question asked by a 15-year-old. “How would you help girls understand that they’re so much more than just…?” You mean women need Hillary Clinton to help them with this? This is an age-old thing, women’s appearance and what it does or does not do for them in their lives. This is why Undeniable Truth of Life No. 24 was written by me.

And I maintain that Undeniable Rule of Life No. 24 actually is one of the primary reasons modern era feminism got started in the first place, was to deal with the inequities — the unfair inequities — that women who are unattractive face that attractive women don’t. But stop and think. Now, here we have a 15-year-old asking Hillary Clinton how she would help girls understand there’s so much more than just what they look like. I mean, on the heels of Trump and Alicia Machado and that trumped-up, contrived controversy and scandal and now this? And the premise that Mrs. Clinton, only Hillary, can help girls understand there’s so much more than what they look like?

What a scam. Anyway, here’s what Hillary said. Listen carefully.

CLINTON: I mean, how do you get more acclaimed than that? But it wasn’t good enough! So we can’t take any of this seriously anymore. We need to laugh at it! We need to refute it! We need to ignore it! And we need to stand up to it. And especially the bullying. There are too many young women online who are being bullied about how they look and being shamed —

CLINTON: — and mistreated and sometimes that leads to tragic outcomes.

RUSH: Boy, is this rich. This is rife. This has such potential for in-depth analysis by me. But I’m going to delay that because I don’t want to get off point here. The first question of the rally is from a 15-year-old: “How would you help girls understand there’s so much more than just what they look like?”

Yahoo! hired her to do a TV streaming show. She was talking to Maureen Dowd who has a new book out. That’s why MoDo is doing the interview circuit. She’s from the New York Times, and Katie Couric says: “How involved was Hillary Clinton in the systematic destruction of the women who made these accusations against Bill Clinton?”

Remember now, we just heard Hillary say we’ve got to stop this bullying. This bullying has gone on too long. It’s too mean. It’s too extremist and all these unattractive women are being shamed and laughed at and we’ve got to stop the bullying. Katie Couric to MoDo: “How involved was Hillary Clinton in the systematic destruction of the women who made allegations against Bill Clinton?”

DOWD: She was involved in things like giving assent to the private investigator who, as Betsey Wright put it, “put down bimbo eruptions.” So that, you know, the private investigator would go and interview all of Gennifer Flowers’ ex-boyfriends and friends and it was a very threatening kind of atmosphere. Remember James Carville said if you pulled a dollar bill through a trailer park, they were kind of demonized on class, and then years later Bill Clinton would admit that it was true. There’s a very fixed pattern of Bill Clinton saying he didn’t do it, you know, Hillary and other people kind of trying to trash the women who said it and then years later Bill Clinton having to admit he did have the affairs.

RUSH: Whoa, hold on here just a second. So Hillary just this morning goes on and on about how mean it is to bully these poor defenseless women under assault, under attack by mean bullies on the Internet. And here’s Maureen Dowd reminding us that Hillary Clinton ran the bimbo eruptions unit that trashed the women that dared to say Bill Clinton had had an affair with them. She ran it. She even revived James Carville’s line about (imitating Carville), “You drag a dollar bill through a trailer park, this is what you’re going to get. You’re going to get a Paula Jones kind of tramp. That’s what you’re going to get with a dollar bill through the trailer park.” That’s all from the Bill Clinton campaign run by Hillary. Maureen Dowd pointing it out. So Katie Couric later on said this.

DOWD: Feminism sort of died in that period because the feminists had to come along on Bill Clinton’s retrogressive behavior with women in order to protect the progressive policies for women that Bill Clinton had as president. I know Hillary’s campaign says that it’s old, we shouldn’t be paying any attention, but I do think that feminism died a little bit when the feminists had to help Bill Clinton when Monica was actually telling the truth, as Gennifer Flowers had been.

RUSH: Don’t forget last night the MSNBC info babe asking the women of the university if they have a deep connection with Hillary Clinton and they all said, “No,” and they shake their head no, no. Asked the sorority women the same thing and they said no. This is remarkable. I mean, both Katie Couric and Maureen Dowd are going to vote for Hillary Clinton.

And yet here they are just yesterday admitting that Hillary Clinton bullied all of these women, ran the unit that bullied and destroyed, impugned and everything else, the women that Bill Clinton had had affairs with. And she admits that Monica Lewinsky was telling the truth. Gennifer Flowers was telling the truth, and yet Hillary was bullying.

Folks, I asked this question Monday, and I’ve asked it many times before that. How in the world do we have — this Alicia Machado story pops up, and Trump so-called bullies her. How in the world do you even dare talk about that and ignore what Hillary Clinton really did to women? And as MoDo said, the feminists, they had to eat themselves.

They basically had to bite the bullet and they had to cave on everything they believed, otherwise they would have had to publicly take Bill Clinton out as a sexual predator and as the exact kind of guy that should not be allowed to achieve power. That’s what feminism was about in the ’90s and they laid down. They sacrificed everything they believed for liberalism, proving that the feminists are liberals first. Just like every other liberal group, whatever faction they come from, they’re leftists first, and that’s the organizing principle that keeps them unified.