Real Men Should Ditch Colleges and Universities That Target Masculinity

RUSH: Try this.  I’ve been saving this story for just such an occasion.  U.K. Telegraph. Here’s the headline: “U.S. University Offers Course for Men to ‘Deconstruct Toxic Masculinities.'” (interruption)  You’ve obviously heard of this story. (interruption) You’ve not? (interruption)  It’s Duke University, where the Duke Lacrosse team happened. Yes, Duke University “has begun offering classes in ‘constructive male allyship,’ [sic] providing a space where male students are able to ‘question and deconstruct toxic masculinities.'” So the things that make men men, real men — the things that make a man a man — at Duke, it’s a list of negatives.

It’s a list of characteristics that we have got to erase.  We have to wipe out “toxic” masculinity.  “Duke University … held its first Learning Community session last week. The women’s center has organized a nine-week series of seminars, as part of the Duke Men’s Project.” So we learn that women are behind this.  Women are behind courses in which men learn to “‘deconstruct toxic masculinities to reconstruct healthier, more inclusive notions of masculinity.’ The nine-week course aims to promote ‘unlearning violence.'”

So we have now learned that male existence equals “violence.”  Real men are violent, and that is “toxic.” To be a man, to be masculine, is to be violent, and that has to be stripped away, wiped away! It has to be erased. “[W]ith sexual harassment and sexism remaining hot topics on American university campuses, [Duke] has created the seminar series under the banner of the Men’s Project. ‘Our purpose is twofold: to foster constructive male allyship, and to question and deconstruct toxic masculinities,’ the Men’s Project says on its website.”

You change the whole mode, you try. They’re not going to succeed at this because we’re dealing with human nature as programmed in genealogy, but they’re going to try to change the way men deal with women because that’s what this is really all about.  It’s about neutering men and having them become docile, essentially drugged-up stud farms for use when needed.  Now Dawn’s in there shaking her head.  Don’t doubt me on this.  What do you think modern feminism is?  It’s a giant testicle lockbox, if they had their dreams.  And here at Duke University that ought to be the icon for this course. 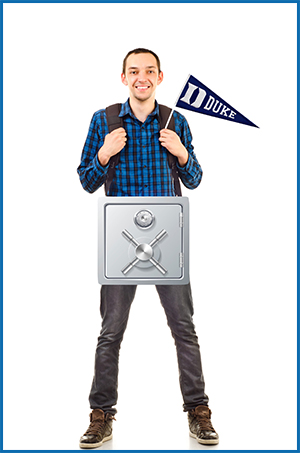 I mean, men will do things where women are involved that they would never dream of doing otherwise.  So if you get hold of that and you try to reorder, reprioritize, reteach, relearn the pursuit of women, and if you tell these guys that the last thing women want is anything masculine, what do you think they’re going to do?  Have you seen — look, it’s already happening.  All you have to do is find your latest modeling magazine.  It’s a shame.  It’s just a shame.  It’s called asexual.

My next story is about the NFL and how its numbers, its ratings have just gone to hell, and why.  Rasmussen Reports survey, people are fed up with what looks like Black Lives Matter running the NFL.  The NFL doesn’t want to admit that.  They don’t even want to admit they have a problem.  They’re trying to blame it on the election.  The election is just captivating everybody and diverting their attention.  And once the election is over and we get to the next season, the ratings will come back.  They’re willfully blind.  They have been willfully blind about all of this.

I’m telling you:  We’ve stigmatized achievement.  We’ve stigmatized hard work.  We’ve stigmatized exceptionalism.  We’ve stigmatized rugged individualism.  Have you ever looked at the men liberal ladies consider real men?  You tell me it’s not already working.  And real men, masculine men, look how they’re targeted and they are attacked and they’re called all these names.  It’s gotten so bad they make up stories about rape.  They literally make them up in order to carry forward this premise, this agenda.  Duke University offers a course for men to deconstruct toxic masculinity.

I’m going to tell you what we need to do.  The solution to this is not to take this on campus.  The solution is to stop men from going to colleges like this.  Just keep them out of there.  Just don’t send them anywhere near these places, for their own sakes. Stop throwing away money. Forget whatever reputation you think these great universities have because these universities actually now are undertaking to force men to give up the way God created them.

We end up with a massive mental emotional crisis with young women.  Is it any wonder so many people are messed up here, particularly coming out of college?  Look at all these people living at home.  Hillary even talks about all these millennials still living at home with their parents.  It’s a combination of factors.