It’s also the kind of thing that only benefits long-serving politicians. I maintain to you that if you were in politics you are going to structure your finances in such a way that your tax return looks a certain way. I submit to you that if you are a lifetime or longtime member in politics, you’re gonna do everything in your life to pass muster if it’s exposed to the public, including your tax return, which in politics it is because the tradition is that candidates release them.

Romney, of course, is not part of this because he was independently wealthy before he became a candidate, but that’s my point. If you don’t have a tax return that looks like the standard, ordinary, everyday politician with an income based on your congressional or Senate or whatever salary, then there are immediate red flags that are immediately held against you. And I might add the Clintons — despite only being paid, whatever, 400 grand for president and zilch for first lady, $170,000 when she was in the Senate, whatever as secretary of state…

Despite earning literally meager amounts of money, they somehow have $300 million now. Now we know how, and nobody looks askance at that. Nobody thinks that odd. Nobody thinks there’s something corrupt. You have Trump with a loss of $916 million and people say, “Oh, my God! Oh, my God! Oh, my God! Scandal, scandal.” Why is there no scandal with Hillary Clinton earning $22 million in two years doing 20-minute speeches primarily to banks, the transcripts for which she will not release? Why is that not the scandal?

Why is there no scandal associated with the entire Clinton Crime Family Foundation, the Clinton Global Initiative, all of these people from around the world who have “donated,” quote/unquote, to the Clinton Foundation? We know what’s going on! They’re making investments in Mrs. Clinton as secretary of state or as an eventual president. Why is there no scandal there? Well, there is. It’s just not looked into because they have a standard, ordinary, everyday tax return like every politician alive has.

I’m a little long here I’ve got take a break. But you get my drift here, folks.

RUSH: Hi. How are you? Welcome back. No, no. Let me cut to the chase. My point is that this whole business of politicians releasing their tax returns is a scam in and of itself, and it is designed to keep outsiders from running. It’s designed to keep nonpoliticians from running. I think having to reveal your tax returns is one of the primary reasons why people don’t run. And politicians have this gamed up. They know how to prepare their tax returns structure their lives that their only income appears to be their congressional salary.

There’s nothing super special on it, ’til they leave office, then all of a sudden you find out how much land they own and — or when they’re so incumbent entrenched, they can’t possibly be beaten, like Harry Reid. I really believe that this whole tax return business is part of the scam that the establishment has put together to keep outsiders and nonpoliticians from running. And, furthermore, it allows the media to demonize private sector candidates as “rich and evil people, and people that you can’t trust,” when their tax returns show anything outside the norm.

Anything! Doesn’t matter what it is. It could be that they’ve made a lot of money. It could be that they’ve had a lot of losses that equal write-offs. This is exactly what they did to Romney. Anybody that has a tax return like Romney that utilizes any law applicable and thus looks complicated compared to your average politician… Remember, that’s the measure, that’s the standard. The outsider’s tax return as measured against Congressman X, Congresswoman Y, is going to, by definition, look more complicated and different, particularly if that private sector person’s been successful. 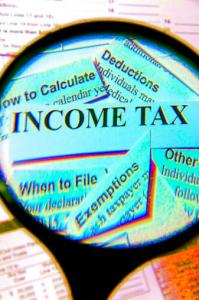 But when the media is the arbiter, there’s no way a guy like Trump or anybody on the outside can prevail and win, ’cause they’re gonna be dissed.

RUSH: I want to wrap up on this Trump stuff. I really, folks, think that this tax return business is a setup. Look, it’s easy to say now. But I’m gonna tell you: I have always thought this tax return thing was worthless, meaningless, a gimmick. It always ended up helping the Democrats, every time! Richard Nixon had his tax return leaked way, way, way back, and it was thought at the time that — and they got away with it.

They created the idea that Nixon was somehow scandal ridden, even though there was nothing illegal on his tax return. It was just leaked. But I have always suspected it; I’ve always been suspicious. The Democrats are always… They’re just always using this. They’re so eager for whoever the Republican candidate is to release his taxes, and one of the primary reasons why is it’s one of many techniques Democrats use to try to disqualify the Republicans on the basis that they’re rich or on the basis that they have more money than the average American.

The Democrats are the New Party of rich, by the way. But I’ve often thought tax returns don’t tell anybody anything. It’s not a window into anything. And therefore it’s obviously a gimmick, it’s a trick, and who’s ginned it up? The Washington establishment. I think the way it’s manifested itself now is that the tax returns of politicians are the result of calculating people to begin with. You have to be a calculating individual to be a politician.

And they’re designed to be that way! Financial disclosure forms are designed in such a way so as not to harm the politician involved. It’s part of being in the club. Tax return, ditto. Calculating people begin calculating every aspect of their lives from the moment they decide to get into politics, elective office or even appointed, and they calculate their financial lives so that they’ll look a certain way on a tax return.

Well, a private citizen doesn’t even think of calculating in the political way. A private citizen has other considerations in business, whatever. Everybody’s got specific reasons for doing what they do. But politics has its own set of specific reasons and behavioral patterns that you must engage in if you’re gonna be successful. So here comes an outsider knockin’ on the door, knocking it over, trying to get in to the insider club.