RUSH: They’re telling me on the other side of the glass that they’re betting in there on what I’m gonna start with. What else is there? What are the possibilities? What are you betting on in there? (interruption) Are you kidding me? You think I would actually open with Kardashian, which you’ve now forced me to do? You actually think that I would mention the robbery in Paris leading off the program?

What’s the other one? The Clinton love child. So far that’s a Drudge exclusive. (interruption) Oh, has the Daily Mail picked it up? Okay. But nowhere else. I mean, they’re avoiding that story like the plague. Well, that’s the natural starting point is Trump’s taxes. But I have some questions about this before we get started with the details.

The illegal publishing of Donald Trump’s tax return encapsulates and validates the reason why an outsider absolutely must be elected president, if you ask me. This is an act of illegality. Donald Trump has followed the law. Nobody in this is even alleging he broke the law. He certainly hasn’t been accused of it by the IRS or anybody else.

We’re talking about 1995. Donald Trump has followed the law. The media broke the law. The New York Times breaks the law. Do you realize how much lawlessness is dominating the events every day in our country from illegal immigration to the Clintons’ illegal pay and play for their foundation, to the Clintons illegal accepting payoffs and front money in advance of her being elected president and while she was secretary of state.

Do you realize all the lawbreaking, the real illegality that we are dealing with every day, the breakdown of the rule of law, and that’s not the story. Donald Trump has followed the law, the media has broken the law, and the illegal publishing of Trump’s tax return I think, again, illustrates, validates, if you will, the reasons why an outsider absolutely must be elected president.

The media may have worked with the IRS to break the law. We already know the IRS breaks the law. We know the IRS broke the law in denying tax-exempt status to a number of conservative fundraiser organizations. We know that Mrs. Clinton is routinely violating the law as secretary of state with her email server. And the lying that the FBI director documented that she engaged in, not in her interview, but that she’s lied to congressional committees, she has lied to the American people.

We weren’t supposed to learn about the fact that she believes half of Trump’s voters could be put in a basket of deplorables. It’s no wonder Mrs. Clinton won’t go out and do what Donald Trump is doing right now, or was earlier. He was having a sit-down with a bunch of military people, a bunch of veterans at an organization in Washington after having given a speech. He’ll talk to anybody who wants to talk to him, any time, any day, about anything.

Mrs. Clinton can’t afford to because they have to really ride herd on making sure she doesn’t say things in public like she says in private, which slowly and surely are leaking out. But the breakdown of the rule of law — the abject lawlessness that is determining the future, determining the direction our country is traveling and going — it’s time it stopped. And even the editor of the New York Times, this Dean Baquet guy, said he would gladly go to jail if somebody sent him the Trump tax returns and he published them illegally.

It’s illegal for the IRS to share that information with anybody. It’s illegal for the Times to publish it. But nobody’s talking about that. Listen to this. This is Glenn Thrush writing at The Politico in a story headlined: “The Week That Will Decide the U.S. Election — Five things to watch in a week that will likely pick a president.” You want the opening paragraph of this story? Here you go. Sit down. “If there’s one thing we’ve learned about the 2016 electorate…” That’s you.

“If there’s one thing we’ve learned about the 2016 electorate after many dozens of polls, it’s this: The Republicans could have nominated a mile-high mound of flaming medical waste and between 38 and 43% of the American electorate would have voted for it over Hillary Rodham Clinton.” Now, you might think it’s a clever line, I might think it’s a clever line, but what it is is an attempt to dismiss and denigrate Trump by essentially saying that opposition to Hillary is out there because anywhere from 38 to 43% of the American people are a bunch of bigots.

Thirty-eight to 43% of the American people are a bunch of closed-minded whatevers — deplorables, bitter clingers, what have you ’cause they would vote against Hillary Clinton no matter what. “The Republicans could have nominated a mile-high mound of flaming medical waste…” So that is — and they’re all over the place, folks. That’s just the latest indication of how you are thought of by the Democrat Party, by its willing accomplices in the Drive-By Media and the Washington establishment in general.

I’m just telling you. It’s all there for you to soak in and accept it. “Dem[ocrat]s Build Files to Track Trump ‘Stain.'” That’s another Politico story with yet another reference to a mile-high mound of waste. The Democrat Party “aims to hang this [Trump] around Republican necks for years.” Washington Post: “A President Trump Could Deport Freely.” This is a story designed to scare leftists, liberals, and pro-illegal immigrant forces by suggesting that Trump literally could deport anybody he wanted any time and probably would. 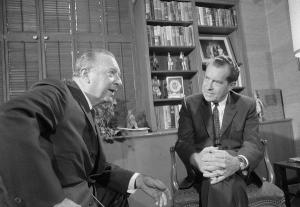 You don’t know that story? I will remind you of that story as it comes up in the Stack of Stuff. I’ve put everything here in as much of a consequential or date timeline order as I can. So we have, just to establish: The illegal publishing of Trump’s tax return to me demonstrates why an outsider absolutely must be elected president. What if it’s your tax return? You might be saying, “So what, Rush? Trump’s running for president. You gotta expect that most people release their tax return.” He’s chosen not to; there’s no law says he has to.

Democrats are seeking any evidence they can, seeking any advantage they can ’cause they don’t trust Hillary to win this on her own, obviously. So they willingly engage in illegality to do it, and now they’re being praised and high-fived, of course, by other media outlets and organizations for doing so. But it’s just a quintessential example of the corruption — corruption at the highest levels of our government and media complex — that we have to put up with and deal with every day. Trump followed the laws. The media broke the laws.

The media may have worked with IRS on to break the law. The IRS and the media appear to have conspired to help a Democrat, who herself is the most corrupt person to ever run for president. She’s not the best. She’s not the most qualified. She is the most corrupt person to ever run. But you know and I know that President Obama and the Department of Justice will do nothing to hold anybody responsible or accountable. There’s a scandal here. Everybody thinks there’s a scandal.

The scandal has nothing to do with Donald Trump. “What do you mean, Rush? We reported a lot of money, $916 million.” Yeah, nothing illegal about it. Hillary used the same tactic. The New York Times used the same provision in the tax law. That’s correct. The New York Times and Hillary Clinton have both used the same provision. Losses in one year carry over and count against whatever gains or income you show in succeeding years. The scandal here has nothing to do with Trump, but that’s not how it’s gonna be seen, obviously.

So we are up against crony justice, crony journalism, the illegal use of the IRS to punish enemies of Democrats, when to this day it is thought the only person that ever thought or tried to do that was Richard Nixon — and he never did it. He wanted to, but he never did it. In fact, he ended up being victimized. And I hear people say, “Well, I guess this is it, the October surprise, Rush. I guess.” No, this is not an October Surprise. This is standard operating procedure when the Democrats in the White House.

It’s the standard operating procedure the Democrats and the establishment are running the show. Corruption is on the ballot, not scandal. It is not conservatism, not what we wish. Corruption is on the ballot, and it’s all found under that capital D on your ballot. Okay, so Trump’s business lost some money. We can see Trump’s business lost some money. Hillary Clinton as secretary of state lost four people in Benghazi, including our ambassador. Hillary Clinton loses people. Trump lost some money.

His own, by the way, not yours.

Hillary Clinton also lost some 30,000 incriminating emails. Imagine if there was a carryover, a carryover write-off for debt ambassadors and colleagues, for broken laws and destroyed evidence. The Clinton family wouldn’t pay taxes for the next five generations, if you could carry that stuff over. But the real grating thing to me here is that losing lives — Benghazi — losing and destroying evidence — the email scandal and who knows what other corruption exists with the Clinton Crime Family Foundation — these end up being resume enhancers for Democrats.

The media, Barack Obama say Hillary’s the most prepared person ever to be president.

Of what? A mafia family?