RUSH: We have an ad… A Trump PAC actually. A pro-Trump, anti-Hillary PAC (so it’s not technically the Trump campaign) has hit the ground running with four different ads using the Obamas, and I have the audio of one of these ads. Three of them are with Barack Hussein Obama and one with his wife, Moochelle (My Belle) Obama. The Moochelle O’Bell (My Belle) Obama ad apparently is the most relevant considering that Bill and Hillary Clinton’s marriage is now an issue. So the title of this ad is, “Can’t Run Your House.” See if you remember this…

MICHELLE 2008: One of the things, the important aspects of this race is role modeling what good families should look like — and my view is that if you can’t run your own house, you certainly can’t run the White House. Can’t do it!

RUSH: You remember who said that? That was Michelle. You remember when she said that? (interruption) You don’t? That was in the primaries of 2008. She was talking about Bill and Hillary. This was during the primaries in 2008. That’s what the title of the ad is, “Can’t Run Your House.” It’s video featuring Michelle Obama on the trail in 2008 talking about Hillary Clinton. There’s an on-screen graphic. 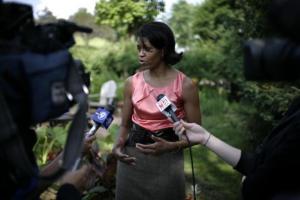 MICHELLE 2008: One of the things, the important aspects of this race is role modeling what good families should look like — and my view is that if you can’t run your own house, you certainly can’t run the White House. Can’t do it!

RUSH: Wow. Now, you might ask, “Okay, so how do you put something like that back together?” I mean, here’s Obama running for the nomination in ’08, Hillary’s running for it, too, and he sends his wife out to basically start talking about the marital infidelities and Hillary being the most cheated-on woman in America, unable to “run her own house,” and how can we dare let somebody like that in the White House? Now these two are supposedly the best of friends and Obama and Michelle run around saying that nobody’s more qualified ever to be president than Hillary Clinton.

So what do you think explains this? This is classic why people hate politics, ’cause they think everybody in it is phony. They think everybody in it is dishonest, because what most people are gonna conclude here is that all of this tripe that we have heard from this cycle, from Obama and Michelle about how great Hillary is, they don’t really believe it. And I happen to believe that. I think all of this is about party loyalty, preserving the Obama legacy or what have you. And I think they’re out there promoting Hillary Clinton with clenched teeth.

I think there’s really a lot of friction in these two couples, and I think it does date back to 2008. I’m gonna tell you, human nature is human nature, and human beings are human beings. In 2008, Hillary Clinton had been veritably promised the nomination, and then Obama came along, and well over half the Democrat Party instantaneously threw her overboard, dumped her and chose the attractive guy, which is exactly what happens in her own marriage. And I guarantee you there was in friction.

And then you remember what Bill Clinton told Teddy Kennedy? They were in South Carolina during the 2008 campaign, and Clinton thought that they had thrown the race card down on him, “first black president” stuff, and lying about having seen all these black churches burn, and Clinton is with Ted Kennedy. (impression) “Hey, Ted, you know the truth of the matter is, in the real world this guy’d be getting us our coffee.” Talking about Obama. Now, these people don’t get this stuff. I guarantee you they don’t.

But they sweep it aside for the greater purpose, the greater good, which is the never-ending power and control of the Democrat Party. So it’s an effective ad. We just have to wait and see.