RUSH: Just listen to this. This is… I don’t need to prepare you for it. I don’t need to lead into this. It’s Nancy Pelosi on Capitol Hill during her weekly press briefing today. And a reporter said, “There are reports now, Congresswoman Pelosi, that the train in Hoboken did not have positive train control. And I know that Congress last year voted to extend the deadline for implementation of that technology. What do you think about that, and is that something that you believe should be revisited in any way?”

Do you have any idea what’s coming here folks? Here we go, folks…

PELOSI: I don’t think we should have extended the deadline, when the trains were still running. If you’re gonna extend the deadline then stop the trains because the risk is there. It’s about time… It’s about time Congress faced its responsibility when it comes to the safety of the American people, when it comes to the security of their families in every way.

“I was just asked a question from an informed member of the press…” Right, and the answer gave her the opportunity to blame the Republicans for this. So we have at least one death, a hundred people injured, and the Democrats are already politicizing this and blaming it on the Republican Party. The party of open borders and who knows how much crime added to our streets because of illegal immigration that they sponsor. How about the crime that they sponsor with all of the politicization they’ve engaged in in race relations in this country?

And now Miss Pelosi wants to come along and claim the Republican Party has been lackadaisical in the security and safety of the American people. This is the party that just engineered the largest state sponsor of terrorism obtaining nuclear weapons. That’d be our friends, the Iranians. And, look, I could go on and on with a list of all of the things this party has done that has put at greater risk the American people.

But I point this out because we have a lot of Millennials out there — we have a lot of people in general — who say, “I don’t like politics. I just hate it. It’s always arguing and it’s confrontational,” and I want you to understand who politicizes everything. You know, sadly, the Republican Party ends up being blamed for all the so-called “politics,” when it’s used as a dirty word. Democrats are the corrupting agents. There is nothing sacred. There’s nothing. There’s no loss of life, there’s no accident, there is no event that they will not exploit for political gain. 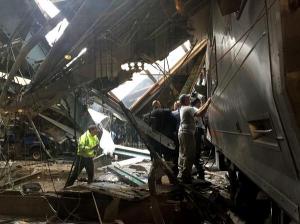 Well, I don’t think… If they can tag it as somebody that listens to me, sure, they would do that, but there are bigger fish right now in the presidential campaign. If they could tie something to Trump, if they could relate this to Trump… They’re already relating it; they’re blaming the Republicans for it. Now, you people that claim to hate politics, you Millennials and those of you who think you’re apolitical — you’re just going through life and you don’t like all this — I want you to know who’s responsible for this. You bought a whole bill of goods thinking the Republicans are the bad agents and the bad actors here.

(chuckles) We wish that some of what your allegations are were true! (chuckling) But they’re not. I mean, the Republicans aren’t even… You know, there’s a movement in Congress. After the override of the presidential veto on families being able to sue the Saudis, there’s a group of Republicans that’s already making a move to soften it, led by Lindsey Graham. There’s twenty Republicans who just cannot… When they win, it’s like, “Oh, my God, trouble! Now we… Oh, my God, they’re gonna hate us!” It’s like they think any time they win politically, that the American people are gonna hate ’em.