CALLER:  Good afternoon, Mr. Limbaugh.  Let me say that I have a 9-year-old daughter and she loves your book.

CALLER: I also want to say that I think Donald Trump needs to reinforce what people already know about Hillary Clinton.  I think in the next debate he should go in with a theme:  “How can you trust her?”  And he should also have a theme that “I work for Americans first.”  I think when she finishes talking, he should always start off with, “How can you trust this woman?  This is a woman who lied about sniper fire.  This is a woman who lied about her emails.” Every time he has the time to speak, he needs to drop another line:

So I think if he continues that narrative and pushes that narrative — “How can you trust her?” and “I’m working for Americans first” — I think it’ll be somewhat of a different debate.  He did some masterful things in the first debate.  The first 30 minutes he knocked it out of the park, and he was saying things that Americans know are true.  We’re on a bubble right now.  And as soon as the next president comes in and he this start messing with the interest rate, all of this is gonna come crashing down.  Trump was hitting that note, and I think people felt it, and she knocked him off balance.  That’s pretty much what I wanted to say, and I would love to hear your thoughts, sir.  Thanks again for the books!

RUSH:  Hey, don’t hang up yet, Wayne.  The first thing I was gonna say is the campaign needs to find you and hire you.

CALLER: Ha! I wish they would.

RUSH:  They need to find you for debate prep.  We need to find a way to get you in the inner circle for debate prep, because that is perfection.  That would rattle her; it would keep him on offense.  The moderators would come after him on it, but that’s something you can’t lose on because he’d be telling the truth about her! 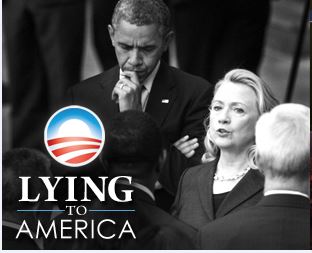 RUSH:  The thing about this that you’ve nailed: All he’s got to do is remind people of the truth about her, the things that she has done, going all the way back this email server, to Benghazi, to her lack of success running health care the first time, how health care today is a disaster, and how she was part of everything that’s gone wrong in these last eight years.  It’s ideal!

CALLER:  I mean, big lies, small lies. She lies about where her name came from. (chuckles)  She lies about everything.  And, as long as she pushes that, there’s really nothing she can say.  She’ll try to move on, but he needs to come right back to it.

RUSH:  Well, you know, that’s right. She will try to respond by accusing him of lying and doing other things. As long as he just ignored her and didn’t take the bait of what she retorts with or what she offers in advance like on offense. Just ignore it and focus on her and then take every one of those and relate it back, like you said, to what he wants to do to make America great again and how he could be trusted to do it.

RUSH:  And I think he should keep emphasizing that she’s been in Washington 25 years with nothing to show for it, as evidenced by her agenda!  Her agenda today is what it was 25 years ago.  She hasn’t moved it forward. She’s still complaining about the same things.

CALLER:  I just to want say again — and I don’t know if you heard me. I want to say thank you for your books.  Me and my child… I’m 42 years old, I’m an African-American, I’m a conservative, and I want to say that me and my child read your books together. She loves the talking horse, and it really makes a great, positive, quality time with me and her.  I think it’s really opened up a door in her mind that we can talk about.  She’s asking me to read the book and to read the book to her. So I really want to appreciate you for what you do on that.

RUSH:  I heard that, and one of the reasons I wanted you to hold on is that I want to get your mailing address or FedEx address so that we can send her a Liberty doll.

RUSH:  Does she have all the books?

CALLER:  No, we only have the Brave Pilgrims.  You know, I’m a truck driver, and we have to budget our money, so we kind of, you know, I’m just trying to space it out for Christmas and different things like that.  But, no, she doesn’t have them all.  We got through the Brave Pilgrims and she’s asking about more, but I really appreciate the doll, you know what I mean, and she’s gonna be excited. Man, I’m gonna look like a hero now.

RUSH:  Nine years old.  Okay.  Okay, well, look, don’t hang up so Mr. Snerdley can get your address.  We’re gonna put together an entire package for her that —

RUSH:   — we will send out that will be the Liberty doll — and it’s a big stuffed Liberty doll, looks like the talking horse Liberty in the books — and then some other things to go along with that,  plus the books. Just some fun stuff ’cause you made my day with this, couldn’t get any better than this.

CALLER:  You made my week getting on.  I just want to let you know, I mean, there’s a lot of African-Americans out here that listen to your show and that really want to raise their families in the right way, man, and I’m telling you, you got an army out here, man.  I wish you made yourself more available to African-Americans, because they really need to hear your message.  This is what we grew up with, a lot of us.  Like I said, I’m 42.  We grew up in conservative homes and didn’t know that they were conservative.  And when I heard you for the first time, it was like a light went off in my head.

CALLER:  No, sir, we don’t have a iPad.  We just got a little tablet that I purchased a couple years ago and we’ve been working off that tablet.

CALLER:  I gotta tell you, Mr. Limbaugh, I appreciate it so much.

RUSH:  I’d be honored to throw one of those in there.  That I know she’ll have tomorrow.  The other stuff we have to assemble, but that will come quickly, too.  You made my day —

RUSH:  — here, Wayne.  I really hope somebody in the Trump campaign heard your call.  That is an excellent strategy, an excellent battle plan.  Again, hang on.  Do not do the instinctive thing and hang up ’cause we’re not through.