RUSH: This Miss America, Miss whatever it is. Miss USA? (interruption) Miss Universe, yeah. It’s always the unexpected that gets you. Who would have ever thought coming out of that debate, that this is what you Drive-Bys…? Who would have ever thought, of all the pre-publicity in this debate and all the forecasting, all the predictions, all the chat-up…?

RUSH: Here’s Christopher in San Francisco.  Christopher, it’s great to have you.  Welcome to the program.

CALLER:  Hey, thanks, Rush.  I had heard that Hillary’s team had developed a psychological profile of Trump before the debate, and I had heard that there had been trigger words used, you know, talk about his father.  But I got interested in that, and I think she referred to his manhood during the discussion of nuclear weapons.  Using trigger words like finger, fingers, tweet, and hands.  I can quote the section if you like.

RUSH:  Fingers, tweet, and hands?  You think that she was trying to signal that Trump has not got a nice package?

CALLER:  Well, doing the thing that went back and forth with Rubio. 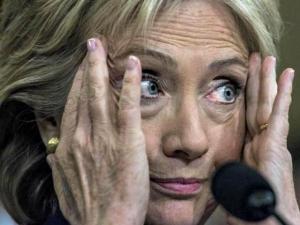 RUSH:  Right.  Maybe. Although you could be right about this; I didn’t notice any of this, ’cause it’s not a problem.  So I’m not sensitive to this kind of thing.  But it was always said of Reagan that we don’t want to let his finger being next to the nuclear button, either.  So it could well be that she was just trying to make a comment about his lack of preparedness or maturity or what have you.

I don’t… You may actually be right.  I mean, if anybody would know about these kind of thing, it would be Hillary.  She’s the one with the testicle lockbox — which has been documented, by the way.  We joke about it, but that’s the effect that she has, the Nurse Ratched-type effect.  I don’t think it worked on Trump, obviously.  But I appreciate the call, Christopher.  Thanks much.

RUSH: I’ve got a whole Stack.  I mentioned this at the top of the program.  I’m fascinated that this has become the centerpiece today, or at least this was this morning, of the presidential campaign.  This former Miss Universe, Miss Alicia Machado apparently has been on the Hillary staff, apparently been part of the campaign and providing comments on Trump.

“On Tuesday Machado launched her own attack on the Republican candidate, accusing him of abuse and ‘stupid things.’ But now two Associated Press reports from 1998 have revealed the Machado was accused of aiding attempted murder and threats to kill in Venezuela. DailyMail.com has asked the Clinton campaign whether they knew about the accusations, which do not appear to have ended in conviction, before the candidate spoke about her at the debate.”

They’ve pulled out of Ohio. Although now I’m making a big deal of it, don’t be surprised if they go back into Ohio with a little ad buy.  Don’t be surprised.  They kind of snuck out of Ohio.  Ohio, the Hillary campaign snuck out of as though they think it’s irretrievable.  They’re having trouble with African-American polling in Philadelphia, Pennsylvania, and in Florida.  That’s why they had to send Michelle Obama out there to help drum up black vote support for Hillary ’cause she can’t do it on her own.  Obviously.

And now they’re using this Machado babe, this former Miss Universe, as a way to go after Trump.  I don’t know.  There are things that happen in every campaign that I say to myself, “This is never gonna work,” and I’m often wrong; they do.  I’ll give you an example of what I’m talking about, in 2000, the Friday before the election, the big so-called October Surprise, the news that George W. Bush had a DWI, or a DUI, whatever, and I thought, “That’s not gonna matter, for crying out loud.”  And it might have.

There were a lot of people who said that George Bush had a sizable, comfortable lead, and when that news leaked, that a lot of people abandoned him.  I have trouble understanding that, but they say it did.

Daily Mail: “Now ‘Miss Piggy’ says Donald Trump used racist slurs when talking about African-Americans and that she can speak better English than Melania. Alicia Machado said in an interview with Natalie Morales that Donald Trump used racial slurs while speaking about African-Americans. The 38-year-old would not repeat what Trump said, she explained because ‘it’s too much rude for the black community, and I respect a lot of things.’  She also said about Trump’s feelings about the black community: ‘He don’t like that people.'”

“Machado has said in the past that Trump called her  ‘Miss Piggy,’ ‘Miss Housekeeping,’ and ‘Miss Eating Machine.’ She also revealed that she had no idea that Clinton would be sharing her story during Monday night’s debate. Machado criticized Melania Trump in an interview Tuesday, saying: ‘I think I speak more English than her.'”

Trump didn’t deny the Miss Piggy thing, right?  She gained 60 pounds, she got fat, isn’t that what he said?  Pretty much, did you say?  Yeah, I don’t think he denied it.  Hey, it was his pageant, and she was blowing it sky-high.  The reputation, I mean.

New York Times:  “Shamed and Angry: Alicia Machado, a Miss Universe Mocked by Donald Trump — On Monday night, Hillary Clinton turned Ms. Machado’s pain into a potent political weapon on the biggest stage.”  That’s why I can’t stand this paper.  It’s rotgut BS.  The New York Times has one of the most partisan readerships.  Everybody talks about the New York Times as a newspaper of record.  Its reader base is 99% leftist extremist.