RUSH: Listen to this.  This is Harvey Levin, TMZ. This is the Gen X and Millennial generations’ top-five networks.  It’s the gossip network.  They find scandal about public… Oh.  You know, I’m surprised there’s any news at all today.  Have you heard this?  Well, it’s no big deal to me, but I’m surprised that the networks haven’t shut down.  Brad Pitt and Angelina Jolie, it’s not working.  It’s sayonara.  It’s kaput.  It’s just the end of everything a lot of people have believed in, and you know what the supposed dispute is over? 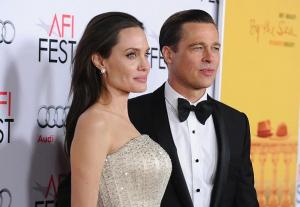 Apparently, Pitt recently started a movie with a French hottie by the name of Marion Cotillard.  I don’t know how to pronounce her name.  C-o-t-i-l-l-a-r-d.  I botch French every time I try to pronounce it.  So it just looks like it’s Cotillard.  I know it isn’t.  Apparently, he’s been… What did Colin Powell say about Bill Clinton and the bimbos up in Chappaqua? (interruption) I can’t say that. (interruption)  Yeah, you can say it.  I can’t say it.  How does Colin Powell…?

Because to so many people, I mean, that was what they aspire to, that kind of life, that kind of supposed relationship.  Just another lesson to all of you: Nothing that you know nothing about — nothing — is ever what you really think it is.  Particularly in this era, this day and age where everything is spin, everything is narrative, everything in the news is essentially the script of the daily soap opera.  You are really much safer being suspicious of everything as reported.

Everything. Whatever it is you think you know, doubt it until you can confirm it yourself.  Now, this leads me, I was going with TMZ and Harvey Levin who is the founder, the head honcho, and the conscience, if you will, behind the TMZ network and he was… Where was he?  It was TMZ Live, and the co-host Charles Latibeaudiere speaking with Harvey Levin about Jimmy Fallon about the criticism that Fallon is receiving for his interview of Trump last week.

Apparently, he was too nice, he was too engaging, he was too accommodating.  He wasn’t supposed to be. Like can you believe…? I still can’t believe it. I really can’t believe this, folks.  I can’t believe the way they, on the left, everywhere, are dumping on Matt Lauer.  You know, at the presidential forum, he first goes out there with Hillary and the controversy is he was wearing an earpiece and somebody in the booth was urging him to not let go of Hillary and her email question, to keep hammering and hammering.

Hillary got visibly upset, and there was nothing unusual — there was nothing wrong with — his line of inquiry.  In fact, it’s the kind of questions that Hillary should be getting every day. So Matt Lauer asks them, and to this day you open the New York Post or the New York Daily News and you’ll read the latest story about how Lauer is in dire straits. NBC threw him under the bus and everybody at NBC thinks it was a horrible job. He may lose his career over this. It’s incredible!  You couldn’t get more protected than Matt Lauer before this.

You couldn’t get more cemented in the approved relationships of the upper echelons of the ruling class and the establishment — from New York to the Hamptons, he was it — and they’ve thrown him overboard.   The stories about even the NBC brass.  I’m sure Lauer is up there scratching his head, saying, “I just did what they said in the earpiece.  And he was accused then of going easy on Trump!  Because, you see, there isn’t any media today.  There isn’t any news.

The purpose of media today is to keep reporting and reporting until the viewpoint they want you to have, you have it.  It’s about creating an opinion.  It’s establishing and creating opinion.  It’s not about bias so much, although you can’t do that without bias.  It’s not about lack the objectivity.  The media’s purpose now is to make and create the opinion that they want people to have.

LEVIN:  An absurd criticism.  To me, it’s like the media. It’s so weird to me is that there is an expectation now that the media is automatically supposed to be an attack dog, depending on what your political leanings are, whichever side you’re on.  There’s this expectation that if you don’t attack, if you don’t go for the jugular, you haven’t done your job.  Nobody’s reporting the news anymore.  Everybody’s just attacking.

LEVIN:  And that’s the weird thing about this election is that I think media has become more irrelevant this time around than they have in the history of television.  I really believe that.

The news is exactly this. He’s exactly right: You gotta go for the jugular of the person you don’t want to be elected — in this case, Trump — and if you don’t do that? If you’re in the Drive-Bys, and you don’t do that, your fellow Drive-Bys and establishment members are gonna savage you, and it’s starting to happen a little bit to Fallon.  It is still happening to poor old Matt Lauer, who I am sure is in PTSD shell shock over this.  These guys don’t know what that kind of criticism is.  We get it every day and have for 27 years.

It’s part of being conservative in life and as an American, but they don’t know how to deal with it.  They’re totally unaccustomed to it, professional criticism, personal criticism.  And it is… In the case of Matt Lauer, it’s vicious even still, and it’s coming from the upper echelons of NBC.  His only defender is Andy Lack, who’s the news division president who’s actually (they say) the guy on the side of the earpiece.  But NBC said, “No, no, no, no! Nobody was feeding Matt questions.”

Yeah, they’re leaving him out to dry.  He came up with that device of demanding Hillary coming clean on the emails on his own.  But imagine! His career in jeopardy because he dared pursue a line of inquiry in Hillary Clinton.  That is verboten.  So Levin’s right: There is no news.  What he means by “irrelevant,” he may be saying that, if they were as relevant as they used to be, they would have taken Trump out by now.  I mean, Trump is a target-rich environment, and, if they had the power and the influence they used to have, they would have taken him out.

Now, maybe so, but there’s another aspect to that.

Let me find that story here.  Here it is.  It’s a piece by Marc Thiessen at the Washington Post.  It’s a column.  “A recent…” He cites a poll.  “A recent NBC News poll found that just 11 percent of Americans say Clinton is honest and trustworthy. To put that in perspective, 14 percent of American voters believe in Bigfoot.”  So more people believe in Bigfoot than people believe Hillary is honest.

So you can say, “Yeah, they haven’t succeeded in taking Trump out.”  But the problem is they don’t understand why Trump’s where he is; they don’t understand why he’s attractive.  They’re starting to, and they’re getting worried about it.  The alternative is Hillary, and nobody likes her, either, and she certainly has no modicum of respect.  And 11% think she’s honest?  How does Hillary have the polling numbers she’s got if that happens to be true?

Ponder that as we take an obscene profit break.

RUSH:  You see how Matt Lauer is being treated, and you see how they’re starting now to dump on Jimmy Fallon.  Do you think the moderators for the upcoming presidential debates notice this?  You think they are sensing what happens to people who are honest and straightforward regarding Mrs. Clinton?