Libertarians: Gary Johnson Is a Fraud

RUSH: San Antonio. This is David.  Great to have you with us on the EIB Network.  Hello.

CALLER:  Yeah.  Thanks for having me on, Rush.  I want to say I’m a big fan.  You’re my daily dose of sanity in an insane world.  I’m a 34-year-old Millennial, I guess.  I’m about to finish my master’s degree in sociology, and I call myself a true Libertarian, but I don’t feel like anybody out there, whether in the university or political world, really represents me or even wants me, and especially not Gary Johnson.  I don’t know where he gets off calling himself a Libertarian.  To me he’s like a Green Party reject liberal that’s also an opportunist like —

RUSH:  — thank you.  Thank you.  I’m glad that you said that.  You’re exactly right about that.

CALLER:  Yeah, he seems, “Okay, there’s an opportunity, I’ll run as a Republican, nobody’s representing the Libertarians, I’ll run Libertarian.”  But, in actuality, he’s just — okay, legalized marijuana, but a Libertarian is for small government, and that’s not Gary Johnson.  The federal government, to me, has two jobs, foreign policy and national defense.  And that’s it.  Everything else should be left to the states.

RUSH:  And defending the Constitution, don’t forget that.

RUSH:  Well, Gary Johnson, all these people in there as spoilers.  They’re not really there to advance what you would call the Libertarian worldview or ideology or what have you.  They’re just in there as spoilers, and that’s why they’re treated with such curiosity, respect and acclaim and so forth because third parties are generally known to harm the Republican candidate’s presidential quest.

RUSH: Here is Walt in Aberdeen, South Dakota.  Walt, great to have you. Glad you waited out there.  How are you doing, sir?

CALLER:  Anyhow, I want to take on this theory that Gary Johnson is a Libertarian.  He is no more Libertarian than Bernie Sanders.  If you take a look at his stance on the cap and trade carbon tax initiative or the TPP, which really isn’t free trade, it’s more government regulation from outside our own federal government —

CALLER:  — and if you take a look at his stance on religious freedom, he’s more a freedom from religion than a freedom of religion guy.

CALLER:  It’s basically a flawed principle that he is in any way a representative of the Libertarian beliefs.

I don’t know what it feels like to knowingly go into a polling place and know that your vote is actually undermining what you want to accomplish.  I don’t understand it.  Take that back.  I understand it because I understand there are all types.  I understand there’s all kinds of human psyche, psychology motivation.  I just personally cannot relate to voting for a third-party candidate.  I’m not a protester by nature, so I don’t have that element.  A lot of people vote third-party to protest what they don’t like in the other two.

CALLER:  I will admit I have voted Libertarian in the past, like whenever they ran John McCain, I could not bring myself to vote for him.

CALLER:  I’m almost grateful that Libertarians picked Gary Johnson because he is such a poor Libertarian that a lot of —

RUSH:  Well, he’s polling better than any Libertarian has since any third-party guy since Perot.

CALLER:  I really think that that is coming from the Bernie Sanders crowd for what he believes in.  Because had the Libertarian —

RUSH:  You may have a point there, yeah.

CALLER:  Had the Libertarians managed to convince someone like Rand Paul, who I was a huge supporter of, to run for a Libertarian ticket, then I actually think that he would poll more votes from Trump than Gary Johnson is gonna manage to pull from Clinton, although Arizona does worry me.

RUSH:  In what sense? 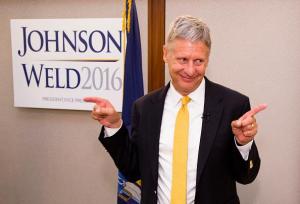 CALLER:  Well, and I am not accusing Trump of racism or bias against Hispanics or anything, but Gary Johnson’s attitude toward illegal immigration and not defending our borders, supposedly that’s being manipulated to pull a lot of what would be normally conservative Republican votes from Trump to Johnson in a normally conservative state.

RUSH:  You know, that may be, but I don’t think Gary Johnson’s pulling votes from Trump.  I think people are voting against Trump for their own reasons. He’s who you vote for if you don’t like Hillary and you can’t stomach Trump, okay, where do you go?  You don’t vote Jill Stein so you got out and you vote for Gary Johnson.  I don’t think it’s an affirmative vote for him.  I just think you have some people for whatever reason who won’t vote for Trump on the Republican side.  The Never Trumpers, we know they’re out there, and Gary Johnson just happens to be the receptacle you throw the trash that is your vote in.

CALLER:  Right.  Well, my whole thing is, you know, the anti-Trumpers I cannot stomach because they’re the ones that kept constantly berating me any time I said that I didn’t support a milquetoast Republican like the McCains or the Romneys.  And, you know, the Hillary voters I write off into three categories, you know, actually ignorant, willfully ignorant, or willfully evil.

RUSH:  Let me see.  Speaking of — you mentioned Romney.  I’ve got story here that Trump’s polling better than Romney in some poll here.  I’ll have to find here.  In the meantime, Walt thanks for the call.  I appreciate it.  You’re obviously more up to speed on Gary Johnson.  The only thing I know about him is he doesn’t know what Aleppo is or where it is.  I think I may have had found it here.  Walt, thanks very much.  I appreciate the call.