Trump Doesn’t Condescend to African-American Audiences Like Democrats Do

RUSH: Now, let’s go to the other side just for a second.  Let’s go to Trump Saturday in Detroit at the Great Faith Ministries International.  The CNN poll is out. It was taken September 1st through the 4th.  That means it covered Hillary and her invisibility and coughing spasms, and it also covered Trump — his Mexico trip and his trip to the black church in Detroit, the Great Faith Ministries International — and I think there’s subtle things. Even if the Drive-Bys are trying to shield and cover up what’s happening to Hillary, they’re not able to do so totally, and the contrast here is striking.  Here Trump…

TRUMP:  Becoming the nominee of the party of Abraham Lincoln — a lot of people don’t realize that: Abraham Lincoln, the great Abraham Lincoln was a Republican — has been the greatest honor of my life.  It is on his legacy that I hope to build the future of party. But more important, the future of the country and the community.  I believe we need a civil rights agenda for our time, one that ensures the rights to a great education — so important — and the right to live in safety and in peace and to have a really, really great job — a good-paying job, and one that you love to go to every morning. And that can happen.

RUSH:  I’m gonna tell you something, folks.  I don’t care what you think of Trump. Nobody on the Democrat side says that.  Not just to African-American voters. They don’t say it to hardly any minority.  They don’t tell ’em, “There’s a great job out there for you! There are great-paying jobs. There are jobs that you would love every morning, that you would get up and you can’t wait to get to.  That can happen.”  You don’t hear that kind of thing from the Democrat Party.

From the Democrat Party you hear how there’s no hope, that the deck’s stacked against you, because everybody hates you because you are a minority. The Republicans hate you, Big Business hates you, they don’t like you, they’re trying to kill you, they’re trying to stifle you, whatever. It is nothing but a scare Regime, scaremongering, fearmongering.

Did you notice also that Trump spoke to them as Trump?  What do I mean by that?  Well, let’s listen to how Hillary Clinton speaks when she goes to a black church.  March 4th, 2007, in Selma, at the First Baptist Church.

HILLARY:  Let us say with one voice the words of James Cleveland’s great freedom hymn, “I don’t feel no ways tired.  I come too far from where I started from.  Nobody told me that the road would be easy.  I don’t believe he brought me this far to leave me.”

RUSH:  Okay, so Hillary goes to a civil rights march, she goes to an African-American church and she starts speaking in the black dialect. (imitating Hillary) “I ain’t no ways tired.  I come too.”  Contrast that with Trump.  And Obama does the same thing.  Same place.  March 4th, 2004, Selma.

OBAMA:  This is the site of my conception.  I am the fruits of your labor.  I am the offspring of the move-ment.  So when people ask me whether I’ve been to Selma befo’, I tell ’em I’m coming home.

RUSH:  “I’ve been to Selma befo’.  I’m coming home.”  So these guys go out and they condescending to change their speaking manner, they affect this whatever, black dialect.  Trump is just out there speaking to them from his heart.  And he’s speaking substantively and seriously and upliftingly. These little things out there, hard to calculate, hard to track in polling data, but they are — this was reported on, by the way.

RUSH: Here’s Karen in Detroit.  It’s great to have you on the EIB Network.  I’m glad you waited. 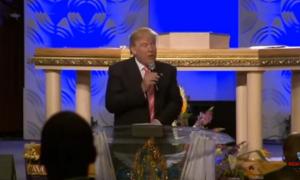 CALLER:  Can you hear me okay?

CALLER:  Okay.  I’m sorry.  I listened to and watched, I should say, the live feed from Trump’s visit to Detroit at the Great Faith Ministries church.

CALLER:  And he left soon after he spoke, and I decided I would watch the rest of the program, okay?  And when the bishop, Jackson, preached, I just want to say that midway through his message he said that his team asked the Trump advance team if he had any requirements or whatever. And the only question the Trump team said was, “Will you give Trump a fair shake,” or it might have been a fair chance, but it’s the same message anyway.  He said he didn’t ask about money, he didn’t ask about restrictions on questions, he only wanted a fair shake.  And to me that spoke volumes.  But you won’t see that on the media.

The Clinton way, they pick the people that are gonna ask the questions. They then give those people the questions so that the answers are foretold and already know.  Needless to say, Trump also didn’t tell ’em he wanted only brown M&Ms, you know, in the bowl in the greenroom.  I did not know that, Karen.  I appreciate the call.