Fox on Your Host and Kaepernick

RUSH: Now we go to the audio sound bites.  Once again, your host being used as material for other guests to react to and bounce off of.  Fox News this morning, the America’s Newsroom show, Martha MacCallum, played a couple of clips of me from yesterday on the Colin Kaepernick caper, and she had a couple of guests and their reactions.  Here’s how it started.

MACCALLUM:  Rush Limbaugh unloaded on all of that yesterday.  Here he is. 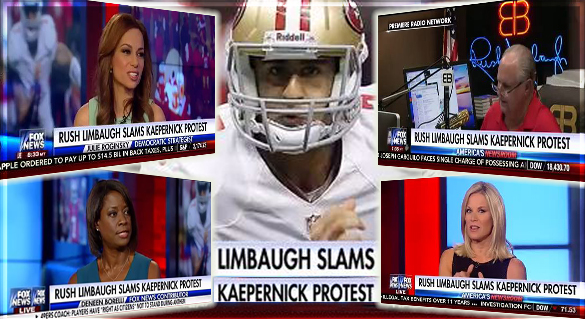 RUSH:  So they went to Julie Roginsky.  She is one of the Fox analysts from the left, and she was asked, “Julie, what do you think of all this?”

ROGINSKY:  I stand up for the national anthem because I believe in this country and I believe in what the anthem stands for.  If you don’t, then don’t be a hypocrite.  I get it.  Don’t stand for the anthem if that’s what you feel.  And you know, I may not agree with him, but I’ll defend to the death his right to do what he wants to do, which is a free speech issue. If he doesn’t want to stand up for the anthem, don’t be a hypocrite.

RUSH:  Martha MacCallum next said, “It seems if you will protest, you should stand up for the anthem.  You should be saying, ‘I live in a country that allows me to speak my mind, and I’m glad that I live in one of the countries in the world where I can pledge allegiance to my flag, and then in an interview in the locker room I can say what I think about what’s going on in my country currently.'”

BORELLI:  I do agree with Rush Limbaugh.  I also think there’s significant political correctness within the NFL.  Think about when the players in Dallas wanted to honor the slain police officers with a decal on their helmets, and they were denied that right to do so.  There is a huge dynamic here, and I think the NFL really needs to impose a code of policy, code of conduct for the players to stand for the national anthem.

RUSH:  You know, that is an interesting point.  I’ve heard a bunch of coaches.  The coaches have a really, really fine line they have to walk here.  They need their players.  The coaches are nothing without the players performing, and they know it.  The league needs the players.  Nobody’s gonna pay to watch the owners have meetings about anything.  The players are it and that puts a responsibility on the players’ shoulders.  They are the product.  And you’ve gotta be very careful how you present that product.

But, see, the league has its own culpability here.  The league opened the door to all of this stuff, you could say.  National Hispanic Week, National Hispanic Month and go all pink in the month of October for breast cancer support to show that — you know what I think about that?  That’s marketing.  That’s marketing disguised as a social conscience, but it’s marketing.  They’re trying to appeal to women.  It’s kind of base in its approach.  I don’t know how effective it is in converting women to the NFL.  They would know; I don’t.  It obviously works; they keep doing it.

Anyway, they’ve opened the door to this.  And when I hear coaches — I mean, the coaches tell these players what they can and can’t do all the time.  The league does, too.  The league has all kinds of rules.  In fact, folks, I have to tell you, the National Football League, you can’t read about it anymore without reading about suspensions, violations of this policy, violations of that policy.  Sports reporting in the National Football League has changed dramatically.  The coverage is not exclusively about the athleticism or the game, what happens on the field, training camp or what have you.

It’s now a police blotter in addition to all that.  And what’s screwy about it is the media seems to relish this aspect.  The media relishes when players get suspended, the media relishes all this.  It’s the oddest thing.  So many people depend on the success of this league for their living, for their reason to exist, for their financial wherewithal, whatever, and all the people engaged in trying to — well, I don’t know “trying” — an activity which could lead to real harm.  It’s the most amazing thing to me to watch certain aspects of this.

But the coach, you know, Kaepernick sits down and says what he says and the coach, “Well, I can’t tell the kid what to do. I can’t tell the kid what to say. Freedom of speech, not for me to say.”  Well, it is in every other aspect of the kid’s life.  You tell him what time he’s gotta be in bed on road trips and during training camp.  The league has all kinds of rules of what these guys can’t eat or drink.  And, boy, you better pray you don’t go out and get a weight loss product that’s got a banned substance in it as a tiny little ingredient.  You can be suspended for four games not even knowing what you did.  There are all kinds of rules that players have to abide by or they can face suspension and fines.

I mean, Tom Coughlin had a rule, former coach of the Giants, if you had a nine a.m. meeting, if the offense, if the team meetings are at nine a.m., they actually started at 8:55.  If you showed up at nine a.m., you were five minutes late and got fined.  So a coach can do that, but, no, “I can’t tell the kid what to do. It’s not my right to tell a kid what his rights are.”  And now we’re off into this tangential discussion of rights.

People talking about rights not even knowing what they are or where they come from.  “I gotta right to do this, dude, I gotta a right, man.”  You don’t even know what you’re talking about, but everybody, “I’m not gonna infringe on anybody’s rights.  If he thinks he’s got the right to go and sit on his ass during the national anthem it’s not for me to say he can’t. No way, not gonna go anywhere near it.”

So standing up for the country, nobody wants to go there.  Well, I shouldn’t say nobody.  Look, there’s some players, like Jerry Rice.  Jerry Rice, All Lives Matter, and Kaepernick should stand for the anthem.  Jerry Rice, one of the greatest San Francisco 49ers ever.  All Lives Matter.  And Jerry Rice is not — let’s just say it’s big for Jerry Rice to say that.  He’s not alone.

But the media is trying to encourage other players to follow in Kaepernick ‘s footsteps, ’cause it would be controversial, cool, standing up to authority, all the things they supposedly like.

Then the T-shirts the players are wearing, “I can’t breathe,” which is a misinformation piece on the death of Eric Garner.  This is the kid in New York City that was selling black market cigarettes because the tobacco tax in New York is so high that the black market for cigarettes is thriving.  A guy could make a living doing it.

Anyway, so the players can do that. They can say “hands up, don’t shoot,” they can sit down during the anthem wear these “I can’t breathe” T-shirts, but the Dallas Cowboys asked if they could put a decal on their helmets this season honoring five Dallas police officers who were murdered, and the league said, “No, nope, you can’t do it.”

ROGINSKY:  I can’t believe I’m saying Rush Limbaugh is right about that.  If the NFL is gonna have a policy of allowing people to honor one component and not another, that’s wrong.  The NFL should have a consistent policy.  The anthem to me is a little different, though.  The anthem to me is a very personal thing.  And if you believe in what the anthem stands for, as we do, we stand for the anthem.  If you don’t, why be a hypocrite?  Don’t stand.

RUSH:  Gotta take a break, folks, before they start yelling at me.