Drive-Bys Disgusted by the Weiner Story — Because Trump Talked About It!

If you listen to the Drive-By Media, the biggest scandal about the Huma Weiner and the Carlos Danger contretemps is that Trump is using it to question Hillary’s judgment.  Yeah, they’re trying to build a wall around Huma Weiner.  “It’s just unconscionable how Donald Trump would seek to exploit the pain and suffering of a couple in their private moments.”  Private moments?  Private moments?  We have a woman who is advising Hillary — by the way, folks, you should know something.  I have it on the highest authority that there are people within the Hillary camp starting to get worried about Huma in terms of the advice that she’s giving Hillary.

People are looking at Huma’s life, and a lot of it doesn’t seem to make sense, and they’re wondering, what in the hell is she advising Hillary to do?  In other words, there may be trouble in paradise.  I do not know to what degree, and I don’t know how serious it is, but there are people who are concerned about this.  Then of course there are the national security implications.

It kind of illustrates what telling the truth about a circumstance looks like now.  How dangerous it is to tell the truth and what it looks like when you do.  We’ve had so many years where spin, buzz, and PR have substituted for reality that when anybody dares to actually go there, it seems so odd, it seems so coarse, it seems so insensitive.  And yet what Trump said is true.  Huma holds the keys to the kingdom.  That’s why who Huma Abedin’s mother is is relevant, to the extent that Huma works with her mother and that her mother is a big believer in Sharia.  I mean, these are all legitimate questions.

We’re talking about electing the person president of the United States.  I thought all vetting was required.  Of course, we’ve learned that there’s no such thing when it comes to Democrat candidates.  We didn’t vet Obama. We did. The Drive-Bys did not.  And the same situation involving Hillary.  Now, after all this, the woman that Carlos Danger was sexting in his latest escapades, a Trump supporter and even a staunch NRA supporter.  But she could have just as easily been a KGB agent.  And who knows who else Weiner has been interacting with, and who knows what their connections are.

These are all legitimate concerns, given who Huma advises.  Blackmail vulnerability, all of these things, it would be irresponsible not to consider this.  How do we know, for example, that Carlos Danger wasn’t duped into doing this in the first place, blackmail, ’cause this doesn’t make any sense.

How stupid is this?  You’re caught once doing this, humiliated, you lose your job.  Because you’re a Democrat you’re able to come back and almost get elected mayor of New York. Then that blows up and you revert to the same behavior that nearly destroyed your career the first time around.

Who is that stupid?  Or who is that arrogant?  This is the kind of setup the KGB and other foreign intelligence agencies dream about.  Even though Huma has cut the cord from Carlos Danger, it still has people’s antennae rising.

RUSH: This is Rob in Houston.  Rob, you are next on the EIB Network.  Hello, sir.

RUSH:  And great to have you here. 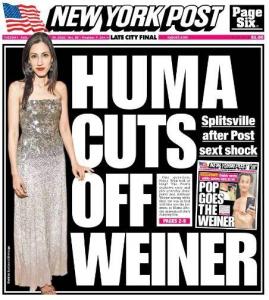 CALLER:  — getting caught with these kinds of issues going on that could be documented, that —

“Yeah, well, Rush, if that’s true, then how did it end up that Weiner was doing all that with the kid.”  Hillary can’t be blamed for what she doesn’t know.  Well, Huma can leave the child with him because Huma knows that Hillary is a good friend, and there’s nobody that has done more for children than Hillary Clinton, there’s nobody that cares more for children than Hillary Clinton.  It is a legitimate question.  I, of course, am spoofing here, but here you got Weiner as Carlos Danger, acknowledging that he knows he’s going to be discovered, and he’s texting out these crazy photos with the baby there.

Where’s the mom?  Why is the mom leaving the kid with the known sexter?  It is a legitimate question.  You know damn well Child Protective Services would be in there, Major Crimes unit would be in there, who knows who all would be in there, trying to claim that the child was in an unsafe environment.  It’s a good question, Rob, really is.