RUSH:  Okay.  So Huma Abedin has announced that she is separating from the husband, Carlos Danger.  Carlos Danger tweeting out photos of himself with a swollen crotch with a child next to him.  So Huma says that’s enough. Did Huma Abedin Weiner really not know she had a deviant taking care of her child?  She may not know what’s best for herself, but she apparently knows what’s best for Hillary Clinton.  I mean, she’s in line, she’s chief aide now.  She’s presumably gonna be Hillary’s chief of staff.  But she has not been chief of her husband’s staff, obviously.

RUSH: Now, this always happens.  I just told you what was gonna happen when we come out of the break, all of these sound bites, and Cookie assures me it could have been 20 sound bites with the Drive-Bys reacting to me laughing on this program last week at the notion that Trump may have flip-flopped on immigration, amnesty, what have you.

And then during the break I got a couple of sound bites from CNN about Huma Abedin Danger now splitting from her husband Anthony Carlos Danger Weiner.  It’s interesting to note this, too.  Did Hillary try to talk her into staying?  Hillary didn’t do this.  Hillary hung in there.  But Huma has had enough.  Huma has chosen Hillary over Weiner.  Obviously in more ways than one.

I mean, the idea, the possibility of becoming Hillary’s chief of staff is obviously a very attractive thing, particularly when Huma has not been chief of her husband’s staff, obviously, for quite a while.  But the contrast here, no bimbo eruption unit here.  Huma Abedin not arising and trying to find out who these women are texting with her husband and then trying to destroy them.  That’s Hillary’s MO.  But Huma, guess she just doesn’t want to deal with it, doesn’t want to put up with it.  And they’re very sad in the Drive-By Media.  It’s almost fly the flag at half mast day.  Jeff Zeleny, CNN, just a moment ago.

ZELENY:  He is more than a spouse. He is a central player, of course, to Huma Abedin, though. But one cannot understate the importance of her to the Hillary Clinton campaign. There is no one who is —

ZELENY:  — at the candidate’s right hand more often than Huma Abedin. This really is a personal matter, not a campaign matter; but it is really angering some people on the campaign I have spoken to this morning when this New York Post report came out. They were hoping that he would not embarrass this campaign, embarrass Huma. But that is what has happened here. But, you know, there are so many aides and so many people who work on a campaign; but, again, no one closer in every respect to Secretary Clinton than Huma Abedin. One can only imagine the personal conversations that Huma Abedin is having with Hillary Clinton

RUSH:  I wonder if Jeff Zeleny there understands what he really just said when he says, “One can only imagine the personal conversations that” — what does Huma have in common with Hillary?  What in the world could this possibly be about?  It’s obvious.  Horndog husbands.  So they all know, they all obviously know, but Huma has chosen a different route.  She’s distancing herself and separating herself.  I guess she figured there’s no future in the last name being Weiner, whereas Hillary knew there was a future with the last name being Clinton.  Here is Brian Stelter, the media whiz at CNN.

STELTER:  It’s perplexing, it’s mystifying, and now just downright sad.  People have had fun with this story, they’ve exploited this story.  The New York Post, among others, certainly have. But now to have a child involved, have a child on the cover of the New York Post with his father in bed with him taking lewd photos, that is just sad.

RUSH:  Well, who made it possible?  Didn’t Weiner make it possible?  Anyway, you can expect a lot more hand-wringing. You can expect a lot more sorrow. You can expect much sadness in the days ahead as this story continues to bounce around and reverberate through the presidential campaign.  And, of course, what will it mean for Hillary, what will it mean for her campaign, and what will Trump do with it?  Yes, everybody will be very, very concerned at whatever tactless, tasteless thing Trump tries to do with it, this in their point of view.

RUSH: Douglas, Canton, Ohio, great to have you, glad you waited.  Hello, sir.

CALLER:  Yeah.  You know this thing about Huma’s marriage problems?

CALLER:  That kind of thing, as far as the pay-for-play and all that stuff. 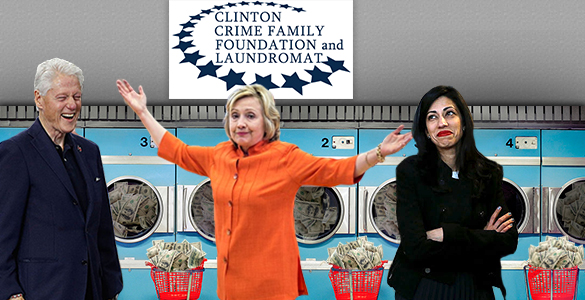 CALLER:  I think that they’re gonna use Huma’s marriage problems to keep the news media and anybody else away from her because they have to feel sorry for her.

CALLER:  “She’s going through so much in her marriage that you just can’t bother her.”

RUSH:  I can understand your thinking on that.  So you think that Weiner took the pictures in his bulging package underwear with the child next to him as part of the trick, and then tweeted — whatever he did, texted it — out to this supposedly brunette bombshell that he’s sexting with, and that all of this…? Weiner did this purposely?

CALLER:  I don’t put anything past Hillary, okay?

CALLER:  And Hillary’s in charge.

CALLER:  You know, I just heard on the news that Trump said that Huma is probably better off without Weiner anyway.  They’re gonna use that against Trump.

RUSH:  Why would they use that against Trump?

CALLER:  They will.  They’ll use it against Trump.

RUSH:  Well, I mean, Huma’s obviously decided it, too.  Huma’s decided she’s better off without Weiner.  So Trump comes along and says it’s probably true. Why could they get him in trouble?

CALLER:  Because they’ll blame him for saying it. “Well, you’re trying to cause more trouble in their marriage.”

RUSH:  Oh, in other words, it’s none of his business —

RUSH:  Okay.  Douglas, I’m glad you called out there.  I’m happy you’re thinking about things.  Obviously, Huma wants to be Hillary’s chief of staff. No question about that.  She obviously has not been chief of her husband’s staff.  That we can make book on.  She’s out there strolling the sidewalk with Hillary.  You seen this picture on Drudge?  They’re dressed like twins!  They’ve got on white slacks, and they got the turquoise tops, and Chelsea is in the background like she doesn’t matter, walking behind them. 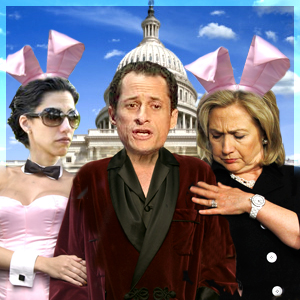 It looks like they’re window shopping or something. I don’t know what.  Look, I don’t think this is a trumped-up thing.  ‘Cause I think Weiner is this arrogant.  I think Weiner is entirely capable of this kind of risky behavior.  But there is a story out there that is not going to be told now, about Huma and her mother and who her mother is, the magazine that her mother edits and what her mother believes and how it could be embarrassing to Hillary.

Because Hillary has included Huma’s mom in a number of appearances that Hillary’s made in the Middle East.  And the upshot of it is that Huma’s mom is a full believer in Sharia and a full believer that a woman’s — a wife’s — primary duty is to give her husband sex when he wants it.  There’s nothing feminist about Huma’s mom.  I mean, it’s a Paul Sperry story.  He’s done a lot of research on Sharia, like Andy McCarthy has.  And his story was published yesterday in the New York Post.  “Huma Abedin’s Mom Linked to Shocking Anti-Women Book.”

And if Sperry is right about this, then Huma’s mom is full-fledged Muslim Sharia, in which women are second-class citizens.  Now, you may, so what?  Well, it doesn’t jibe with the Hillary.  Hillary doesn’t believe any of that.  Hillary certainly doesn’t believe that the role of a wife is to give her husband sex whenever he wants it.  The wife’s job is to deny it, in Hillary’s world, whenever he wants it — and beat him up for asking!

So it’s a strange connection out there, a strange association.  And then that gives rise to what was Huma doing with Weiner in the first place?  What was that all about?  What is there in common?  And that’s dangerous place to go. When you start poking around in people’s relationships, that’s a minefield, ’cause who can explain love? I mean, you don’t even want to go there.  Certainly not… (interruption) It could be as simple as the pictures?  (interruption) All right.  (interruption) Okay.  (interruption) So you think it could be just the package, the package could be the deal?