Hillary Yuks It Up About Emails, But Trump’s Going After Her on It

RUSH:  It’s Suzanne, Lake Charles, Louisiana.  Great to have you with us on the EIB Network.  Hello.

CALLER:  I’ve been listening to you since I was a freshman back in college since 1988.

RUSH:  People stick with this show.  This is the amazing thing about it.  I’m so thankful, grateful to you.  Thank you.

CALLER:  I used to have a bumper sticker that said: “Rush is Right.”

CALLER:  Yes, you are.  Listen, I wanted to comment on Hillary screeching last night on Jimmy Kimmel.  He asked her about, you know, the 30,000 plus emails and then he said, you know, what’s with the now 15,000 emails?  And she made such a slight about that. She said, “You know, what’s a few more?”  And I think that that was like her screeching when she was in front of that congressional hearing and saying, “What difference does it make?”  You know, when she passes that off —

RUSH:  Suzanne, hang on.  Grab audio sound bite number 12.  Here is the exchange on Jimmy Kimmel Live last night that she is talking about.

HILLARY:  My emails are so boring.

KIMMEL:  So, at the end, you — you’re not concerned that there’s gonna be something that —

KIMMEL:  — Donald Trump is able to use against you, that the Republicans, that comes in at the last second?

HILLARY:  But he makes up stuff to use against me.  So if he would stick with reality, I wouldn’t have a worry in the world.

CALLER:  That’s exactly right.  And I think that it’s so insulting to the intelligence of the United States citizens that she can just slight that off, 15,000 emails, Rush.

RUSH:  Look, my question about this is, where did these come from?  I mean, we’ve been told all this time that every email’s accounted for. She deleted 30,000, they found 33,000, they’ve gone through ’em, and yet here’s 15,000 that nobody knew existed.  Why was the investigation closed if they still had —

RUSH:  Yeah, the emails are from people she wrote to.  Emails that were thought to be gone, deleted, in the ether.  These are emails to people that she wrote to, emails she sent.  Not hard to figure out. 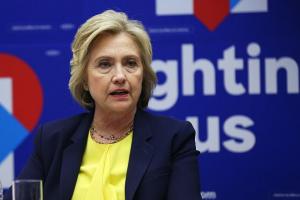 So the Drive-Bys are filled with this story: “New Docs Show Clinton Foundation Donors Sought Access to State Department.”  And the Drive-Bys, like at USA Today, say, “Wait a minute, wait a minute, now, access, that’s not favors.  Anybody can ask for access, but that doesn’t mean they’re gonna get favors.”  And of course the favor is access.  The favor is access.  Once you have the access, why, the rest is smooth sailing.  So just, again, to remind you how it happened, you call the Clinton Foundation, you call the State Department, one of two things is gonna happen.

RUSH:  See, that’s how it works.  You call the secretary of defense and you punch the option there for special help, and you get over to the foundation.  And depending how much money you want to talk about donating to the foundation, why, then you get your access.  That’s how we imagine it working.

So Trump decided to weigh in on this.  This is not getting near the coverage in the media that you would think it would get, but nevertheless Trump is in Akron, Ohio, last night talking about all of this State Department pay-for-play, which has been revealed in these emails.  I mean, it’s been revealed here that the way you get to Hillary Clinton was to call the foundation and ask for Cheryl Mills and, depending on the amount of money you wanted to donate, Mills would call over Huma Abedin, and Huma Abedin would take these people to Hillary. And Hillary would determine who she’s gonna speak to based on how much money they were offering to donate, in large part.

That’s what pay-for-play is.  You pay and Hillary will do something you want done.  That’s why, you know, the grand potentate of Bahrain, $32 million, to the Clinton Crime Family Foundation, and that’s obviously investing for future consideration.  Here’s Trump.

TRUMP:  After the FBI and Department of Justice white-washed Hillary Clinton’s email crimes, they certainly cannot be trusted to quickly or impartially investigate Hillary Clinton’s new crimes, which happen all the time.

RUSH:  Folks, this really is serious stuff.  I think with the Clintons and with Big Government in general, I think people have become numb.  I mean, you hear about this, let’s take pay-for-play.  Really, what is it?  What it is is what people think happens in Washington every day.  This pay-for-play is what lobbying is.  People think that it’s already happening.

An average citizen that does not have access to this kind of money does not have access to these kinds of influential people like a lobbyist. They just have to sit out there and hope and pray that the elected official says what they said they were gonna do when they were campaigning for office.  But, in the meantime, world leaders, foreign companies, foreign governments are calling the Clintons and asking how they can get consideration.  And the answer is send money to our foundation, and, as an added benefit, if you hire Bill Clinton at 300 grand to do a speech, we will really give you consideration.

This is really what is happening, and it is hitting democracy in the heart.  It’s making American policy subject to payment.  And Hillary Clinton is accepting all of this money, Bill Clinton accepting all of this money from influential people, and, by the way, I’m now starting to hear this said by other people.  They’re not sending $30 million here, $15 million there.  They’re not sending them this money ’cause they like them.  It’s not because the Clintons are special people and they really want to hang around ’em. 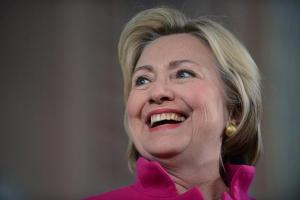 I think if you’re really serious about this, impeach her. If this really is criminal activity or borders on it, impeach her.  I mean, I don’t mind a call for special prosecutor, so forth, but what we’re really relying on here is voters to understand how serious this is and have people currently inclined to vote for Hillary to get so mad, so righteously indignant over what she’s done that they abandon her, and that isn’t gonna happen without the media just investigating her upside down and inside out.

And they’re not gonna do that.  And she knows it, and Bill Clinton knows it, and a lot of other people know it, so they just chalk it up to, “Well, this is what has become of our government.  This is what has become.”  Some people are enraged by it, and they’re out there supporting Trump.  But the Never Trumpers, they balance this against Trump and they say, “You know, give me the play-for-play.  I’d rather have Hillary Clinton or pay-for-play in office than Donald Trump.”  And that just puzzles people even more.