RUSH: This presidential campaign is unlike anything anybody has seen, and it’s really hard to handicap.  I also saw something else. I think this was Friday.  As I was flying back home from my two-day business trip, I think it was Friday.  Dana Perino — I was telling Mr. Snerdley, did you see this?  You didn’t see.  It was on The Five, I think.  Or it might have been a show on Fox where she he was a guest analyst or commentator.  But she delivered a commentary or she made a statement that she just looked really in pain.

She looked at the camera said (paraphrasing), “I will never lie to you.  I can’t lie to you now.”  And you could tell she was uncomfortable with it because the assumption was that her audience doesn’t want to hear this.  I mean, she’s on Fox News.  And the assumption in her heart I’m sure was, the audience wants to hear every day, “These polls are wrong, you don’t fall for it, you keep your chin up, keep thinking positive, we’re gonna show everybody.”  She couldn’t do that anymore, she said.  The polls are right.  It’s not looking good.

Well, there is movement in the polls, folks.  And even old Nate Silver, the FiveThirtyEight, is saying this thing’s not over yet.  Trump is beginning to trend in the right direction.  Other poll analysts are pointing this out as well but then asking, is it too late for this?  Is there enough time, can Trump continue this trend, can Trump continue to tighten the race?

And then there are a couple of polls that show Trump up. That new LA Times poll done with USC has Trump up, after being down by three.  This is the poll the week of the Democrat convention Trump was up seven. Lost that lead through the Democrat convention and a week and a half after. Then it tied, then Hillary went ahead by three in that poll.  Now Trump’s back up by half point. 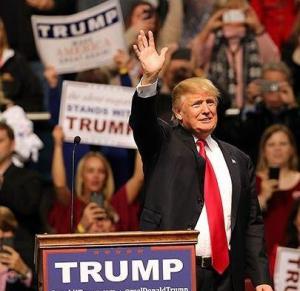 Hillary’s not going on TV. She’s not doing any campaign appearances, but it is fascinating, they’re almost panicked in the Hillary camp about fundraising.  They’re sending out fundraising letters as though they’re in the middle of a crisis.  It’s weird.  But you know what it’s clear, folks?  You’ve got the Democrats, there’s a story in the Washington Post, Hillary’s already starting to work on her presidential agenda.  Hillary’s donors and Hillary’s campaign advisers and Hillary’s potential cabinet members are all getting together and starting to plan out the presidential agenda.

In their minds, it’s over.  They have it won, and the way they’re gonna make sure it stays won is Hillary is gonna hibernate.  She’s not gonna show up because they know the more she shows up, the greater the chance are her poll numbers will decline. So she’s not gonna do press conferences. She’s not gonna do rallies. She doesn’t have to.  The media is her campaign.

The media destroys Donald Trump for her every day for free.  She doesn’t have to spend any money.  Of course, she’s going to, she is, and she’s raising money, but the media is her campaign.  The New York Times, ABC, CBS, NBC, something that I pointed out here weeks ago, Hillary doesn’t have to do anything.  Her campaign is the American mainstream media.

People continue to ask the question, they continue to hope that electric crowds and large crowds, at every rally, every rally, if Trump goes to a 20,000-seat venue, it fills, 10,000, it fills.  And there are people on the outside trying to get in.  And yet none of that seems reflective in the polls, although it is.  Trump’s numbers, his support numbers are made up of those people.

The only way to explain this — well, not the only way.  The best way to explain it is that you look at 2012, the same thing was happening with Romney, particularly in the final week.  Romney, I mean, the crowds were going bonkers. They were humongous, indoor, outdoor, and everybody said, “There’s something happening here, there is something going on.  The polls are not catching this,” and it didn’t mean anything.  Romney lost by a solid six, close to it, exactly what most of the polls said would happen. 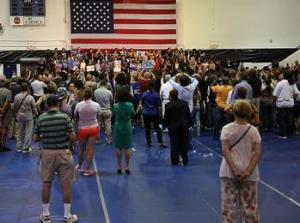 Now, the NFL’s attracting 50, 75,000 people seemingly to every game, every week.  And yet bowling is bigger, because you never see it.  It doesn’t generate crowds in those numbers at venues.  But the percentages of people that show up to an event are minuscule compared to the overall population.  And that’s why it’s called anecdotal.  There’s nothing scientific in projecting — you don’t know how many of those 20,000 at a Trump rally are actually gonna vote, you don’t know how many are gonna vote for him, you don’t know any of that.  All you know is the size.