Trump Gave a Great Speech on Race and Democrats, But Will Anyone See It?

That’s all well and good, that’s fine and dandy, except Trump gave a good speech last night in Milwaukee.  He said some things that need to be said.  But by announcing this campaign change eight hours later, he gave the media every excuse in the world to ignore covering his speech, and they have ignored it.  They’ve spent the whole day theorizing, discussing, analyzing whatever these campaign changes mean in terms of the stability and the strength of the Trump operation.

So since a lot of what Trump said hasn’t been given a lot of attention, I want you to hear some. We’re gonna start with just a few of these sound bites to give you a flavor.  It was a teleprompter speech.  Among those people that heard it, it was heralded, it was on point.  It was fearless and it tackled some issues that many Republicans ought to be tackling but don’t.  So let’s get started with some of the bites.

TRUMP:  Law and order must be restored.  The main victims of these riots are law-abiding African-American citizens living in these neighborhoods.  It’s their job, it’s their homes, it’s their schools and communities which will suffer the most as a result.  There’s no compassion in tolerating lawless conduct.  (cheers) Crime and violence is an attack on the poor and will never be accepted in a Trump administration. The narrative has been pushed aggressively for years, and now, by our current administration and pushed by my opponent, Hillary Clinton — (crowd boos) — you know is a totally false one.  The problem in our poorest communities is not that there are too many police.  The problem is that there are not enough police.

RUSH:  See what I mean.  Anybody else even getting anywhere close to saying that other than people talking about it on TV where of course these things are never solved — ahem — that speech was given just 45 minutes north of Milwaukee.  I mean, he may as well have been in the backyard.  Here is the next one.

TRUMP:  Those peddling the narrative of cops as a racist force in our society, a narrative supported with a nod by my opponent, share directly in the responsibility for the unrest in Milwaukee and many other places within our country.  They have fostered the dangerous anti-police atmosphere in America.  Every time we rush to judgment with false facts and narratives, whether in Ferguson or in Baltimore, and foment further unrest, we do a direct disservice to poor African-American residents who are hurt by the high crime in their community.  The war on our police must end, and it must end now.  (applause)  (Crowd chanting: Trump, Trump, Trump).

RUSH:  Now, look.  Look, look, look, look.  I know, I know that the Trumpster needs some practice reading the prompter.  But this is still pretty powerful stuff.  Nobody else is saying this and to have it said in the presidential campaign is very, very powerful stuff.  But, again, they undermine themselves by announcing this campaign switchup the very morning this should have been what anybody was talking about on the morning news shows.  But it wasn’t.  The media didn’t want to talk about this, as you’ll hear in just a moment.  One more Trump sound bite here from, again, West Bend, Wisconsin, just 45 minutes outside of Milwaukee.

TRUMP:  Hillary Clinton-backed policies are responsible for the problems in the inner cities today. The Democratic Party as failed and betrayed the African-American community.  Democratic crime policies, education policies, and economic policies have produced only more crime, more broken homes, and more poverty.  I’m running to offer you a much better future.  The Democratic Party has taken the votes of African-Americans for granted.  They’ve just assumed they’ll get your support and done nothing in return for it.

RUSH:  Right damn on.  That is exactly right.  For 50 years nothing but carrots and promises, and not one bit of progress, not real.  Again, just good intentions.  The Democrats have done a great job of scaring African-Americans into thinking the Republicans are — take your pick — not helpful, do not care about them, whatever.  But Trump called ’em out. 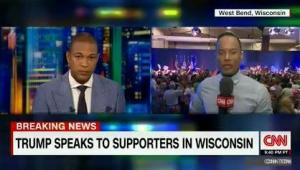 CARROLL:  There’s something that’s very striking to me here in Washington County where we are now, Don.  This is a community that is overwhelming white.  I mean, when you look at their recent census report, I would say some 96% of the people who live in this county are white.  Only about 1% are African-American.

RUSH:  Okay.  So after the speech, Don Lemon goes to the African-American reporter Jason Carroll to get the spin that they would use and that became the spin that Trump gave a speech to a white crowd. He copped out. He didn’t take anybody on. He was in the safety of a white crowd, big deal.

Next up was Van Jones.  Now, when you listen to Van Jones, if you know how to listen to this guy as a communist, slash, progressive. I mean, he’s an admitted communist, it’s why Obama threw him out of the Regime.  If he hadn’t admitted it, he’d still be in the Regime, but they threw him out.  And you can hear trepidation.  You can hear the anger, especially the link that Trump had between illegal immigration and African-American poverty. 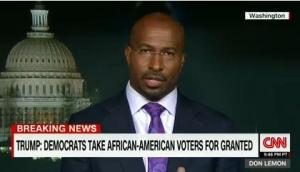 Because they already take the African-Americans for granted.  They don’t think African-Americans are ever gonna abandon ’em so they can treat ’em like nothing and go focus on Latinos.  Trump said all that.  Van Jones (impression): “You can’t say that! That’s divisive! You can’t say it.”  Then later Don Lemon brings on Kellyanne Conway, and he badgers her in a demeaning tone here, and… Well, here, just listen ’cause time is at a premium now.

CONWAY:  He didn’t say that.

LEMON:  I didn’t hear him mention any other group but African-Americans and crime.

LEMON: Did you hear him mention any other group besides African-Americans?

CONWAY:  What I heard him do tonight, which is incredibly important, is answer the call of all the complainers that he’s never —

LEMON:  You can say that, Kellyanne, but I want you to answer my question first: Did you hear him mention any other group besides African-Americans when it comes to crime, in this particular speech?

CONWAY:  What I heard of him say is that —

LEMON:  Yes or no, Kellyanne!

CONWAY: But why are you badgering me?

LEMON:  I’m not badgering you! 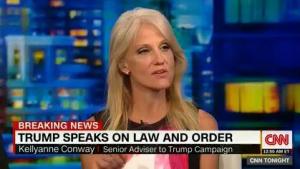 LEMON:  I’m trying to get a straight answer out from you —

CONWAY:  You are badgering me.

LEMON:  — and then you can go on and answer the question. You’re not answering my —

CONWAY:  You allowed three people to criticize his speech.

CONWAY:  People who want to talk about his style and his this and his that don’t want to give him his due.  They’re going to continue to insult him, lie about him if they want.  But there are people out there listening to his speeches.  He’s bringing the message directly to them through all the noise and through all the silence, and they will hear him.

RUSH:  So they think that Trump was only attacking African-Americans when it came to crime.  “Why didn’t he talk about Latino crime? Why didn’t he talk about white crime and so forth?”  Well, what was on the table?  There are actual events here that are being discussed!  Anyway, they were upset by it.  This speech turns some of these people on the left upside down. And they went and made this announcement of the campaign change, and nobody today even knows any of this happened.