Notes from My Trump Stack

RUSH: Okay, from the Trump Stack today.  First off, the Washington Examiner:  “Always-Correct Election Forecast Model Predicts Trump Win 51-48.”  Now, I think this is the last — there might be two.  There might be two polls out there that show Trump either in the lead or tied.  Oh, there’s a third.  A guy has written an app.  Try this.  I forget the man’s name.  Doesn’t matter.  It is not the focal point of the story.  USA Today had the story about a guy who wrote an app for your iPhone, your phone, your iPad, and this app is supposed to be an accurate predictor of who wins.

I don’t know how that can be because I don’t know how he knows who’s buying the app.  I don’t know how any of ’em know.  But USA Today did a big story on this app showing that Trump is much, much stronger than in all of the professional polls.  What I found interesting about it was why would USA Today push this unless they’re trying to mock it and make fun of it, which they didn’t appear to be doing.  It appeared they were trying to do maybe a little puff piece on the software writer, the app developer here.  Damn it, I wish I — it was Saturday I think I saw it.  And I don’t think I printed it out or I would tell you the name of the app.  I’ll see if I can find it.

And then there’s this.  But that’s grasping at straws, is it not, to go out and find some guy who’s written an app that shows Trump as winning. I don’t think that’s what USA Today was doing, is highlighting the ways in which traditional pollsters now have competition.  But this is Paul Bedard in the Washington Examiner.

If this model showed Hillary winning, it would be the top story in the country, but it doesn’t, so it’s relegated to the Washington Examiner.  Now, it says also here: “However, in an unusual move, Abramowitz is throwing his own model under the bus and suggesting that Clinton will win because Trump is so different from past presidential candidates and has such high unfavorability ratings that his election forecast basics can’t be trusted.”

Ah, that’s more like it.  You get a guy that produces a poll that says Trump’s gonna win and the pollster has to throw it out because Trump is so odd, because Trump is so unique that you can’t cast him as other Republicans are.  So this poll does not measure candidate characteristics.  It measures voting patterns by party.  But this guy throws his own poll out because he says Trump is such an oddball and such a strange bird that you really can’t use his model in polling this race.  Well, Trump is that.  Not in the way in which it sounds.  He’s a strange bird in the sense that he does not fit any of the political molds that traditional Republican or Democrats candidates fit into.

He’s doing everything in the world you shouldn’t do, and he’s doubling down on it.  He’s going to states that don’t have but 10 or 15 Republicans in ’em.  He’s now shifted his campaign from Crooked Hillary to the Crooked Media.  He has not focused on the issues that he was focusing on during the primaries.  He still has these raucous and highly popular, well-attended rallies.  But all the experts say, “You can’t extrapolate from that. You can’t say that big crowds equal votes.  You can’t say that excited crowds equal votes.  That’s anecdotal evidence, Rush.  You can’t compare that kind of evidence to actual polling data.”

So Trump continues to — he’s not spending any money.  You know, here’s a little interesting observation, by the way.  I’ll tell you a little secret.  You’ll know this once I remind you of it.  This time of year, every four years, rivals Christmas in terms of advertising sales for television and radio.  Political campaign spending is over the top.  It now reaches into the billions.  And in a presidential year, that spending goes on all year, and it intensifies from late August all the way through October.

The Clinton campaign says they know that.  They’re waiting ’cause they think that all of that money’s gonna be dumped into one massive, gigantic Trump attack on her.  They don’t know what about and they don’t know when.  Now, Hillary, she’s the raising her money, and she’s spending it, but the broadcast outlets are taking in less money this presidential year than any year they can remember, ’cause Trump’s not spending any.  And, believe me, you might not think it matters, but it does.  It matters that Trump can generate free media whenever he talks.  That ticks them off.

You know, they don’t want to cover him, but they have to.  But what I’ve noticed, they no longer go the whole rally.  They’ll maybe do 10 or 15 minutes, but they’ll bump out.  ‘Cause they’re not gonna give him any more free media, not like he got during the primaries.  And he’s not spending any yet.  So they’re down some money.  What impact that has on coverage, I don’t know.  I don’t think it would change much.  I’m not saying if Trump started buying a lot of advertising the media would go softer on him.  I don’t think that’s the case.

I’m just illustrating that this is an entirely different campaign, and there’s lots of scared people, a lot of them on the Republican side.  The very people — in fact, let me put this in perspective for you.  You know that there are many Republicans, you know that there are many conservatives, you know there are many Republican, slash, conservative think tanks, blog sites, that despise the Trumpster.  And they want Trump to lose, they want him to lose so bad, they want him to lose so big, but now they’re starting to ask themselves, “Well, if that really happens, what becomes of us?”

The thinking all along has been that Trump will destroy only himself, that Trump will lose only himself.  Now they’re beginning to wonder, wait a minute, is there a Trump movement beyond Trump?  Meaning, even after Trump loses, do the people supporting him still support what they support, believe what they believe, and are they still gonna be mad at the Republicans they’re mad at now?

But none of this fits the mold.  And I don’t offer this as an attempt to comfort concerned or worried feelings.  I’m just making the observation.  As I mentioned earlier, the Wall Street Journal has given Trump until Labor Day to get out of town.  Honest to God, the ultimatum for Trump to get out by Labor Day and turn this all over to Mike Pence.

They think that they’re gonna be heralded as a bunch of Nostradamuses. They think they’re gonna be heralded as the guys we should have listened to from the get-go, and the party will thus be theirs.  I think that’s what they think. I don’t know that they still think that. (chuckles) I think they’re worried now the party cease to might exist, if it’s as bad as the media wants you to think. But I think that was their original thought process, that Trump alone would be destroyed and they would be looked to as oracles.  (interruption)

“Oh, my God. We’re sorry that we ever got mad you.”  I mean, I think they’re probably thinking that was one of the benefits to opposing Trump.  I have no doubt.  Boston Herald: “Media Bias Could Wind Up Helping Donald Trump.” It’s my question from the earliest moments of the program today, speculating right here — asking, not answering, speculating and asking — is this so over the top, this media treatment of Trump? Is it so bad that it’s gonna cause its own backlash, that people are gonna say, “My God, nobody can be this bad! 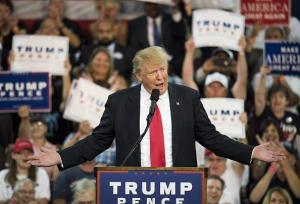 We’re way beyond media bias.  They are all-in.  The media is the Hillary Clinton campaign staff.  There’s not even a pretense of objectivity.  It’s so bad, the New York Times had to write a front-page story last weekend talking about how painful it is for real journalists for the first time in their careers out of a sense of duty to adopt an oppositional stance to a candidate.  They’ve never done that before, and since they’ve had to do it with Trump, it also looks like they’re pro-Hillary, and they’re so uncomfortable with this!

I mean, that’s Puke City, but they wrote it.

Victor Davis Hanson is quoted here: “His way of thinking is, if I take a battering ram and hit the door long enough, it doesn’t matter what I say, they’ll distort it, and eventually that will hit critical mass and people will turn on the media and Hillary.” He’s not thinking that’s gonna happen. He’s speculating that’s how it could happen — the backlash — if it does.  From TheHill.com:  “Clinton Up in Two Battleground States.”  Anyway, the pile-on news continues, and I’ve got all kinds of new audio sound bites out of Milwaukee, one particularly that I read to you that we now have the actual tape from.