RUSH:  All right, now, look, there’s a headline here on Fox News.  You got Hillary and Biden out there in Pennsylvania, and the headline:  “Clinton Attempts to Win Over the Working Class.”  Now, stop and think about that for a minute.  The working class has another name.  The working class is known as the little guy, and who is it that the Democrats have always been on the lookout for?  Well, the little guy.

Now, don’t misunderstand me.  I’m not one to grasp at straws.  It seems to me if you are in the midst of a huge landslide win over a flailing and failing Donald Trump, why do you not yet have your traditional core constituency wrapped up?  Now, I know that the Democrats made a conscious effort — this goes back to 2011.  It was in November and there was a guy, Thomas B. Edsall, used to write for the Washington Post, who became an advisor of sorts.  And he wrote how Obama was writing off the white working class as a constituency, as an electoral force.

RUSH: Audio sound bite time.  I want you to hear a little bit of Mrs. Clinton today.  She and Bite Me are in Scranton, Pennsylvania, and basically what Hillary’s saying America’s so great, everything out there is wonderful and fine, we just need to keep doing more of this and maybe improve it a little bit, and Trump’s not qualified. Trump is unfit.  Here’s how it sounds…

HILLARY:  The story of the Rodhams and the Bidens isn’t unique.  What’s unique is the country where those stories were written.  No matter what Donald Trump says, America is great and —

HILLARY: — and the American dream is big enough for everyone to share in its promise.

They really don’t know how to do it ’cause they don’t believe this.

They don’t go out and sell the American dream. They don’t sell self-reliance. They don’t sell rugged individualism! They don’t sell, “Pull yourself up from your boot straps!” They sell the exact opposite.  But given half the chance, look at what they do. They can’t wait to appropriate that stuff, like Hillary Clinton trying to make you think that she and Joe Biden grew up on the wrong side of the tracks (laughing) and through hard work and stick-to-itiveness, they overcame all these obstacles and have reached the pinnacle.

When do you hear Democrats talk that way lately?  They don’t.

They’re not comfortable talking that way, but they think Trump has ceded the whole notion of America in trouble to them.  They’re missing that.  That’s not what Trump is saying.  Trump is doing what most of the rest of us are doing, lamenting the American greatness that’s being whittled away by people like Hillary Clinton and Joe Biden.  Here’s the next bite.

RUSH:  Stop the tape.  I knew it couldn’t last.  So right off of (imitating Hillary), “No matter what Donald Trump says, America is great, and the American dream is big enough for everyone to share.”  And how’s that American dream manifest?  Government.  Government’s gonna be out there growing and expanding and we’re gonna make the biggest investment in new good-paying jobs since World War II.

I think it’s sad people fall for this.  We have to admit that they do.  But I’d like people to think about it rationally.  How in the world does this work?  How does Washington invest in the best paying jobs since World War II.  When you want one of those jobs, where are you gonna go to get it and what’s the job gonna be?  What is it?  Somebody tell me?  Some of you liberal Democrats, please, tell me, what are these jobs gonna be?

Hillary’s gonna put together the biggest investment in new good-paying jobs since World War II.  Where do I go to get one of them?  And what are they gonna be?  What are these big paying jobs?  I mean, she’s gonna have the best and the brightest come up with this investment, what is she gonna invest in?  Where do you go, if you are an investor, “I want to invest in high-paying jobs,” where do you go do that?  What is the investment?  Where do you put the money?  What’s the job?  What are the jobs?  Maybe finding Hillary’s emails.  I doubt that’s gonna be high paying.  I don’t think they want anybody to find ’em.

But this is insane.  Government doesn’t create high-paying jobs, not of the kind you can get.  The high paying government jobs, if you work at a law firm and the Democrats hire, you represent them at a committee hearing.  That’s a high paying government job when you already have a law firm, and you already have your thousand-dollars-an-hour rate and they hire you.  But there is no government — what are you gonna do?  Where are the jobs?  Where do you apply?  What kind of work you gonna be doing when Hillary’s vast expert team gets finished?

A responsible press corps would ask her these questions.  What are these jobs?  “You know, I work for the Oshkosh Gazette and I make $70,000 a year, I want to make $200,000, where do I go, Mrs. Clinton, to get one of your jobs?”  They’ll never ask that question, but that’s what should happen.

RUSH: Grab the rest of that Hillary bite, number 26.  Play the whole thing again.  We got time to squeeze. Listen to everything she says here in addition to this massive investment to create all these great paying jobs.

HILLARY:  First, we are going to make the biggest investment in new, good-paying jobs since World War II.  (cheers) Second, we’re going to make college debt-free for all.  Third, we’re going to crack down on companies that ship jobs and profits overseas.  And we’re gonna reward companies that share profits with their employees, like the Scranton Lace Company did almost a century ago.  (cheers) Fourth, we’re gonna make sure that Wall Street corporations and the super rich finally pay their fair share of taxes. 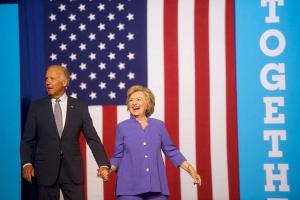 RUSH:  Stop it.  I need some time here.  Folks, I’m just telling you, this is identical to what I heard Bill Clinton campaigning on in 1992. For 25 years the Democrats have been promising the same stuff.  And if you add it up, you’d have to conclude the Democrats have not done any of this.  Apparently there’s still a bunch of Wall Street that they have got to keep from ripping you off.  And apparently they’ve been promising you to get rid of your student loan problem for 25 or 30 years, and they haven’t been able to do it.