Greetings, my friends.  We start here on an upbeat note, the EIB Network.  Excuse me.  Rush Limbaugh, 800-282-2882 if you want to join us, and email address, ElRushbo@eibnet.com.

Trump was in Fairfield, Connecticut. Number one, what’s Trump doing in Connecticut?  There are maybe 10 Republicans there, and only five of them will admit it.  He’s in Fairfield.  I go to Fairfield every summer to play in the member-guest golf tournament at the Country Club of Fairfield.  And I’m telling you, folks, it’s a foreign country.  What is Trump doing there?  I have no idea, but when he was there, he told them in the rally, he said to heck with running against Crooked Hillary. We’re not running against Crooked Hillary. We’re running against a crooked media.

What ticked him off, I guess the New York Times had a story on his chief campaign guy Manafort being involved in some scandal in, where is it, Ukraine or Manafort supposedly benefiting from some policy in Ukraine.  It doesn’t look pretty.  And the Wall Street, folks, the media today is just — I’ve never seen this.  I have never seen what I am witnessing. (laughing) It’s gotten so bad, I’m actually wondering if there’s gonna be a backlash to this.  I’m not wishful thinking here.  I long ago gave up wishful thinking, on anything, not just this, I mean, just anything.

The Wall Street Journal has given Trump an ultimatum: You get out by Labor Day or we’re through with you, and I didn’t know they were ever with him.  (laughing) Sorry to be laughing, but what else are we gonna do here?  The editors of the Wall Street Journal are saying that Trump needs to change his tack or drop out and give the nomination over to Mike Pence.  The Journal editors gave Trump until Labor Day to submit to their ultimatum.  I really don’t know what they’re gonna do if Trump does not submit to their ultimatum. I don’t know what else there is they can do. 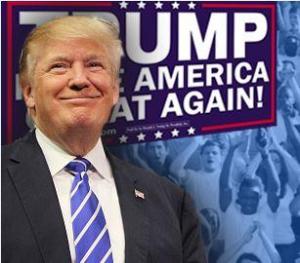 So that’s still two weeks away, so the Drive-Bys at the Wall Street Journal have declared that Trump — at least three or four times they’ve declared that he’s already lost the election.  So it’s amazing.  Trump’s changing a lot of things.  He’s changing the electoral calendar, he’s changing any number of things, and now he’s lost the election, here we are on August 15, with a newspaper actually giving him an ultimatum to get out.  They don’t say what they’re gonna do otherwise.

The New York Times has a story about 20 anonymous Trump insiders who say that he can’t be controlled, that he’s depressed, that he’s down in the dumps, that he’s sullen. He’s inconsolable that none of this is working out the way he thought it would work out.  There are people ostensibly — ostensibly, it’s in New York Times — close to the Trump campaign who say that Trump really thought he’d been able to win over the media with his charm and with his public appearances and with the charismatic nature of his personality and so forth, much as he did during the primaries.

And, I mean, not to get too serious here (chuckling), folks, ’cause I don’t know that called for, but does anybody think this was gonna be easy? What are we doing here?  What did this election really turn out to be about?  It turns out to be trying to take away all of the reins of power and all of the perks and everything associated with being a member of the establishment.  Did anybody think that the establishment — be they Republican, Democrat, Martian, communist, whatever — were just gonna sit around and leave that up to the democratic process? (chuckles) They are not.

They’re not just gonna sit there and wait ’til November whatever the election date is and then throw their fortunes to the great unwashed on Election Day.  So they’ve taken all these — and the media is part of the establishment, and there are many Republicans in it.  Practically anybody in Washington is in the establishment, so they were not gonna be won over.  They were not going to be persuaded to abandon their club or their organization.  You could look at it as globalist versus nationalist.  You could look at it as populist versus conservative.

You could look at it as whatever it is, but it is the powerful versus the powerless, and the powerless were never gonna win this. (interruption) Well, now, wait a minute.  You have to let me finish the sentence.  I don’t want to leave it there. The powerless were never gonna win this in a contest where the nominee tries to persuade the powerful to give it up.  “But, Rush, what about the emails? “What about…?” The emails, the shmemails! Folks, there’s nothing that’s gonna happen with the emails.  I don’t care what’s found in them.  We should know that by now.

No matter what’s found of them, there isn’t any…

Besides, the Republicans are not serious about investigating any of this stuff on Capitol Hill, and so absent that, the media isn’t gonna do it.  I’m sorry.  I love these people.  I love Tom Fitton and all the people at Judicial Watch, but they can’t do this by themselves.  They simply cannot call attention to Hillary’s emails.  They can request them. They can do all this, and they can provide the results, but they’re not gonna go anywhere because there’s no official… The courts are not gonna pursue it.  The DOJ has made it clear they’re not gonna pursue anything, and now Leon Panetta…

(interruption) No, I haven’t forgotten about Milwaukee.  I can tell you what happened in Milwaukee in 30 seconds. It’s just a repeat of all kinds of things.  I’ll get to Milwaukee in a second.  But I’m waiting actually on a sound bite ’cause the sheriff up there had the best sound bite of all this, right about — oh, I forget what it was — an hour ago. I’m waiting for that bite to be put together, and I want to build off of that. So I haven’t… I’m not ignoring it.

Back to Panetta.  Panetta was on  This Week.  Now, Panetta is part of the Clinton war room.  He was Bill Clinton’s chief of staff. When Panetta was leaving as Clinton’s chief, I’ll never forget this.  There’s things in politics that I remember. I, who consume practically everything I see, remember most of what I see and read; it’s an amazing feat.  I don’t have to practice it. It just happens.  Some are born with good brains; some aren’t.  I am.  I’ll never forget Panetta and his resignation day as chief of staff.

(interruption) I said it.  It’s describing a sycophant.  That’s all I mean.  So now Panetta goes on This Week with Stephanopoulos or whoever was hosting it Sunday, and he said, “Can’t we just move on from these emails?  For crying out loud, it doesn’t matter anyway.  This is politics.”  He was talking about the revelations of pay-for-play.  He was openly admitting that entities representing foreign governments were donating to the Clinton Foundation in exchange for consideration as secretary of state or as a future president.

“Hey, that’s what politics is,” and I’m sure to a guy like Clinton and Panetta, politics is selling yourself to the highest bidder, and that’s what it’s become.  And it’s been that way since Clinton was in office starting in 1993. So what’s the big deal?  That’s why Bill Clinton’s running around saying Comey’s full of bull. (impression) “That FBI director, he’s full of bull. That’s a load of bull. What that guy’s saying is bull,” because to them, pay-for-play, selling access, taking money — personally and at your foundation — in exchange for favorable policies, that’s how you do it.

That’s what politics is to these people! There isn’t anything illegal. There isn’t anything shady.  It’s just the new norm.  And, of course, that fits perfectly with the devolution of our culture overall.  But, anyway, when I saw Panetta say it — Can we all just move on? — I imagined practically everybody in the audience watching that show. “Yeah, yeah, ’cause I’m sick and tired of hearing about it,” people are saying.  You know, you can only hear so much, and then there better be some action behind it or it begins to become a tune-out.

We’ve been hearing about Hillary Clinton’s emails for how many months or years now?  Well, it’s a long time, whatever it is.  And we can have news stories about what’s in there. We can have information from Judicial Watch. AP might even run an occasionally a story about what’s in Mrs. Clinton’s emails.  But if the sheriff doesn’t come calling, if the Department of Justice doesn’t… Better yet, if the FBI director goes on TV and says, “There’s nothing here,” then Panetta comes along… (interruption) Well, he did.  He said, “There’s nothing there prosecutable,” even though there is.

But he said, “There’s nothing in here that a reasonable prosecutor would pursue.”  That’s it as far as the low-information crowd is concerned.  So then Panetta goes on TV Sunday. “Can we move past this?” and I guarantee you there’s a chorus of people going, “Yeah, yeah.”  But I… (sigh) Look, it’s always dangerous getting into See, I Told You So mode, because people interpret that as condescending and being negative, and I don’t intend to be either.

But I have never believed it, because I have intelligence guided by 25, 27 years of experience. We are not going to “illegal” the Clintons out of office.  Scandal is not ever going to harm them.  There is no evidence that it ever has, and there’s plenty of evidence that people believe.  There are all kinds of Clinton scandals that people believe, and it doesn’t matter to ’em. (interruption)  No, Trump’s not making a big deal about the emails.  But people who are opposed to Hillary — and I am at the top of that list.

I’m the head of that club, waiting for some kind of magic to happen. People have been waiting for that to happen, to befall the Clintons for as long as they’ve been in national public life.  Nothing’s happened.  I want to remind you, too… I made this comment. Remember when the Supreme Court vacated the convictions of the former Virginia governor Bob McDonnell and his lovely and gracious wife?  You may not remember this.  But they had the evidence on them: $175,000 of basically bribes, pay-for-play. They had accepted all these goodies. 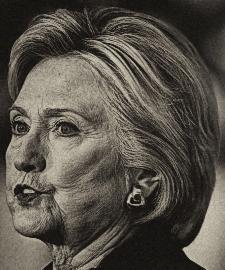 RUSH:  No, no, no.  I do not believe… I find it hard to believe that 20 Trump staffers would go crying to the New York Times.

He was a thug.  We now know who he is, and the cop was African-American.  But the New York Times tried to get everything thinking that we were looking at Gentle Giant 2 here.  So would they report the 20 unhappy Trump staffers would call ’em up and start crying about the Donald?  I wouldn’t put anything past them! I’d be really hard-pressed to believe that, is my point.  Here’s the story here:

“The Clinton campaign is gearing up for Donald Trump ‘to bet everything on one final, major attack,’ according to a fundraising email sent Monday morning by campaign manager Robby Mook.  Mook has come to this conclusion, he writes, because Trump has raised a ton of money but hasn’t spent” any of it yet.   So the Clinton campaign thinks that Trump’s saving up all this money for one big, huge nuclear blast on Hillary and her campaign.  We’ll see.