RUSH: Seth Lipsky in the New York Post today:  “Liberal Attacks on Trump Are So Unhinged, It Might Get Him Killed.” Let me give you a… You know, I can remember it wasn’t that long ago that out of good taste, you wouldn’t even discuss this in public out of fear giving somebody the idea.  You know, it wasn’t that long ago, you didn’t even mention this. If you did, the Secret Service did call you on.

When I saw the headline in the New York Post, I was uncomfortable, damn right — and I’m reading it and I got uncomfortable.  It wasn’t that long ago, you didn’t talk about this stuff.  But Seth Lipsky has waded into it.  “What are liberals going…?” Let me read to you his lede here.  “What are liberals going to say for themselves if Donald Trump gets assassinated?” That’s the opening sentence.  I don’t think they would say much! The question is: What would they do? Where would you next see them? 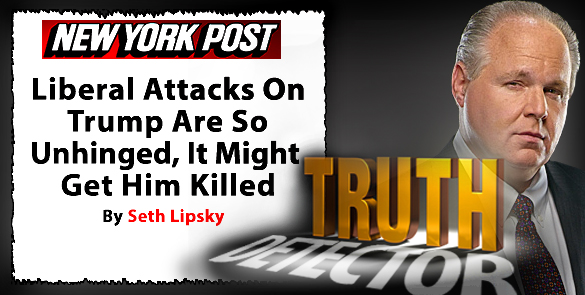 If you don’t know, just take a look at liberals on Twitter and take a look at the other things they celebrate, and you’ll get a pretty good idea what they would do if Trump were to be assassinated.  Mr. Lipsky writes, “That’s a question worth pondering as a new effort is under way to delegitimize The Donald in the wake of his remarks on the Second Amendment.  Leftists are accusing Trump of trying to incite an attack on Hillary Clinton from ‘Second Amendment people.’

“They have been using such intemperate language that it wouldn’t be surprising if someone took a shot at [Trump]. (Feds suspect a British national tried to do so at a rally in June after attempting to grab a police officer’s gun to carry out the assassination.)  Scott Adams, famed cartoonist of Dilbert, had already been mocking Clinton for pairing ‘the idea of President Trump with nuclear disaster, racism, Hitler, the Holocaust and whatever else makes you tremble in fear.'”

In other words, the guy that does Dilbert has been making fun of Clinton because Clinton has already conveyed, Clinton’s telling her supporters… This is the thing. They want to go out and try to make a big deal out of Trump and his Second Amendment comment, and Hillary has already tried to tie Trump to Hitler, and she’s not the only one.  You know, it doesn’t take much to unhinge a bunch of people.  If you convince them that somebody is the incarnation of Hitler, and you do it not in a joking way but you’re dead serious like Hillary and the Democrats have been?

There are some unhinged people out there. “By God, I’m not gonna let that happen here,” they’ll say to themselves.  So they’ve accused Trump of being Hitler after accusing Bush of being Hitler.  They’ve associated Trump with racism, nuclear disaster, the Holocaust.  “The incitement got so bad that Adams, in a satire on Blog.Dilbert.com, ‘endorsed’ Clinton. He did so, he explained, ‘for my personal safety.’ [He said]: ‘My safety is at risk if I am seen as supportive of Trump.'”  So the Dilbert cartoonist did a parody.

We did this in 1992 when I endorsed Bill Clinton.  I did it for different reason.  I did it to expose how Clinton lies.  Dilbert is doing it to make sure he’s not harmed by people that hate Trump.  Seth Lipsky writes “It’s no joke, to judge by the newswires. This week in Bloomfield, NJ, police reported that a man was assaulted with a crowbar for… wearing a Donald Trump shirt.  In the latest brouhaha, Trump tried to mark the difference between Clinton and himself in respect of the Bill of Rights command that the right of the people to keep and bear arms shall not be infringed.

“This is the point Trump was making when, in Wilmington, NC, he warned that Clinton wants to ‘essentially abolish the Second Amendment.’ And that ‘if she gets to pick her judges, nothing you can do, folks.’

“‘Although,’ Trump quickly added, ‘the Second Amendment people, maybe there is. I don’t know. But — but I’ll tell you what. That will be a horrible day. If — if Hillary gets to put her judges — right now, we’re tied [with four justices appointed by each party]. You see what’s going on.’ The Democrats immediately jumped on this. ‘Trump Suggests Gun Owners Act Against Clinton’ is the headline the New York Times put over its Page One lead story, suggesting he was inciting gun-rights supporters to take matters into their own hands.”

So this that they did with Trump, this is nothing new.  This is what they do.  Mr. Lipsky writes:  “Democrats use this kind of talk to avoid discussing the merits of the Second Amendment. They are stuck with a leaked recording that captures Clinton saying the Supreme Court is ‘wrong’ on the Second Amendment.” There’s a recording of Clinton saying that she would use executive orders if she had to to implement drastic gun control measures.  And even quotes Thomas Friedman.  Thomas Friedman, who I saw show up at one of Obama’s jobs summit workshops.

Yes, Mr. Friedman was sitting there just beaming.  He was in his little study group in one corner of the room, and Obama was making the rounds, visiting one group and chatting, then going to the next group in the next corner and chatting, and the next group. And when Obama showed up everybody stopped their hard work, their diligent theorizing and they chuckled and they laughed and I’m sure they all felt special. I’m sure they all felt like they were the creme de la creme, that they mattered more than anybody else, because they had been recruited to create jobs right there in the White House, man, what heady stuff. 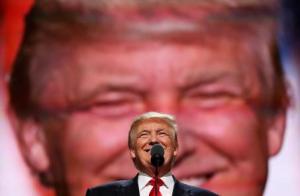 Well, Seth Lipsky points out: “Its foreign affairs columnist, Tom Friedman, goes so far this week as to liken Trump’s remarks to the kind of talk that Israel’s leftists insist got Prime Minister Yitzhak Rabin assassinated. … ‘Forget politics,’ the Friedman says of Trump. ‘He is a disgusting human being. His children should be ashamed of him. I only pray that he is not simply defeated, but that he loses all 50 states so that the message goes out across the land — unambiguously, loud and clear: The likes of you should never come this way again.’ What in the world could he mean by that?”

That’s what he actually wrote in his New York Times piece.  “Donald Trump is a disgusting human being.  His children should be ashamed of him.  The likes of Trump should never come this way again.”  What does that mean?  You have some of these wacko leftists reading the New York Times. So that’s why Lipsky wrote the piece.

Will Smith was over in Abu Dhabi, right?  Will Smith, another brilliant political tactician.  He’s either in Abu Dhabi or Dubai.  He was in the United Arab Emirates.  He’s speaking to a foreign audience and he said the United States needs to be cleansed of Trump and his supporters.  Well, how do you do that?