Hillary: I “Short-Circuited” on Comey Answer

RUSH:  Yeah, yeah, I know.  But I don’t think it’s that big a deal.  We’ve got the sound bite.  You can judge for yourself.  Hillary went out there and made a speech to some black and Latino journalists, and then she took some questions from them, and you know what kind of questions they were?  It was exactly the kind of garbage we got, that Obama got… It was the kind of garbage we got when Obama was up at the Pentagon yesterday discussing the ransom that wasn’t a ransom.  I’ll explain that here in just a second.

Now, Obama was over there in the Pentagon. He does a press conference, and he’s trying to cover up the fact that he was paying a ransom.  “There wasn’t a ransom! Noooo, there wasn’t anything nefarious going on.”  Then he threw it open to the media.  Did you notice the kind of questions they asked him?  They didn’t ask him about that.  They said, “Mr. President, earlier this week you said that Donald Trump is unfit.  Could you tell us how he’s unfit?”  So Obama would answer it, and then the next journalist would say, “Well, could you add a little bit more to that?

“Could you give us even more detail, given your experiences in the White House and all the crazy things that you have to deal with as president? Can you share with us even more why you think Trump is unfit?”  At an Obama event to cover up the payment of ransom for the release American hostages (again) in Iran, the press was only interested in Obama further explaining why he thought Donald Trump was unqualified and unfit. The, uh… I don’t know.  The Drive-Bys tried to pile on to the extent of saying…

There were actually stories earlier this week, “Is Donald Trump sane?  Has Donald Trump lost his mind?”  So it’s in that atmosphere that Mrs. Clinton, I’m sure, felt, “It’s entirely safe for me to go out there and take a risk answering questions from the media.”  So she did.  In fact, let’s start here with sound bites 28 through 31.  We’ve got four of them, and I guess the first two are just parts of her speech, and then the next two are questions.  Here’s the first sound bite. This is in Washington, the National Association of Black Journalists-National Association of Hispanic Journalists Joint Convention.  They pooled their resources and they had one convention for both groups.  Here’s the first of two sound bites of the remarks that Hillary made to them today…

HILLARY: He’s harkening back to some of the most shameful chapters of our history and appealing to the ugliest impulses of our society.  You know the list.  You’ve reported on it.

RUSH: (chuckling) “Yes, you got our memo!  You got the memo from the Clinton Campaign and you dutifully reported what we wrote for you.  You know how egregious this guy is!”  What “era,” by the way?  What “chapter”? What “most shameful chapters in our history” is Trump “harkening back” to?  Would that be when the Democrats founded the Ku Klux Klan?  Would that be when the Democrats, the party of segregation, were turning dogs and firehoses on John Lewis and Martin Luther King at Selma? What chapter is she talking about here that Trump is harkening back to?  In the next sound bite she praises Jorge Ramos.

HILLARY:  Many of you are showing the way.  It’s a badge of honor when Jorge Ramos gets thrown out of a press conference for challenging Donald Trump.

HILLARY:  As Jorge said, “The best journalism happens when you take a stand, when you denounce injustice.”

HILLARY:  So I hope you’ll keep calling it like you see it. Keep holding all of us accountable!

RUSH:  Ha! Ha! Ha! Ah, yes! Hillary Clinton says to the journalists: I hope you’ll “keep holding all of us accountable.” (laughing) Excuse me.  And then “journalism” is defined “when you take a stand [and] denounce injustice.”  All right.  So Trump is injustice, and Jorge Ramos stood up to Trump.  Would it be impolitic for me to say when Jorge stood up, you didn’t know it?  Might be.  So now the Q&A.  The first question from the moderator… I guess the moderator was relaying questions as assembled by the journalists in the audience.

Moderator Kristen Welker said this week: “Mrs. Clinton, you told two separate news organizations that FBI director James Comey said, quote, ‘My answers were truthful, and that what I said is consistent with what I’ve told the American people.’  That assertion, as you know, has been debunked by multiple news organizations, which point out that Director Comey did say that there was no indication you’d lied to the FBI. But he didn’t weigh in on whether or not you were truthful to the American people.”

Yes, he did, and he said that she wasn’t!  If she had lied to the FBI, Comey would have had no choice.  So I’m sure she was told before that 3-1/2-hour interview on Saturday, “Hillary, whatever you do, tell them the truth.  It isn’t going to matter.  But if you lie to them they have no choice and they have to Martha Stewart you.”  So she didn’t lie to Comey but we also don’t know what kind of questions she got. 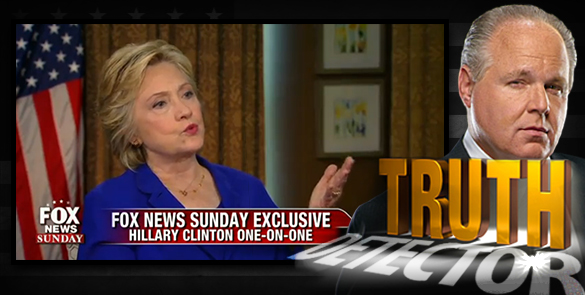 HILLARY: I was pointing out, in both of those instances, that Director Comey had said that my answers in my FBI interview were truthful.  That’s really the bottom line here.  I may have short-circuited, and for that I will try to clarify. Because I think Chris Wallace and I were probably talking past each other.

HILLARY: Because, of course, he could only talk to what I had told the FBI and I appreciated that.

HILLARY: I do think, you know, having him say that my answers to the FBI were truthful —

HILLARY: — and then I should quickly add what I said was consistent with what I had said publicly.  And that’s really sort of, in my view, trying to tie both ends together.

HILLARY: Director Comey said only three out of 30,000 had anything resembling classified markers.  What does that mean?

HILLARY:  Well, usually — if any of you have ever served in the government — a classified document has a big heading on the top, which makes very clear what the classification is.

HILLARY: And in questioning, Director Comey made the point that the three emails out of the 30,000, did not have the appropriate markings and it was therefore reasonable to conclude that anyone — including myself — would have not suspected that they were classified. 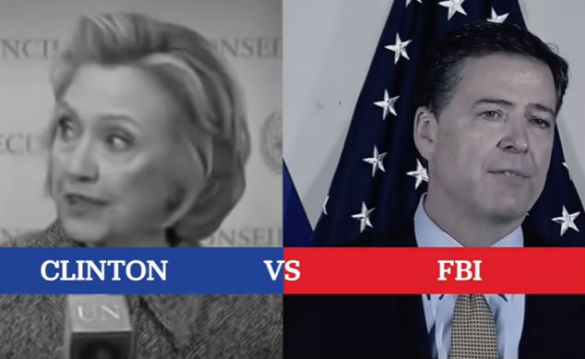 RUSH:  This is what she’s been trying to pedal from the beginning, when the truth is everything on that server that is dealing with her job is assumed to be classified.  Meaning: Private.  And to sit there and say, “Well, there were only three of them that said classified at the top. It’s not my fault.  It’s not my fault that they weren’t properly marked.”  Yes, it is your fault because you should assume that everything is!  But that’s how you do it.

Blame it on other people.

Blame it on the font wasn’t big enough.

Blame it on, “Hey, I’m a machine here!  I short-circuited.  You can’t hold me accountable for this.”

She will now, however, folks… Despite the pathetic nature of these responses, the Drive-By story will be, “Mrs. Clinton, effectively dealt with and repudiated claims that she had lied about dealing with classified information.”  And that will be what low-information people see on the Yahoo! News newsfeed or on Facebook, once the Drive-Bys have a chance to write up the story of her Q&A today before the black and Latino journalists.

“Hillary Clinton, in her first press conference in 10 years, today effectively rebuked charges that she had lied to FBI Director Comey and dealt with classified information.”  Case closed.  Now, the next time Trump brings it up.  “He will not let it go! He just continues to browbeat something he knows is not true! Is he fit for this?”  This is how this will all play out, as they will continue here to try to provide cover and insulation for her while smearing — to the point of destruction — Donald Trump.