RUSH: An overjoyed McClatchy news:  “Democratic presidential candidate Hillary Clinton has surged to a 15-point lead over reeling, gaffe-plagued Republican Donald Trump, according to a new McClatchy-Marist poll.” This is a news story!  Now, bear in mind that all of these so-called gaffes are really media inventions, such as Trump’s terrible gaffe about “asking the Russians to hack Hillary’s e-mail.”  Trump never asked the Russians to hack her e-mail!

Remember the Trump “gaffe” suggesting Mr. Khan’s wife didn’t speak, because under Muslim tradition the wife gives way to her husband? Those are the two gaffes we’re supposed to believe history someday will say brought down the Trump campaign?  Meanwhile, you still can’t find any news about Obama paying ransom.  You can’t find any news about the Obama stewardship of an economic decline in this country that we’re now being asked to accept as normal.

No, the news is all Trump, all the time.  Reuters/Ipsos: “Clinton Leads Among Likely Voters Following Democratic Convention — Among likely voters, Clinton leads Trump 43 to 39%.  Among registered voters, Clinton leads Trump by eight points, 44 to 36%.”  Wait, it’s only 4% of likely voters, which is the gold standard, the gold-standard stamp? Likely voters, that’s a better sample than registered voters or adults.  That’s within the margin of error, by the way.

But McClatchy over there has it at 15 points, Reuters/Ipsos has it at four, and I can find a poll that has Trump up by almost a point, and that poll is called the LongRoom Poll.  You may never have heard of the LongRoom Poll, but it’s out there.

RUSH: Chris in Waterloo, Iowa. I’m glad you waited, sir. It’s great to have you here.

CALLER:  Thank you, Rush.  It’s an absolute honor to speak to you.

CALLER: I’ve been listening to you for over 20 years.

RUSH:  I really appreciate that more than you’ll ever know.

CALLER:  Listen, I think these polls are wrong.  Okay?  I want to revert back to something you said in past elections.  Now, I realize Obama won two elections, but I believe it was you that stated there were some people out there in the polling data back in the past two elections that said, yeah, they would vote for Obama because they didn’t want to be harassed. Because if they said they weren’t going to vote for him, they would be viewed as racist.

CALLER: Yes. I think what is happening here is the same thing in reverse is happening with Trump.  There are people out there that will never admit they’re going to vote for Trump for whatever reason. They just don’t want to be harassed.  But when they get behind that curtain, they’re going to pull the lever for him.

RUSH:  You know people like that?  Why do you think this is the case?

CALLER:  You know, I don’t have the statistics or the demographics.  I know all the analytics that go with elections and things like that.  I’m basing this purely off of emotion.  Okay? Trump stirs emotion in people.  Right now, I think, the main emotion is anger.  I don’t know if that’s a good motivating emotion, but I think that’s what’s happening right now.  Trump is their voice.  He’s the one that can say things. And sometimes I myself will kind of cringe at his delivery, okay? 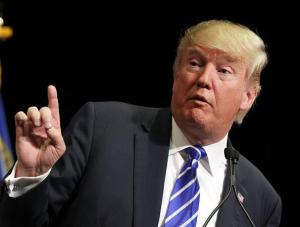 CALLER:  Absolutely, I do.

RUSH:  But it doesn’t matter.  You’re still going to —

CALLER:  But then I chuckle, because I love it because he’s giving it to them!

RUSH: Right. You cringe, but you’re still going to vote for him?

CALLER:  Absolutely, I’m going to vote for him.  But, listen, I’m not going to put a Trump sign in my yard or anything like that.

CALLER:  Because I just don’t think… I just don’t want to take the harassment.  This is my point.  I think I would get my neighbors riled up.  They would say something. “Oh my gosh, he’s…”

RUSH:  That’s why you think there’s a Wilder Effect with Trump.  I told the story yesterday.  I went up to Connecticut, Fairfield annual country club member/guest.  We go up every July.  My host said, “Bring a bunch of those Never Hillary bumper stickers from your website.  I’ll pay for them.” I said, “Okay,” but I didn’t pay for them because it’s my site.  I could get them free.  So I grabbed 50 of them and I took them up there, and he could only give 10 away.

There were 50 people that wanted them, but 40 people didn’t want to have anybody know they were supporting Trump.  Now, this is a deep-blue state, and all of this is anecdotal.  I will never say that this proves that there is flawed polling data on Trump.  But peer pressure is something profound and with the media all-in for Hillary and furthermore with the media now going all Palin on Trump, it’s the same situation.

So they create the impression that she’s a doddering fool, and they cement that.  So, therefore, anybody that says they support her is going to have, “What do you mean? She’s a blithering idiot! How in the world can you…?” Nobody wants to defend that.  Most people can’t.  So they just shut up.  This is what the theory is with a lot of people supporting Trump.  I always was of the impression, during the primaries, that it was a very “proud-ful” thing to say that you were a Trump supporter!

I mean, you went out there, you attended the rallies, you beat your chest like Tarzan in the jungle and you took on all comers.  But now that the media has gone 180 and is now determined to destroy Trump, people have gone silent.  You’d better hope that that’s the case out there.  It’s something people reach for when they start to have doubts.  I’m glad you called, Chris. Thank you very much.