RUSH: Jacksonville, Florida.  Brian, great to have you, sir.

CALLER:  Hey, Rush! Great to finally talk to you.

RUSH:  Thank you.  I very much appreciate that.

CALLER:  I went to a rally last night.  They had 16,000 people in our rally, and 5,000 were kept out because there wasn’t any room.  It was standing room only, and it was just electric inside.  The paper this morning printed a story about it, and said there was only 10,000 people. Then they interviewed a bunch of the protestors.  There weren’t very many protestors.  It was awesome.

RUSH: Let me ask you a question. In the first place, that’s not unusual.  I remember when I did the Rush to Excellence Tour.  Whatever you see in America, I’ve done it. Whoever out there is doing things now, I’ve done it.  And I did this back starting in ’88 all the way through… Well, for two years I traveled every weekend to a different city as we got stations in these cities to affiliate with the program.  I went out and did the Rush to Excellence Tour.  Every weekend except four — except holiday weekends, when I didn’t go.  I did that for two straight years.  I remember in a lot of places, there were protestors. Like in Baton Rouge, there was a mother and her daughter.  There were 5,000 people inside.  It was capacity for this venue.  There was a mother and daughter carrying signs outside, and what do you think was on the front page of the paper Sunday morning in Baton Rouge?

RUSH:  It was the mother and her daughter protesting! Two people protesting, 5,000 inside having the time of their lives, a great time.

RUSH: “Limbaugh Stirs up Controversy in Baton Rouge.” That was the headline.  Two malcontents out front! The fact that it happened in Jacksonville? That’s par for the course.

CALLER:  It’s just a created narrative that they’re trying to portray, you know? After the last few weeks, Trump’s falling apart and he’s on the ropes.

RUSH:  Let me ask you a question.  I need to ask you… Seriously.  Do not infer a tone of sarcasm or attack or anything. I’m genuinely curious.  You’re like anybody else. You consume media every day, and I’m sure you’ve seen these stories that the Trump campaign is imploding and people are planning an intervention. Trump may be thinking of quitting.  He’s down by 10  to Hillary.  There’s no way Trump can win, on and on and on.  Why did you even go?

CALLER:  Well, because, you know, it’s time for a change in Washington DC.  We’ve been doing the politically correct stuff for so long, people are tired of it — and all those Senate and congressional leaders, we’re tired of them, too.  So this is where we’re starting.  I think that it’s a movement, like you say. And I think the media, they didn’t make him and they can’t break him.

RUSH:  I understand.  What I’m trying to get at is you obviously don’t believe in any of that.

CALLER:  No. It was packed and everybody was energized.  People were chanting.  It was great.  I mean, it was awesome.

RUSH:  Was Trump in a good mood?

CALLER:  Yeah! He was telling jokes.  He’s funny.  I’ve never listened to him talk.  He talked for an hour and a half without notes.  He’s just off the cuff and he kind of rambles a little bit.

RUSH:  Okay.  I was going to get to some of that.  Another question for you, since you were our on-the-scene reporter.

CALLER:  Well, he started saying, like, CNN did 200 negative pieces about him. But before he could finish, he started talking about something else.  So he kind of… You know, he kind of gets off track a little bit. But he came back to it.

RUSH:  Did he get back to CNN and 200 stories or did it languish?

CALLER:  Yes, sir. Yes, sir. He got back to it, and then he finished this point. But, you know, he talks without notes.  He didn’t even have notes, nothing.

CALLER:  Hour and a half.

RUSH:  Is it long enough, too long? Should he shorten up?

CALLER:  He went over, like, his whole kind of platform.  He talked about the wall. 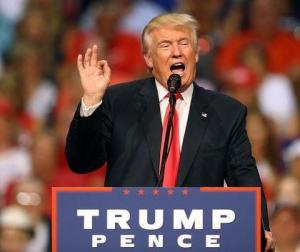 CALLER:  No, I’m not going to complain.  The only thing I had to complain about was the parking and the traffic.  But other than that, inside the rally it was great.

RUSH:  Well, that’s with any event you go to, other than a Ray’s game.

RUSH: So you don’t think that he can improve it by reducing the number of issues he talks about? Say, focus on four or five for the appearance rather than this improvisational rant and go wherever his stream of consciousness takes him?

CALLER:  I think that he needs to detail some of the messages he’s trying to get out.  You know, he needs to be more specific.

RUSH: What he’s going to do, actually. Not just how, but what the end result will be.

CALLER:  Just kind of tell you.

CALLER: He tells you and then he says —

RUSH:  You want to hear exactly how he’s going to whoop their ass.  I know that feeling.

RUSH:  Exactly right.  You want to hear deep, dark details of it.  I totally understand it.  Well, the reason I peppered you with these questions is because another person I know watched it via streaming video, and had pretty much the same assessment you did. It was energetic. It was go, go, go. It was Trump’s stream of consciousness.  He would be thinking of something in the middle of the sentence, stop himself, and start talking about what thought he just had.  Sometimes he doubled back and got back and found his place; other times, he didn’t.

But the person that reviewed Trump for me last night said, “There’s just too many issues.  He needs to pare it down.  He just talked about whatever. Whatever came to his mind, he brought it up.  He needs to pare it down and maybe go no longer than an hour.”  Everybody has their opinions on these things, and he’s gotta do it the way he feels it.  He’s gotta do it.  One thing I advised him here is that there’s going to be all kinds of people trying to change him.

By the way, that’s happening, too.

All this criticism is aimed at trying to get Trump to change what he’s doing.  Why would they want that?  The people that want Trump to lose are convinced that he is. They’re convinced that he’s now finally imploded.  “This is it.  By going on and on about Khizer Khan, that’s it. He’s jumped the shark now.” All the people that wanted this to happen, why are they in a panic?  Why are they mad?  Why are they worried about anything?  They wanted it to happen!  Many of them expected it to happen.  The thing is, it may not actually be happening, other than on the pages and the TV screens of media reports.

I appreciate the call, Brian.

You know, even all the polls cannot be conducting as to reality because you’re a busy farmer out there, you’re a busy construction guy.  The guy laying blocks, pouring concrete.  These guys do not take the time to respond to polls.  But there’s one poll that they will take the time to respond to, and it’s not a poll.  It’s election day.  And they realize that there are millions of these people out there that will possibly come out on election day and take their gravy train from them and I think that’s what they’re scared of.

RUSH:  Look, you’re right.  But I’m going to react to that.  I’m not trying to throw cold water on it.  But I hear that every election.  For as long as I’ve been alive, the people on the losing side of the polls, one of the ways that they react to it to try to keep everybody bucked up is to say what you just said, “You know what, there’s a lot of people that don’t tell the truth to the pollsters. There’s a lot of people that don’t even talk to those pollsters. There’s a lot of people out there not even being counted.  You can’t count on these polls.”  And yet pretty much every election the polls end up being right.  Not always.  But this year is different.

This year it may be.  It may be, because this is not a traditional election.  It’s not a liberal versus conservative election, sadly.  I guess it’s Republican versus Democrat, but there’s much more.  There are a lot of people out there who don’t vote, traditionally.  Robert Costa, his comments on Charlie Rose last night, I’m telling you, he works at the Washington Post.  I’m telling you if he’s out there saying that there is this group that never votes, but they do this time, they’re energized, polling is not going to find them and all bets are off.

When you understand that half of the registered voters didn’t vote in 2012, a little less than half, and you put that together with 70 percent of the American people who will tell you in a poll they think the country’s headed in the wrong direction and then you add to that the supposed Trump implosion is not creating joy, if you put all of this together and you don’t find Hillary Clinton in the midst of any of it, she’s not out there trying to take advantage of it because that’s the media’s job and we’re not even at Labor Day.  They tried to tell us elections were won in June.  Remember that, even before convention.

Now the rule of thumb, “Oh, yeah, the election is always won, Mr. Limbaugh, after the two elections you take a look at the polling data, ten days after both elections and that will pretty much tell you what’s going to happen, Rush. You can pretty much count on it.”  Wait a minute, you told me in June it was over.  Hillary had an 11 point lead in the polls in June.  And then the Republican convention came and that lead vanished in some polls, it was three points in others.  What happened to your theory that the election is over in June?

“Well, the campaign came earlier this year, Rush, and sometimes that can upset the formula. But I guarantee you, Rush, now that both conventions are over, look at the polling data, that pretty much tells you where it’s going to end up.”  Whenever Hillary has a significant lead in the polls, they come out and say, “Well, this is traditionally the time where you look at polling results and you can find out how the election is going to turn out.”  It’s a stacked deck.