If you need money fast and you are a foreign government trying to ramp up a nuclear weapons program and further alienate the Middle East and your neighbors, and, if you are attempting to snooker the United States in the process, then simply call Washington and tell ’em you want the Affordable Ransom Act headquarters. That you have a kidnap victim, and that you’re willing to sell it, because our president is into single-payer kidnapping.

Could somebody explain to me why Obama is under Iran’s thumb?  Seriously, now.  Why do we give them what they want?  Why does everything Iran want, they get?  We even have, I think it was Howard Dean, I meant to mention this yesterday and it didn’t cross my mind in time. But I think I had the story yesterday, maybe the day before, that Howard Dean is out there saying Iran’s not really a Muslim country, not in the sense that we understand Islam and Muslim countries, you can’t categorize Iran that way.

We can’t?  The Islamic Republic of Iran, the people’s Republic, whatever they call themselves, it’s the Islamic Republic of Iran, but it’s not really a Muslim country.  Oh.  Well, then that must be why we are so eager to do business with them.  You remember when Obama said — this is back in 2008, in July, then Senator Barack Hussein Obama, presidential candidate said (paraphrasing), “We cannot continue to rely on our military in order to achieve the national security objectives we set.  We gotta have a civilian national security force that’s just as powerful, just as strong, just as well funded.”

Little did we know that Obama was going to employ the Affordable Ransom Act featuring single-payer kidnapping.  Little did we know the federal government was going to increase in size because it was going to assume all ransom payments.  Now, where did we leave off on this program yesterday? Oh, I remember.  We were talking about Barack Obama’s excoriating Donald Trump for being unfit for office, for being unsuitable.  Or maybe even being mentally unfit to hold the office of president of the United States.

Somebody sent me a note this morning.  I get a note like this from this guy at least two or three times a week.  “Can you believe nobody cares about this?  Can you believe that nobody cares that Obama is a paying ransom now?  The official policy of the US government, we don’t negotiate with terrorists, we don’t pay ransom.”  Not with Obama.  We do all of that and more.  But he was saying, “Can you believe it doesn’t get a rise out of anybody?  This is outrageous.  This is demeaning and diminishing the United States of America on public display.”

I wrote back, and I said, “You realize that CNN’s not even covering this story?”  And the response was “Yeah, but nobody watches CNN.”  Well, the others aren’t covering it much, either, and if they are, they’re using the administration line that this was not ransom.  Come on, folks, is what the Regime is saying.

Here’s John Kirby on America’s Newsroom.  Bill Hemmer, who had an interesting comment today about politics and the presidential campaign unrelated to this.  I’ll see if I can remember it here. I remember it now.  I don’t want to forget it in the next ten minutes.  But Bill Hemmer spoke with the State Department spokesman John Kirby about Obama and the Affordable Ransom Act, $400 million in cash in various currencies.  It was in Euros, Swiss francs, a number of different currencies, in exchange for American hostages.  And Hemmer said, “The series of events last January looks like it’s ransom. It looks like Tehran said, ‘You have to give us the money and you have to do it in cash.'”

Look, Hillary said that she didn’t hear James Comey say that she had lied. She didn’t hear that at all.  “I’m sorry, Chris Wallace.  I’m sorry, Chris. (stammering) I — I just didn’t hear it that way.  I — I — I… What I heard James Comey say was that the only thing I should have done was have two email addresses.  Other than that, there was nothing to see there.”  This guy, Kirby says, “There’s no ransom!” “But the Iranians are calling it ransom.”  “Well, you can’t trust the Iranians!” Why not?  You do! You trust the Iranians with nuclear material.

Except that it wasn’t!  But they kept insisting, and the media dutifully played right along, and right here there’s not… I don’t know if you sense people in the country being agitated or getting a rise out of this.  But the media’s still talking about Khizr Khan and Donald Trump.

RUSH: This is Steve in Daytona, Florida.  Great to have with us.  Hello, sir.

CALLER:  Hey, thank you for taking my call, Rush. I appreciate it, and I thank you for all that you do for us little peons here out in the world.

CALLER:  Thank you very much.  So, listen, actually I’m in Deltona and I’m heading towards Daytona for the Trump rally which is happening here in an hour.

RUSH:  I thought Snerdley didn’t hear you and misspelled it.

CALLER:  It’s halfway between Orlando and Daytona Beach, to be exact.

RUSH:  How do you get halfway between Orlando and Daytona Beach?

CALLER:  No, it’s in Daytona Beach.  I’m heading there now.

RUSH:  So you’re in Deltona.

CALLER:  Now that we have that straightened out —

CALLER:  I’m sure you understand.  (laughing)  So you started the show off by posing a question as to why our beloved president would jump every time Iranian asked for something.

CALLER:  I think the answer is very obvious, and it’s Valerie Jarrett.  She is his gal pal.  You know, she says, “Jump;” he asks, “How high?”  She’s the closest thing to him, probably closer than his wife.  And, you know, she was born in Iran.  Her parents are from there.

RUSH:  I know that.  I know that’s true.  I know she’s Iranian; her parents are. How do you know that she’s got that kind of relationship with Barry?

CALLER:  Well, you know, she’s the one that kind of huddled the two of them together.  She got him introduced to the Daley Chicago politics group.

RUSH:  That would be Bill Ayers and Bernardine Dohrn and all the others. Jeremiah Wright.

RUSH:  That other group of people that show us how qualified Obama is.

CALLER:  So, you know, I think she has tremendous influence over him.  I mean, she really… From what I understand, I don’t —

RUSH:  Well, look.  I don’t know if you’re right, but there’s gotta be some explanation for this because Obama does seem like he wants Iran to get whatever they want.  And if you’re just joining us and you’re wondering why we haven’t talked about the ransom, we did.  It was the first thing we talked about.  I’m calling it the Affordable Ransom Act, and I think it’s a smashing success.

Well, it clearly was ransom, and the Iranians said it was.  The Iranians, by the way, have been honest about their relationship with us in this nuke deal from day one.  They have been upfront and honest. No, I take it back.  They lied about one thing.  They lied to John Kerry — no.  It wasn’t them.  I take it back.  They haven’t lied.  It’s the Regime that’s lied to us.  It was John Kerry who told us — he served in Vietnam, by the way.  He’s the secretary of state that replaced Hillary, and he told us that the reason we were negotiating a nuke deal with the Iranians is ’cause there were some moderates there.

It wasn’t the mullahs, it wasn’t the ayatollahs, that we had a new moderate Regime there that was ascending to power and that’s who we’re doing the deal with. And it turned out the Iranians said there’s no such thing as that, we don’t have any moderates here the way he’s talking about it, the mullahs approved this deal or not.  It’s the Regime lying to us.  The Iranians have called this a hostage ransom payment.  And it was. 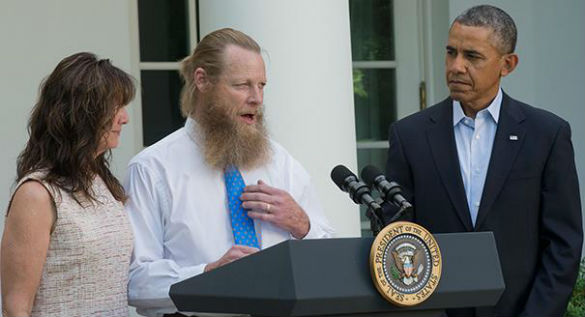 This is in violation of US policy.  This is, despite Bergdahl, I mean, that’s bad.  I remember the days, folks, I’m old enough to remember an arrogant little press conference Obama did yesterday with the president of Singapore, and he went on and on and on from his arrogant platform about (paraphrasing), “Well, you know, Romney and McCain, they were okay, I mean, if either one had won I could have tolerated that.  I think the country would have been okay.  Not optimum, but at least they understand the rule of law. At least McCain and Romney, yeah, they understand the Constitution.  And I disagree with ’em on everything, but at least, you know, they were okay.”

I forget what the attacks against McCain were.  I think they were age related, subtly so.  Was it temperament?  Age and temperament.  Oh yeah, because that’s right.  They portrayed McCain as being a little unhinged. Went off the handle too easily, got a little dictatorial, Napoleonic complex.  Yeah, yeah, yeah, yeah, I remember all that.  Yeah, they forgot he was a maverick.  That maverick status, that ended the moment the Democrats chose their nominee.

RUSH: Here’s Josh Earnest.  He’s the White House press secretary.  This is during the daily press briefing today.  A reporter said, “Hey, this 400 grand that you gave the Iranians, was that a ransom payment for the people that were released?”

EARNEST:  No.  It was not.  It is against the policy of the United States to pay ransom for hostages.

REPORTER: So it was just a coincidence?

EARNEST: Iran released five Americans who were unjustly detained on Iranian soil and we resolved a 35-year-old financial claim with the Iranians in a way that saved Americans potentially billions of dollars.  There are many other benefits we can get into as well, but those are the highlights.

RUSH:  Are you kidding?  Did you hear that?  Okay, so what happened was that there were five Americans who were unjustly detained on Iranian soil.  And we, we were really tough.  We don’t negotiate for hostages.  We don’t pay ransom for hostages.  The Iranians just released ’em.  That’s all.  And, by the way, we resolved a different thing that had nothing to do with the hostages.  We resolved a 35-year-old financial claim of the Iranians in a way that saved Americans potentially billions.

So, in other words, we snookered the Iranians.  For some reason they gave up the five sailors and then we snookered ’em on the same day.  We gave ’em 400 grand, which in effect — by the way, the next bite, I’m not gonna play if for time, the next bite he says the money was for Iran to build up it’s infrastructure. Kind of like we did with our stimulus package, you remember that back in 2009. So we gave ’em 400 grand for their stimulus, to rebuild roads and bridges and schools in Iran.  But we got a big deal out of this, Earnest said, yeah, because we actually could have paid much more than that, but we snookered them.  He didn’t use the word, but that’s how they’re trying to sell this.  And of course the Drive-Bys eat it up and report it, and the low-information crowd swallows it.