RUSH:  Do you think Hillary Clinton might be saying to herself about now, “Why did I waste my money and time picking Tim Kaine?”  I mean, the choice of Tim Kaine to be veep was to take the party in a direction opposite Crazy Bernie supporters, right?  The choice of Tim Kaine was supposed to convey that the wackiness of Democrat Party primaries was over and it was serious business ahead. “We’ve got a great couple centrists here! No radical wackos.”  And then along comes Julian Assange dumping 19,200 emails, which do what?

What is the upshot?

The Bernie Sanders people are angrier today than they have ever been at any time in this whole campaign because the WikiLeaks email dump establishes and proves that the Democrat Party, from the highest levels, rigged the race and their guy never had a chance.  It was all rigged. It was nothing but a show from day one.  Now, there might have been Crazy Bernie supporters that suspected this, but this is proof.  This is court-of-law proof.  This is irrefutable evidence.

And the Crazy Bernie people don’t care where it comes from.  They don’t care that it came from WikiLeaks.  What they now know for sure is that they were robbed.  They were mocked, they were taken advantage of, they were used, they were being laughed at behind the scenes.  All of these emails applauding all of these players for making it look like Crazy Bernie had a chance, but everybody knew from day one that he didn’t.

So all of the efforts that Hillary Clinton and the Democrat Party — every effort, every length they have gone to to try to prevent the image of a unified party totally at peace, at one, devoted to the notion of destroying Trump and the Republicans — have been blown to smithereens.  And the party is now more divided than at any time during the primary process.

And Crazy Bernie is trying to tamp it down himself and is failing.  Crazy Bernie… This is great. Crazy Bernie went and had a meeting, a rally with his supporters, with his delegates this afternoon in Philadelphia.  And our microphones were there.  We have four sound bites.  And the last two are the meat and the money, but here’s the first to set this all up…

SANDERS: The support we have received from every state in this country has been extraordinary, and the grassroots activism is unprecedented in modern American history.

RUSH:  We edited cheering, ’cause this went on and on.  This whole thing took 12 minutes to happen here, and a lot of it was applause and cheering — and a lot of boos when Hillary’s name came up.  Now, this is the real Bernie speech.  Somehow I don’t think this is the substance we’re gonna be hearing when he speaks at the convention tonight.  ‘Cause he went and he met with these people to try to bring ’em aboard now. He told them you’ve gotta unify behind Hillary, and they don’t want any part of it.  Here is the second sound bite…

SANDERS:  Well, a year has come and gone.  We’re not fringe players anymore!

SANDERS: We’ve shown the entire world that our ideas are not some crazy, wild, utopian fantasies! They are ideas supported by working people from one end of this country to the other.

RUSH:  And these supporters of his went rabid.  They just went over the top.  We edited all the applause here just to stay to the meat of it.  Now, the crowd really goes wild here when Crazy Bernie danced on the grave of “Blabbermouth” Schultz.

SANDERS:  As I think all of you know, Debbie Wasserman Schultz resigned yesterday as chair of the DNC.

SANDERS:  Her resignation opens up the possibility of new leadership at the top of the Democratic Party that will stand with working people!

RUSH:  So happy she’s gone! They are ecstatic. They’re dancing on her grave at the Bernie rally.  And then cheers turn to boos when Bernie gets around to mentioning Hillary Clinton and unity.

SANDERS:  We have got t’defeat Donald Trump —

SANDERS: — and we have got to elect Hillary Clinton and Tim Kaine.

SANDERS:  Brothers and sisters, this is —

SANDERS:  This is the real world that we live in.

RUSH:  Right.  He’s trying to be a good soldier.  He’s trying to get on board with Hillary, and they don’t want to go.  They don’t want to get on the train.  This is not… I don’t know how much this is gonna go on during the week.  I don’t know what its ultimate manifestation is gonna mean. But Trump is making an appeal to these people and he will continue to make his appeals to these people, and Hillary is gonna lose some of them.  But just Bernie mentioning her name, this crowd went from 150% positive and upbeat to just booing their hearts out.

And so do not doubt me.

This is not by any stretch what the Democrat Party envisioned for the first day of this four-day celebration of whatever lack of this justice and that justice and whatever. Economic justice?  Environmental justice?  What the hell is environmental justice?  But, anyway, it’s the lingo they all respond to.  Choosing Tim Kaine was supposed to mitigate some of this.  I don’t know how, but, I mean, it was supposed to.  But Hillary Clinton remains remarkably unpopular.

I really am beginning to wonder about this.  You know, Trump announced in June of last year. So his campaign is now over a year old.  There has been plenty of time now for the professionals in the media and professionals in the political consultancy class to realize that this is different; that you can’t analyze, you cannot counterprogram, you cannot campaign against Trump in the normal playbook/manual ways that have been honored by time and tradition.

You just can’t do it.  And yet they refuse to see it, and they continue to try to rely on the old stand-bys to beat Trump.  And one of the old stand-bys is that whoever has the most money is automatically gonna win.  Well, we just want to remind you here: We opened the program with the fact that Trump has had a pretty big convention bounce in the polls.

He’s got a six-point bounce in the CNN poll and a number of other polls, and it’s the first bounce post-convention for any candidate since the year 2000. There haven’t been any convention bounces since 2000, and the reason for the most part is that conventions have been scripted and programmed.  Only one hour of them has been televised, the 10 to 11 p.m. hour.  I’m talking about on the broadcast networks, not cable.

It wasn’t that long ago that a political convention got three hours primetime every night for all four nights it was on.  Not that long ago the networks all decided, “You know what? We’re not giving up our time.  These are scripted. There’s no news here, there’s no surprises, there’s no drama.”  And so they’ve only covered the last hour live because that’s where the primary important speeches of each night were scheduled.  And yet the tune-in factor for the Republican convention was up. But more importantly is this.

Hillary Clinton has spent $22 million in ads before the Republican convention.  She had an 11-point lead before the Republican convention, two weeks before.  She had an 11-point lead, and she was spending money — I think the number I heard was like 11 million or $10 million in one buy to cast Trump as unprepared, as ill-suited, wrong temperament, not qualified.  And these ads were running all over the place.  They were getting bonus plays on cable news.  The news networks would run these ads free of charge as news stories.

So whatever amount of money she was spending, there was even more airtime for these anti-Trump ads.  At the same time, Trump hadn’t spent a dime.  Trump did not spend a dime on ads before or during the Republican convention.  And what happened?  Trump got a convention bounce.  He didn’t spend any money, Hillary dropped $22 million.  It got her nothing.  In the old-time political handbook, in the time-honored traditions and techniques and instructions of the political rule book, that should have translated into a massive Hillary Clinton bump-up in the polls.

And Trump should have been creamed.  Trump should have lost ground because her ads were effective and they were not answered.  Well guess what?  “Hillary Clinton’s campaign is pulling its television advertisements from Colorado, at least temporarily, after building a sizable and durable lead in the traditional battleground state.

“The decision could reflect increasing confidence about Clinton’s chances to capture Colorado’s nine electoral votes in the fall. But a Clinton campaign official, granted anonymity to discuss the campaign’s internal operations, stressed the campaign’s advertising strategy against Donald Trump will change constantly over the next three months.

“Colorado was part of the Clinton campaign’s initial, general election advertising campaign, which began in mid-June and cost at least $22 million. But Monday is the final day of that ad buy.” 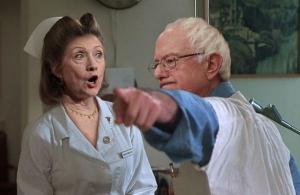 They have to buy her media.  And now they’re dealing with the shocking reality that it isn’t working.  So a bunch of them are sitting around thinking, “What do we do now?”  And in that, friends, you have to understand, none of this was supposed to be happening this way.  These people live lies.  They live illusions.  They live in their craftily constructed cocoons, and they have their beliefs.  And one of their beliefs is that this country loves Hillary Clinton.  Absolutely adores Hillary Clinton.  This country’s yearning for Hillary to be president.

Even when they see all these anti-Hillary people show up at Bernie rallies, it doesn’t register.  They chalk it up to extreme kookism, a small bunch of people, isn’t gonna matter the end of the day. They’re gonna end up voting for Hillary anyway.  They hide, they run from the truth, they wall themselves off from it, don’t know how to deal with it when things don’t go according to script.  And that is where they are on the first day of their big convention.

RUSH: This is Andrea in Philadelphia.  Great to have you on the program.  Hi.

CALLER:  Hello, Rush.  I just wanted to let you know about a fun billboard campaign that’s being run on I-95 in Philadelphia for the DNC.  It says, “Dear Hillary:  We have your back,” signed with a little heart from the media.

RUSH:  (laughing)  Is it in a place where a lot of people are gonna see it?

CALLER:  It is.  It’s right between the center city and the airport, so all the conventioners coming and going —

RUSH:  I don’t know if you people have been to Philadelphia, but you have the link at the football stadium, and then you’ve got a convention center and baseball stadium and right in a row, they’re on Broad Street, right?

RUSH:  And that’s where that billboard is?

CALLER:  Yes.  So, returning from the airport — I was at the airport yesterday — coming back, I actually live in New Jersey —

CALLER:  — and heading northbound on 95.

CALLER:  It just made me smile.  I thought you would appreciate it.

RUSH:  A lot of people that live in Philadelphia say they live in New Jersey.