My Predictions for the DNC

RUSH: Don’t let me forget this, Mr. Snerdley — I’m gonna make some predictions for you about what we’re gonna see at the Democrat convention next week. It’s gonna bear out everything I’ve said since the beginning of this program today.

For example, I’ll just give you one heads-up.  Patricia Smith, the mother of one of the four killed at Benghazi, was ridiculed, was lambasted, was ripped to shreds, was destroyed by the Democrat Party and the media for having the audacity to take the stage at the Republican convention and talk about the death of her son.  It was exploiting a death for the purpose of criticizing Hillary.  It was just unbecoming.  The Republicans should be so ashamed, so ashamed.  And then when she had the audacity to say that she blamed the death of her son on Hillary Clinton, that was it. The media and the Democrat Party went into full destruction mode, and they did everything they could to try to destroy the credibility of this woman and the Republican Party and the convention, and yet you watch what happens next week.

We are going to see at least six family members of people, supposedly innocent people gunned down, murdered by the cops.  The cops are once again going to be portrayed as the enemy next week on the stage at the Democrat National Convention.  Law enforcement is going to be held up as the enemy for the express purposes of rallying the votes of a bunch of people as a result of having told lie after lie to them, such as “hands up, don’t shoot,” such as the mess that was Baltimore.  And there’s not gonna be one condemnation you’ll see anywhere in the Drive-By Media.

The Drive-By Media will applaud this.  The Democrat Party has developed this tactic.  They parade ostensible victims of Republican policy, of evil American culture, you name it, they parade ’em before congressional hearings, and now they’re gonna parade them before their convention.  The contrast is gonna be stark, and the Democrat Party and Hillary Clinton are going to once again mount an assault on law enforcement next week, making the calculation that there are many more victims of law enforcement that will applaud that than there are members of law enforcement; strictly a numbers game.

RUSH: Look, folks, I mentioned earlier at the top of the program that I wanted to make some predictions of what the Democrat convention next week is gonna be, especially bouncing off this way that they’re try to characterize the whole Republican convention plus Trump’s speech last night — dire, dark, filled with hate.  As you know by now, having listened to the program today, I believe they own those concepts.  I believe they market those concepts.  I believe the Democrats benefit from creating hate.

Now, in addition to my predictions, I want to urge you to, Dinesh D’Souza has an absolute — if you liked Trump’s speech last night, any part of it, all of it, you are gonna eat this movie up.  This movie tells the truth about the Democrat Party like you don’t see done anywhere.  For example, you may know all this, but imagine seeing this on the big screen with an audience of people seeing it and people who’ve not heard this kind of stuff asserted before, and it’s not just asserted.  Dinesh D’Souza proves it. 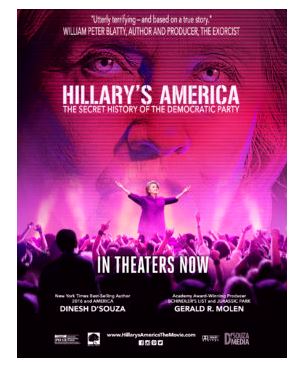 They are the party of slavery.  They were the Southern plantation owners.  The great Democrat senators of the 1950s, J. William Fulbright, all of these great Democrats were segregationists.  One of the greatest political crimes has been to successfully transfer all of that in people’s minds to the Republican Party.  The Democrats’ relationship to the Ku Klux Klan, it was Democrat governors that refused to allow black students to enter the universities.  Lester Maddox, George Wallace were all Democrats.

And this movie exposes this in ways that you haven’t seen done.  You may have read it in books, you may have heard people like me talking about it, but you’ve not seen this portrayed on the big screen.  Progressive historians have covered all of this up and managed to transfer all this to conservatives, to the Republican Party.

But America didn’t do these things.  You see, America’s not guilty of slavery.  America’s not guilty of this.  The Democrat Party is.  The Democrat Party was the home of all this stuff.  Now, what is the relevance of all of this history to today?  The relevance is that even today the Democrats have created urban plantations that resemble these old rural plantations.  These new plantations, the inner city, they’re in Detroit, Oakland, Baltimore, rundown buildings, run down dwellings, broken family structure, high levels of violence.

Democrats provide residents a meager provision, but there’s no real opportunity to get ahead.  These are places of hopelessness.  These are places of fear.  And while these dilapidated places exist, what are these people afraid of?  They’re afraid of Republicans.  They’re afraid of conservatives who haven’t had a hand in any of this.  And Obama is so upset at people who have left the inner cities and moved to suburbia that he’s got new housing laws that are being implemented all over this country while nobody notices, and laws such as this.

If a developer, say, let’s pick Westchester County in New York, which is an upwardly mobile suburban area.  If a developer wants to build a housing development, in order to be granted zoning and other permissions, he has to also build what is called affordable housing within the development.  Obama and the left are so ticked off that some were able to escape the inner cities.  That’s not fair.  That’s not right.

So what Obama wants to do is take the inner cities to the suburbs, and that’s what he was in the process of doing, and it’s all part of Obama’s scheme to make sure that certain segments of America pay for the discrimination and their mobility and their freedom and so forth, to avoid certain other things and people.  It’s despicable in Obama’s world.  But it’s the Democrat Party.  And I’m telling you, Dinesh D’Souza’s movie shows these were exactly the same features of the old slave plantation.

Wait ’til you see the comparison between rundown places like Detroit and Oakland and Baltimore with the old slave plantations, in terms of where the slaves lived.  So America is not a dystopia, but certain places in America look like it, and the Hillary Clinton Democrats are responsible — all the while Hillary and Bill Clinton are personally getting filthy rich using the power they have acquired to sell access and secrets!

You’re gonna see victims, families of victims shot by the police.  You’re gonna see an image that portrays that the cops are indiscriminately and wantonly shooting innocent people of color and minorities.  That’s the image of this country and Democrat Party will portray. You talk about negative? You talk about hate? You talk about fear? You talk about dark? It’ll be four straight days of nothing but whining and moaning about all the unfairness — and keep in mind when you hear it, they’ve been running the show for 7-1/2 years.

Everything they’re complaining about, they have had control over.