RUSH: During the course of the program we’ll be sharing some anecdotes from last night in Philadelphia. But I have to tell you, I want to thank all the people at WPHT. They just put on a great show last night, very well done, very professionally done, our affiliate down there, 1210 AM, The Big Talker. But the audience, those in Philadelphia that were in the audience last night, and this is hard to say because I don’t want anybody in previous audiences to be offended or misunderstand, but when I was introduced and strutted out on stage with my full confidence and arrogance on display, I got the — Mr. Snerdley, this might have been one of the largest and most sustained and loudest standing ovations. It would not stop — and, of course, I only egged them on once. It almost brought me to tears. I’d never been to Philadelphia to speak or anything like this before. This theater was just so gorgeous, and the crowd was just rabid. There were some libs, and I knew there were some libs in the audience because I got a little heads-up, and I told ’em when I started, I said, ‘Some of you may not last the whole evening, but I guarantee you, if you leave early, you will not forget this,’ and they started trickling out after about an hour, you know, one every five minutes or so, four or five of them finally left.I waved good-bye to them each time they left. They didn’t turn around and wave back, but the audience was just fantastic, and I had somebody tell me afterwards, ‘They just wanted to thank you for hanging tough on the ‘phony soldier’ bit.’ If that’s what it was, I appreciate it. We will have some audio sound bites. In fact, one of the aspects of the major announcement coming up in a little over an hour from now on this program will feature a little clip from last night’s Rush to Excellence Tour in Philadelphia.

CALLER: How you doing, Rush?

CALLER: I was at the Rush to Excellence Tour last night, and I have to tell you, I had the pleasure and honor of meeting President and Mrs. Reagan some years ago, and I heard two of his speeches in person. Yours last night was the best I have heard since. You absolutely hit a grand-slam home run, knocked it completely out of the park. 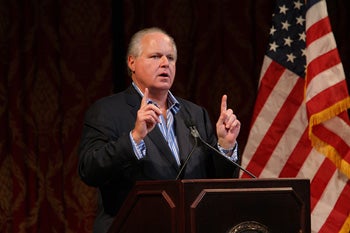 RUSH: Well, you’ve made my day. I appreciate it. You know, I walked out of there thinking the same thing. I was feeding off the energy of the audience. I could tell by the — no, I could tell by the way the audience reaction was that it was going well. I felt good last night, felt in a good mood and so forth. I only had five drinks before I went out. Just kidding! I can’t say these things anymore with all these watchdogs out there. (laughing) No, you guys were fabulous in the audience. Where were you sitting?

CALLER: I was in the fist balcony just to your right about two sections back. I wasn’t very far from you.

RUSH: Well, it’s a beautiful auditorium, and I really appreciate your kind words. It was very nice of you to say.

CALLER: It was great to hear you, Rush, keep up the work because you are the biggest thorn in the liberals’ side. I just love listening to you. I’ve listened since right after the first Gulf War, and you’re the best thing I’ve heard since Reagan.

CALLER: Well, I’ll tell you, let me tell you one other thing. If Ronald Reagan hadn’t converted me to the other side, you definitely would have.

RUSH: Well, again, I thank you.

RUSH: By the way, H.R., I forgot to mention this to you last night. I don’t know if any of Congressman Waxman’s investigators were in attendance at the Rush to Excellence Tour in Philadelphia last night. I’m going to assume that they weren’t, since the event sold out so long ago. So please send a tape and a transcript of last night’s performance at Philadelphia’s Academy of Music to Congressman Waxman’s office. Just label it ‘Waxman Investigators,’ care of his office and so forth. Yeah, Saturday delivery. Send them a little CD and also put an electronic version of the transcript on the same CD. You know, you don’t have to send pages. Let ’em print their own paper up there. It’ll cost them a lot less than it costs us.

CALLER: I’m a public speaking professor here, and I would like some tips from you for my students. How do you do it, three hours every day?

CALLER: Well, you’re not speaking from a script. You’re able to do it extemporaneously. So, yeah, the radio program.

RUSH: Well, I also do my live appearances that way. I just have a little outline. I went 90 minutes last night, and I had five lines written on the outline, maybe six, to remind me just of areas I wanted to cover. I think that there’s no substitute for experience, but the thing that enables this to happen is passion. It is passion that leads me to want to know as much as I can about what I’m talking about and lack of fear to tell people what I think, and that leads to confidence. So I come in here every day confident, not afraid of what I’m going to say and not afraid that I don’t know what I’m going to talk about, and I never have the fear that, ‘Gee, what am I going to mention today,’ because I always prepare. Plus, I’ve been doing this a long, long, long, long time. By the way, I do read things, quote from a news story or something, but I know what you mean. I do not write monologues. 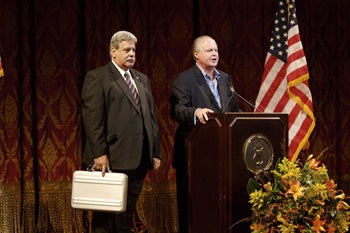 RUSH: You bet. Does that help?

RUSH: Your lecture is tomorrow. Okay, then the four keys are: preparation, passion, confidence, lack of fear.

CALLER: Great. I’ve got it. Thank you.

RUSH: You bet. The professors are calling me. I’m the one without the degree.